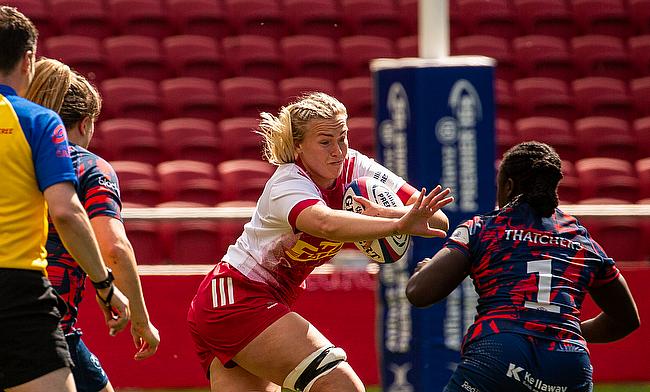 England chosen host for Rugby World Cup 2025
Victoria Rush Interview: 'Reading men say they want to be better at accepting women’s sports, that for me is special'
Simon Middleton Exclusive: Standout moments, England’s strength in depth and growing the game
Sarah Beckett Exclusive: 'It's probably been the toughest year in my career'

Self-reflection is something which Rosie Galligan isn't entertaining just yet.

The England and Harlequins lock has been in fine form this season and says she is “living in the moment” as the champions continue their quest to defend their Allianz Premier 15s crown.

On a personal note, the 23-year-old is loving being back at Quins and considering her performances at club level have seen her shine for the Red Roses, no one would begrudge Galligan if she did feel content about what she has achieved this term.

During the recent Six Nations, Galligan shared her stories of when she was diagnosed with meningitis as well as the career-threatening injury she suffered at the beginning of 2020, so when you add all of these different factors into her journey, the heights she has been able to hit this year become even more impressive.

“I do sit and sometimes reflect on the journey I’ve been on but I’m just living in the moment at the minute, really enjoying my rugby and I think I’m just grateful for what I’ve been through and where it’s taken me,” Galligan tells Talking Rugby Union’s Elizabeth Cartwright.

Proud to be back in a white shirt.

“I’ve still got a lot to learn and growing to do as a player. I’m just really enjoying being back and playing at Harlequins after a pretty successful campaign for myself.”

Galligan returned to club duty last weekend as Harlequins produced an excellent display to see off Bristol Bears in front of a record crowd for the West Country side, and the victory only added to a pleasing couple of months for the second-row.

On the international scene, England secured yet another Grand Slam as Simon Middleton’s side continued to flex their muscles ahead of this year’s World Cup and they stretched their remarkable winning streak to 23 matches by beating their old rivals France away from home.

“The atmosphere was incredible,” said Galligan, who came off the bench after 52 minutes in Bayonne. “We silenced the French crowd a few times and just to be able to say we did that was such an incredible experience.

“To have all of the girls there too was great. We all bought into what we wanted to achieve in the six weeks we were together. All in all, it was a fantastic campaign for all of us.”

Over the course of the Six Nations, Galligan and the Red Roses experienced record numbers of spectators with England’s games against Wales and Ireland producing a combined attendance of nearly 31,000.

The buzz around the women’s game was boosted this week after England was confirmed as host for the 2025 World Cup and the Rugby Football Union is determined for the tournament to leave a lasting legacy.

One of their aims is to try and sell out Twickenham for the final and given what Galligan has witnessed with the Red Roses and with Quins last weekend, it could be an achievable goal.

“I think Bristol did a really good job at marketing the event last week,” she adds. “It was a great way of enticing these fans in and trying to build a platform. It was a fantastic day. Obviously, the fans were a bit quieter when we scored but the noise of the Bristol crowd was amazing and it was so nice to see so many young girls wanting to be there and support women’s rugby.

“It’s a great feeling and that’s why I love doing it. That’s one of the reasons we all stand outside and have photos taken and sign autographs after the games. It’s to show people that we are normal girls that can play for our country. I think that’s a really important part of the game and how we can showcase ourselves in the best light. I love it.”

With the business end of the Allianz Premier 15s campaign now upon us, the hype around the women’s game will continue as Galligan and Harlequins target back-to-back league titles.

Quins’ recent win over Bristol not only secured their place in the play-offs, but it was arguably one of their strongest displays since the turn of the year and now Galligan and her side are preparing to take on Loughborough Lightning this Saturday at Franklin's Gardens.

“I think it’s another opportunity to showcase how far we’ve come as a team,” she concludes.

“Since coming back from camp, there’s been a lot of things we’ve had to work on in a short space of time. However, we’re all buying into the next few weeks because obviously we want to be in that final place in weeks to come.

"At the minute, it’s all about focusing on us and feeling exactly like we did at Bristol - excited to play in front of a big crowd and hopefully help develop girls rugby and get them to see what it’s all about.

“Obviously they [Loughborough] have Emily Scarratt and Helena Rowland in their squad. They’ll be the key threats that we’ll be trying to get rid of. It’s just a case of being mindful of those two and they do have some big ball carriers in the forwards too.

“For us, we’ll be focusing on what we can do well as a squad and we’re playing Exeter the following week so we will try and implement the things we want to achieve and not worry too much about the other teams.”