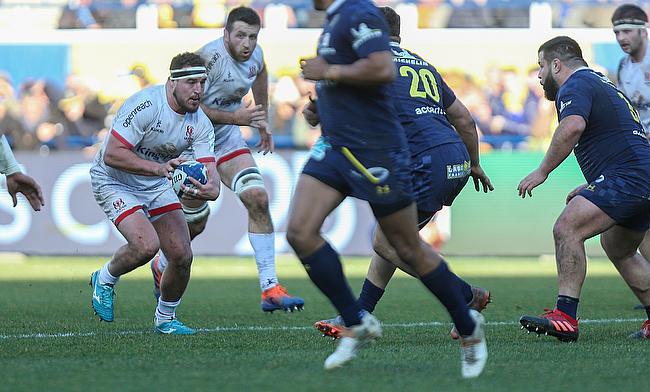 Rob Herring’s last time on a rugby field was far from perfect.

Starting for Ireland at Twickenham, he played for over an hour against England and the 24-12 loss has hung over his head for nearly six months.

Two weeks later, Ireland’s home game against Italy was called off due to the cornoavirus pandemic but for Herring, the break couldn’t have come at a better time. When lockdown was enforced, his wife was eight months pregnant and the pair welcomed their first child at the start of April, giving the 30-year-old plenty of time to get to grips with parenthood.

Now, Herring prepares for entirely new challenge. Playing Connacht on Sunday, Ulster have got to win just one game in order to qualify for the playoffs. Following their Pro14 campaign, the Irish province then have to contend a Heineken Champions Cup quarter-final against French powerhouses Toulouse and with a run of high intensity fixtures to come, Herring says that he and his teammates are well prepared for what is ahead.

“For us, we do a lot of what we call robustness,” Herring started. “In the time we have been away from the club, we have just been trying to get our bodies ready for this long period that we are going to have.

“In saying that, our S&C guys at the club have been really good. I feel like our programme to getting back playing has been incredible. Guys have got that break behind them and then returned to intensity in the right way so that your body can peak. In terms of the schedule coming up, I know that everyone says it is long and to be honest, because we haven’t played in so long, I am just so buzzing to get back on the pitch.”

It has been 14 years since Ulster last picked up a domestic title, winning the Celtic League in 2006. Recently retired Rory Best was the last remaining member of that side, but now it is Herring who is pulling on the number two shirt for both club and country.

Having been one of the more consistent sides in the Pro14 in recent years, Ulster have talent across the park. With Irish internationals in virtually every position, Head Coach Dan McFarland is credited with having had a massive influence on the team and Herring was also quick to praise the Englishman.

“I definitely think that in the last two years with Dan coming in and the fresh coaching staff, it has been really good,” Herring said. “It has completely changed the atmosphere at the club and I think, in the last two years, you have probably seen a big improvement in the way we play.

“We have some really good young guys in our squad coming through and it is funny, you see the young guys coming through and they just push that excitement level and the intensity up at training. I definitely think that as a whole squad we are pretty close at the moment and we work hard for each other and hopefully people see that in the games we play. We fight for each other on the pitch.”

Called up to the Ireland World Cup squad after an injury to Leinster’s Sean Cronin, Herring began his run in the national team. Acting as deputy to Best for the final time in Japan, he proceeded to start in each of Ireland’s Six Nations games.

After the postponement of the competition,  it was recently announced that Ireland would be able to complete their campaign and Herring is keen to re-establish himself in Andy Farrell’s side. However, the former London Irish player is understanding that his performances for his province will dictate his international fortunes.

“I had a bit of a run in the Six Nations and I really enjoyed it,” Herring said. “I really enjoyed it, but that was a long time ago now. We had been having a good season until that point and now it is up to us to go and do that again. They are going to be picking the squad from fresh, so the only way you get into that squad is by playing well for your province.

“Sounds like a cliché, but it’s true. Obviously, the more success we have with our province, the more chance we have of our squad getting called up. I think it is a bit of a collective effort there. We all want to play well as individuals and as a team. Hopefully that will show for higher honours.”

Ulster restart their Pro14 campaign away to Connacht.