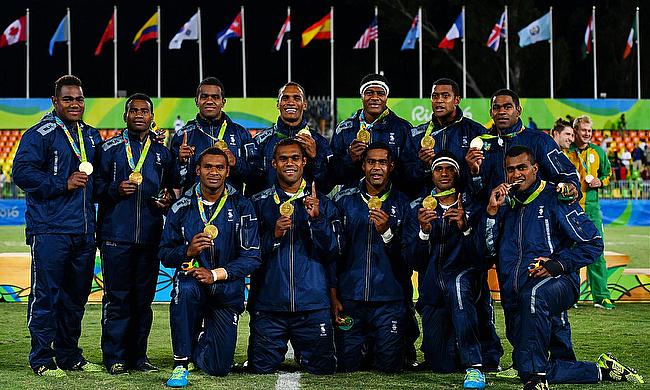 Fiji Sevens side with their Olympic Gold medals
©World Rugby

The 2016 Rugby Sevens Olympic Tournament reached its conclusion on Thursday with the twelve nations in attendance treating a near-sellout crowd to another day of spectacular rugby in its maiden Olympic outing.

Lewis Hughes recaps every one of the day’s games, including a very one-sided final..

The final day of the 2016 Olympic Rugby Sevens tournament began with Kenya salvaging some pride after a disappointing tournament, outmatching Brazil – to leave the tournament hosts the unwilling recipients of the competition wooden spoon.

Billy Odhiambo – one of Kenya’s few bright spots in a tournament that fell far short of their expectations as 7th seeds – shone again, grabbing a hat-trick of tries, including two long-distance efforts following clever inside balls from his teammates - to leave the East Africans as deserved winners.

Willie Ambaka notched Kenya’s other try, showing some impressive foot speed to round his man in his own 22 before sprinting the length of the field to touch down. Brazil twice came close to replying with tries over their own, only to ultimately be called back for earlier infringements.

A brace from Carlin Isles was to prove decisive as the United States overcome a stubborn Spanish side, 24-12, to clinch a ninth place finish at Rio 2016.

Spain had taken a deserved early lead through Pablo Fontes following a storming start that saw them camped in the American half from the initial kickoff, before Danny Barret barrelled over in trademark fashion to give the USA a slender 7-5 lead.

Then, it was Isles’ time to shine, his lightning pace and quick feet making a mockery of the Spanish defence leading the USA to a 12-5 half-time lead.

And although Los Leones responded superbly through Angel Lopez shortly after the restart to keep the game competitive, sustained American pressure resulted in a walkover try for Maka Unufe before Isles’ individual brilliance came to the fore again;

A quickfire double from brothers Akira and Rieko Ioane and a brace from Regan Ware propelled New Zealand past France, 24-19 , in a fierce back-and-forth contest that guaranteed the All Blacks a place in the 5th place play-off.

The Ioane brothers touched down within 2:17 of each other – both times the result of surging runs from the halfway line – to condemn France to defeat despite the Blues enjoying the lion’s share of play in the first-half.

Despite Reagn Ware’s early score, a double from Stephen Parez, who was the beneficiary of some lackadaisical Kiwi defending had given France a 12-5 half-time lead.

However, the Ioanes’ combined brilliance – Akira powering past Terry Bouhraoua before Rieko cleanly outran Virimi Vakatawa – handed the ascendancy back to New Zealand before Regan Ware powered over off the back of a scrum to assure the All Blacks of victory.

There was however still time for France’s Sacha Valleau to dance over in the corner for a commiserative score.

Argentina produced one of the performances of the tournament in masterminding a 24-point comeback to defeat Australia and set up a clash with New Zealand in the 5th place play-off.

A superb first-half from Australia had seen the Wallabies jump out to a 21-point lead via two powerful finishes from Tom Cusack and a smart try taken by virtue of Con Foley’s quick footwork.

However Gaston Revol struck with the clock dead at the end of the first-half to instigate the Puma comeback, and the 30-year-old found himself over the whitewash for a second time after he burst through the Australian defensive line off the back off a set-play.

Now down only 21-12, it was Matias Moroni who would step into the spotlight, the winger offering support on Juan Imhoff’s shoulder to crash over from in-close to bring the deficit down to only two points.

And with the clock dead, the Argentineans orchestrated the finishing touches to their scintillating comeback; phase after phase of continuous play saw the South Americans play out of their own half before a short pass found a rampaging Moroni who powered over and give the Pumas a shock, albeit deserved, win.

Fiji became the first nation to book their place in the Olympic Rugby Sevens final with a superb – victory over Japan in Thursday’s first semi-final.

In a 14-minute showcase of trademark Fijian flair – with one-handed off-loads aplenty – the tournament favourites overwhelmed a valiant Japanese side – likewise one of the most impressive teams of the competition so far.

Vatemo Ravouvou went over after only 69 seconds although Teruya Goto responded shortly after to tie the game at five apiece. However, a bulldozing run from Josua Tuisova gave the Toulon man his fourth try of the tournament and set the Fijians on their way to the country’s first medal finish in Olympic history.

With the Fijian’s superior fitness beginning to make itself apparent – they enjoyed an unparralled amount of possession in no short part due to their exquisite off-loading skills that kept Japan at arm’s length throughout the second half-  Semi Junatani crossed in the corner to put the game out of reach before Jerry Tuwai rounded off a fine display with a try off his own to continue the South Pacific nation’s quest for gold.

In what amounted to a semi-upset given the Blitzboks’ second place seeding going into the tournament, winger Norton’s try – which saw him dance around Dylan Sage one-on-one before touching down – was to be the winning score, but not before Britain endured some tense final moments that eventually ended with Dan Bibby’s steal at a South African ruck.

South Africa had taken a slender 5-0 lead at half-time thanks to Kyle Brown’s close-range effort; the result of an immaculate off-load from the ground from Philip Snyman. But Cecil Africa could not add the extras, and the Blitzboks were denied once again when Rosko Specman’s sprint to the line, following a superb midfield break, was cut down by eventual hero Dan Norton.

And with the game in the balance, Norton would strike with a moment of individual brilliance to give Team GB a narrow, but deserved victory to guarantee at least a silver medal.

The afternoon session of Finals Day at the Rio Olympics began with France eking out Australia for 7th place with a narrow 12-10 victory.

A back-and-forth game, the missed James Stannard conversion of an Ed Jenkins try in the final minute would prove costly as France prevailed by a whisker to condemn Australia to a disappointing 8th place finish.

Henry Hutchinson had given Australia a dream start with a try in the second minute before the 19-year-old was guilty of criminally overrunning a French kick-and-chase which fell into the waiting arms of French standout Terry Bouhraoua for the easiest of walkovers.

And France furthered their lead after half-time when Julian Candelon cut a superb inside line through the Wallaby defence and danced around two defenders to grab Les Blues’ second.

There was yet time for Australia to pull it back through captain Jenkins’ effort in the corner following a superb break from Jesse Parahi, but Stannard was unavailable to convert to force extra time.

For the second time on Thursday, it was the Ioane brothers – Akira and Rieko – who served as catalysts for New Zealand as the All Blacks picked up an important, (somewhat) pride-salvaging win over Argentina, -, to finish 5th at the Rio Olympics.

In a disjointed first-half, Ioane’s rampaging run was the only beacon of excitement as both teams struggled to string together much in the way of coherent possessions.

The game livened up after the break however; first Gillies Kaka waltzed his way through the Argentine defence from in-close (before selflessly handing the ball off to Tim Mikkelson) then Rieko joined his brother on the scoresheet with an irresistible burst over the try-line.

Argentina did finish on a high though. Although the 17 point deficit was too much to overcome with less than a minute remaining, Juan Imhoff (courtesy of a superb Axel Muller break) and Matias Moroni both crossed in quick order to give the raucous Argentinian crowd reason to cheer.

South Africa responded to their disappointment at having lost out on a finals place to Great Britain with a comprehensive 52–14 victory over Japan.

Although the Brave Blossoms kept the game close for the first 15 minutes, the Blitzboks’ all-round superiority (particularly at the breakdown) came to the fore as the second-half wore on, Cecil Afrika (twice), Justin Geduld, Specman (to complete his hat-trick) and Cheslin Kolbe all dotting down.

Juan De Jongh had sparked South Africa off to an ideal start with a try in the opening minute before Rosko Specman made a superb jinking run through the line to dive in under the posts. Yusaku Kuwazuru responded for Japan, carrying De Jongh over the line with him to bring it back to 14-7 but Specman struck again, finishing off a flowing counter-attacking move that saw the Springboks move the ball from one end of the pitch to the other, 21-7.

After the interval, Kazuhiro Goya threatened to once again usurp the South African’s sense of control with a herculean sprint to the line following an earlier off-load. However, Cecil Afrika – as he has all tournament – continued to pull the strings and he twice capitalised on ruck turnovers to score. With the game winding down, South Africa ran in tries six, seven and eight to convincgly claim the tournament’s bronze medal.

In a display that reaffirmed Fiji as the dominant power in the game of Sevens, the Gold Medal match transpired to be little more than a coronation ceremony for the South Pacific nation who were in complete control from the opening kickoff to the final whistle.

Within seconds Fiji were ahead, Osea Kolinisau diving over the line after a short series of typically Fijian inter-play that sent the British collective flailing fruitlessly.

From there the floodgates opened; Jerry Tuwai went over after five consecutive off-loads, Jasa Veremalua bursting through a defensive gap, Leone Nakawara profiteering off of a mis-handled restart – and that was just the first-half.

The game – and tournament – was over by half-time but still the Fijians came; Vatemo Ravouvou, Josua Tuisova and Viliame Mata all crossing to pad the lead before Dan Norton pulled back a consolation score late on. But in the end it mattered little on what was a historic evening for both the nation of Fiji and the game of Rugby Sevens.

Team of the Tournament

Gave an expertise in jackaling at this year’s tournament serving as the key behind South Africa’s breakdown success which bled into so much of their all-round play.

It is nigh on impossible to pick out individual players from Fiji’s collective brilliance but Veremalua was the central heartbeat behind the eventual Gold Medal winners’ play all tournament.

Arguably the tournament’s standout individual performer. Strong, quick, with acute positioning and world-class awareness. Made it look so easy, regardless of the level of competition.

Integral to the surprising success of Team GB; a central figure to whom the eclectic mix of players could gravitate towards. His tactically kicking and decision-making was almost faultless.

Diminutive, slight but lethal in open play with unbelievable footwork and attacking instincts, Bouhraoua shone in an otherwise mediocre outing for Les Blues.

A nightmare proposition for opposite wingers, Müller proved to be a freakish combination of abrasive power and lightning pace. Will terrorise defences in the Top 14 for Toulon next season.

Another Toulon winger, Tuisova was equally destructive as a finisher on the other wing for Fiji. Strong enough to barrel over defenders and quick enough to around them, Tuisova is the prototypical modern winger.