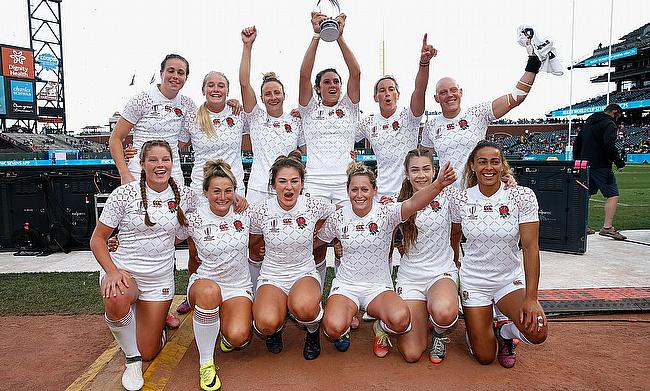 England Women and Men's teams will have an aligned programme ahead of the 2018/19 season at the England Rugby Sevens High Performance Centre at The Lensbury in Teddington.

The Women's side will move from their present base Bisham Abbey to Teddington and will have the opportunity to share facilities and best practice under the guidance of head coach Simon Armor.

“When we look ahead to this Olympic qualification season we are so excited that after many years of the men’s and women’s teams operating independently of each other that the women are now joining us here at The Lensbury,” said head of England Sevens Simon Amor.

“This integration gives us the opportunity to create a really strong England Sevens culture and identity where the men and women can learn so much from each other. This sharing of knowledge is so important to us as we continue to challenge each other to be the very best that we can be.

“There is also a huge opportunity for our squads to get more seven-on-seven training so that when the men’s or women’s squads go out of the country, those players who stay behind in the UK will have the chance to train together as part of a larger squad which is such a big benefit to both programmes.

“The joint facilities are fantastic and the ability for players to have shared conversations and to talk about the game of sevens is so important to their development – this is probably the most exciting thing for me as head of both programmes.”

As well as the Rugby Europe Sevens Grand Prix Series, both squads will compete on the HSBC World Rugby Sevens Series this season with the Dubai, Sydney and Paris legs all being dual men’s and women’s tournaments.

This season carries added significance in that it is the qualifying season for the Tokyo 2020 Olympics where the top four teams on the men’s and women's 2018/19 HSBC World Rugby Sevens Series will earn their spot. As with Rio 2016, England is the nominated nation for Team GB to qualify for Tokyo 2020.

As part of integrating both programmes, England Men’s Sevens’ James Rodwell and Charlie Hayter will take on the role of player coaches for the 2018/19 season where they will work with both squads. England’s most capped player Rodwell will focus specifically on aerials, kick offs and lineouts while Hayter who has been with England since 2014 will lead on contact and scrums.

Additionally, former England Sevens captain John Brake re-joins the programme this season as academy manager and coach for the men’s and women’s programmes. Brake made his England Sevens debut in 2007 where he represented England at two Commonwealth Games and the 2013 Rugby World Cup Sevens alongside numerous World Series and Rugby Europe competitions.

On the England Sevens coaching set-up Amor added: “We are really excited to bring James Rodwell and Charlie Hayter into the coaching team in player coach roles - they will be strong additions to the team.

"We are sorry to lose Tony Roques who has done an excellent job over the past four years - we will miss him but we have a strong team in place now for the next season.

"Charlie and James’ understanding of the sevens game in their respective areas is world-class and the opportunity to develop them as individuals on and off the field and to further enhance the integration of the men’s and the women’s squads will bring great benefit to the programme.

"It’s also great to have John Brake on board as the men’s and women’s academy coach to further develop the younger talent we have coming through.”