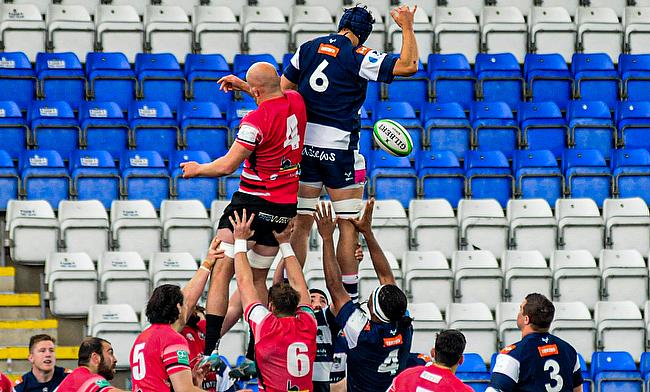 Coventry ended a solid season on a high
©Nick Meredith

Well, that’s a wrap for the regular season and what a fitting finale it was to a thrilling, quickfire campaign.

Credit must go to the clubs, staff, players and all involved with the 11 teams who battled it out to provide a glut of entertainment and drama with the play-off final still to come.

Round 11 was certainly no exception and despite Saracens v Hartpury becoming the first game to fall victim to a Covid postponement, the other eight teams in action put on a high scoring show in the sun.

For the final time this season here’s your regular round-up:

As widely reported and mentioned in the preview, this game was scratched on Friday afternoon due to a Covid outbreak in the Hartpury camp.

On Monday, the Disputes Committee ruled that the game would be a 0-0 draw with no league points awarded to either team due to finding no fault on Hartpury’s behalf.

Added to this, the Gloucestershire outfit confirmed they would not be able to play on the only reserve weekend [5th-6th June] as players would be still isolating under Covid-19 protocols whilst their injuries mean the club would be unable to field a squad.

As a result, Saracens are set to finish as runners-up to Ealing ahead of their upcoming play-off final, but Mark McCall’s side have the right to appeal…

By far the widest result from the quartet of games that Saturday eventually offered, it still took until the final 20 minutes for Coventry to see off Richmond.

Even though the hosts slipped to their ninth defeat of the season, it was a welcome sight to see fans back in at the RAG as Cov confirmed fifth place and their moniker as this season’s best travellers.

The Midlands club secured four bonus-point wins from five matches on the road through this mini campaign, with their only loss being a narrow defeat against Doncaster. The 21 away points they collected was the best in the Championship for 2020/21.

After a back and forth opening in which both sides repelled one another, Richmond managed the first score. They turned the ball over to counter before Luc Jones was put away for the opening try, Rob Kirby’s conversion attempt unsuccessful after hitting the post.

That lead swung three times in the following 10 minutes as both teams traded blows.

First, Cov hit back with Ryan Burrows tapping and crashing over from five metres and Tony Fenner added the extras on what turned out to be a perfect day from the tee for him.

The visitors then broke the sequence of try trading to extend their lead before the break. Another flowing team move ended in Andy Peters crossing the line, Coventry ahead 21-12 at half-time.

The second half started in much the same vein as the first as Richmond opened the scoring through Jones before Burrows drove over for Coventry.

Into the final quarter and Richmond managed to get themselves back to within a score thanks to a Kirby penalty, but that was as close as it got.

A Coventry lineout drive resulted in Luc Jeannot rumbling over before the game was well and truly put to bed as Josh Barton added the finishing touches to another tidy score.

Ampthill may have won the war of finishing higher in the table, but Bedford won this battle to secure local bragging rights.

It was the perfect send off for Blues chairman Geoff Irvine who is stepping down after two decades to assume the honorary role of club president.

As expected, it was a fiery old affair where momentum continually swung and those in attendance more than got their money’s worth.

The game burst into life as Bedford found themselves 10-7 ahead in the opening minutes.

The Blues opened the scoring with Josh Gillespie capitalising on a poor exit to dot down before Ampthill quickly levelled through Suvwe Obano’s score. Will Maisey and Louis Grimoldby were on target with their respective conversions.

Minutes later, Maisey added a penalty to put Bedford back in front and they then added to their lead as James Lennon went over out wide.

Charlie Beckett hit back from close range for Ampthill before becoming involved in the game’s flashpoint minutes later.

Beckett was sin-binned for holding onto Oli Curry in a ruck with the latter sent off for reacting with a stamp, adding to the red card he received in this fixture during pre-season.

That only seemed to further galvanise the Blues in the first period at least, ticking through their usual slick back play to add further tries and secure a bonus point thanks to Elijah Niko and then Matt Worley for a 27-14 lead at the break.

The A’s weren’t going to lie down, though, as they quickly cut the deficit from close quarters via Llewelyn Jones’ try before capitalising on the numbers game to take the lead for the first time.

Departing Bedford skipper Sean McCarthy was sent to the bin on his final appearance and Ampthill punished his indiscretion through Syd Blackmore’s score to edge ahead.

The visitors were unable to build on their momentum and when Dave Ward was sent to the bin, becoming the second man to be given a farewell card, Bedford made them pay with Oskar Hirskyj-Douglas going over to take them back ahead 32-28 with almost 20 to play.

Not through want of trying on Ampthill’s part, but that was to be the final scoreline as Bedford held out for a big derby win.

Old friends Jersey and Cornish Pirates served up another absolute thriller which eventually saw the Reds take the spoils by the narrowest of margins despite a late Pirates comeback and being outscored five tries to four.

Surprisingly the opening quarter passed without a score, but from there, the game sprang into life.

Jersey’s Brendan Cope slotted a penalty to get the ball rolling, then Tom Williams followed up soon after plucking a ball from the air and racing in from halfway to help his side into a 10-0 lead.

Pirates debutant Patrick Schickerling forced his way over to get the visitors on the board and in the closing stages of the half, the sides traded another try apiece.

A Jersey catch and drive ended in Eoghan Clarke going over before AJ Cant hit back by finishing off a Pirates move.

Cope continued to be on target from the tee whilst Arwel Robson missed both of Pirates’ conversions, meaning it was 17-10 to the hosts at the interval.

As with the opening period, there was a wait in the second for the first score and again it went the way of Jersey.

Pirates skipper Tom Duncan was sent to the naughty step leaving Scott Van Breda to cut through and double the lead for the hosts for a few minutes at least.

Wasps bound Dan Frost scored yet another try for the season to haul Pirates back with Robson this time converting, but Cope quickly sent through another penalty to push the Jersey advantage back into double figures.

That buffer was made to look comfortable when Jack Macfarlane went over at the back of another Reds maul to secure the bonus point with less than 10 to play.

Pirates had other ideas and gained a try bonus point of their own as they conjured up late efforts for Shae Tucker and Rhodri Davies, both converted by Will Cargill, to get them back within a point but that was how it stayed much to Jersey’s relief.

The final regular game of the season with crowds back in at Castle Park was an absolute thriller and followed the script of the final day.

The Knights hit the front early as Howard Packman raced over from the 22 and Sam Olver added the extras for a quickfire 7-0 lead, but they were in for anything but an easy day at the office.

Nottingham levelled the scores when David Williams touched down before some quick thinking from Knights scrum-half Gus Warr saw him dart over and help Doncaster to a 14-7 half-time lead.

That lasted a matter of minutes after the break as Jake Farnworth intercepted a stray pass to motor home from way out, a familiar sight if you’ve been following this season.

The Green and Whites then went in front on the hour mark with Williams running in his second try and Alex Dolly’s third conversion put them 21-14 ahead. An upset was now well and truly on the cards.

The hosts quickly dragged themselves back level as Will Holling crashed over at the back of a maul before Olver and Dolly traded penalties to make it 24-24 heading into the closing stages.

That still left time for the grandest of finishes as replacement Doncaster nine Sam Pocklington fought his way over for a last gasp winner and the bonus point try, much to the home crowd's delight.

A fantastic season for Doncaster and real signs of life from Nottingham who took a while to get going. What an ending.