Rassie Erasmus wary of Italy threat ahead of must-win game 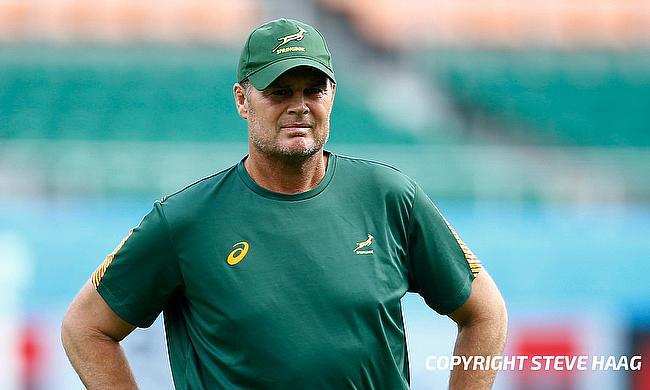 South Africa director of rugby Rassie Erasmus admitted that there is pressure on the Springboks as they line-up against Italy in a must-win World Cup game in Shizuoka on Friday.

Erasmus' side are currently at the third place in Pool B following their 23-13 defeat to New Zealand followed by 57-3 win over Namibia in the first two rounds and will be facing a confident Italy side, who are at the top of the table with two bonus point wins.

The two teams have faced each other 14 times since 1995 with Springboks winning 13 times but their only defeat against the Azzurri came in November 2016 in Firenze.

With New Zealand favourites to win against Namibia and Italy and are likely to seal the top place in the group the game between Italy and South Africa could very well be a knock-out game.

"We've been preparing for 20 or 21 Test matches and it is do or die now," Erasmus said.

"The players feel it. I can't sit here and tell you that we don't have a few butterflies, because we've lost to Italy in the last three years.

Meanwhile, Italy head coach Conor O'Shea stated that the pressure will be on South Africa as they bid to remain alive in the tournament.

"They are expected to win the World Cup," he said.

"If you don't front up physically against them, you've already lost the match. You must take them on in the forwards. We must treat it like the last match we'll ever play."