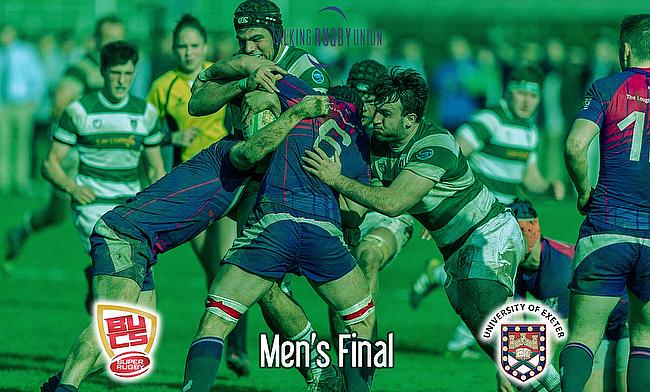 Ahead of the BUCS Championship Men's trophy final on Thursday at Twickenham, we will be profiling and previewing both Hartpury College and Exeter University as they prepare to battle for the biggest prize in University Rugby.

After looking at Hartpury College yesterday, our attention is now on their opposition – current BUCS Championship holders the University of Exeter.

Last March, James Doe’s late drop-goal clinched the BUCS Championship trophy for the University of Exeter and 12 months on, Keith Fleming and his side are back at the home of English rugby as they look to retain their title.

Exeter came into the inaugural BUCS Super Rugby season as the reigning champions, but with virtually a new squad from the one that secured the championship seven months earlier, the Green and Whites began this campaign with back to back losses against Loughborough and fellow finalists Hartpury College.

However since then, Exeter have looked pretty much unstoppable. They head into this final at Twickenham having lost just one of their last 14 matches and that sequence of results helped them finish second in the BUCS Super Rugby table. Their run of form secured them a home quarter-final against Cardiff Met and they easily dispatched the Welsh side 55-8 to reach the last four.

Their semi-final was a repeat of last year’s final as they took on Loughborough and Exeter found themselves on the right end of the result once again. Following a tight and tense first period, Exeter went through the gears in the second-half to secure a 51-28 victory and book their place in a successive Twickenham final.

So, Exeter are once again in a final and it is easy to see why. Sam Skinner has led his side professionally yet again this season while the top try scorer in BUCS Super Rugby, Tom Lawday, and the top points scorer, Edward Landray, have most certainly played their part. Added to their pool of talent are recent England Students internationals James McRae, Matt Elliet, Simon Linsell, Jo Snow and Tom Holdsworth so across the field they are a dangerous outfit.

Exeter and Hartpury have had some intense battles in recent years, but it is the current BUCS Championship holders which have had the better record winning seven of the last 12 meetings between the sides. The Green and Whites are in scintillating form at present and you wouldn’t put it past them to retain their crown.

Inside the Exeter camp

Director of Rugby Keith Fleming: “I think getting to the final is a measure of where we are and how far the boys have come.  We have worked really hard and to achieve back to back Twickenham finals is credit to them.

“I think coming into this first Super Rugby season, every side did not know what to expect. At the end of the day, all of us involved would say that BUCS and the RFU have done a brilliant job on it. I think the standard of rugby and the way the league has gone has been a huge success.

“To be honest, I think the boys would have maybe felt a bit of pressure coming into this new season as champions. I didn’t ban the chat of last year, but it was very much about this year. What has happened in the past is now over and it is what we do now in the lead up to the final.

“We had a tough first couple of weeks at the start of this season but we have been able to polish up on our preparation. We have learnt from that and moved on and now we are just focusing on Twickenham.

“I don’t think there is any advantage for those at all that went last year. We only have about three or four boys from 12 months ago and hopefully they can take the game in their stride. Hartpury are a great side and they have had a really good season so I expect it to be a really good contest where these players will demonstrate the high level which they are playing at.

“They [Hartpury] are very tough and physical with good ball players which highlights the threats they have right across the park. Both sides are going to have to focus for 80 minutes."