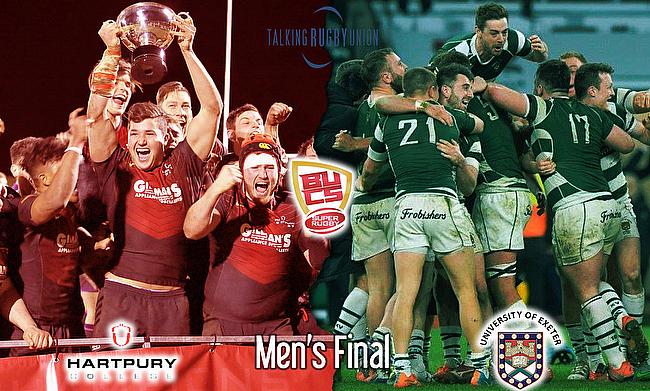 Hartpury College and Exeter have reached the BUCS Rugby Championship final after victories over Bath and Loughborough.

The BUCS Super Rugby Champions and BUCS Championship holders will clash at Twickenham on March 30th to see who is the best University side in the country.

In the Men’s Vase competition, Swansea will take on Nottingham after victories of the University of South Wales and Loughborough 2nds respectively with the final scheduled for next Wednesday.

Elsewhere across our featured BUCS leagues, seasons are slowly drawing to a close but there are still one or two things that are still yet to be decided.

Hartpury College reached the BUCS Championship final for the first time since 2014 after a hard-fought win over Bath.

A cagey first half ended with Bath carrying a three point advantage into the break after Sam Leeming’s try had originally put the hosts ahead.

Bath hit back with a score from Tom Kynge before a late penalty in the half via Will Flinn gave the visitors a 10-7 lead at the interval.

Adam McCarthy went over for Bath soon after the restart, but Hartpury produced the perfect response as scores from Maliq Holden and Jonas Mikalcius edged them in front.

Sean Lynn’s men dominated large periods of the second-half and when Bath lock Jack Davies was sin-binned; the home side capitalised on their pressure and were eventually awarded a Penalty Try.

Bath were tiring, but they weren’t about to roll over. Flinn landed his second penalty of the evening to reduce the deficit to just six points with eight minutes remaining.

From the restart, the visitors hammered the Hartpury line and despite a yellow-card shown to Tom Pashley, Bath couldn’t find a way through as College held out to book their place at Twickenham.

Hartpury Coach Sean Lynn: “We had to battle today. For 35 minutes we showed our true class, but we need to learn how to finish games off. We managed to do that tonight and well done to the boys for reaching Twickenham.

“I am delighted for the boys and we are looking forward to getting the triple now. We can’t wait. It will be a good final and a great advert for university rugby.”

Hartpury Captain Seb Negri: We don’t make it easy for ourselves!  But fair play again, we showed character. That will not be enough at Twickenham though. We need to step up, learn and move forward.

“It’s been an awesome journey and we have put in a shift this season. It has been a great year for Hartpury Rugby and the end goal is to win at Twickenham. Winning BUCS Super Rugby and National One means two boxes are already ticked and we want to win it at Twickenham.

Bath Head Coach Aaron James: “We wanted to believe and back ourselves and we did that but I’m gutted. We lost fighting tonight. I am very proud of the boys, but it wasn’t to be. Well done to Hartpury.”

“We keep coming back because we are a resilient side. If we are honest, we can’t give the chances away like we did tonight. The Super League has been brilliant and we have been able to match the big boys in this league. We need to dust ourselves down and go again next year.”

This semi-final was a re-run of last year’s final and by half-time, it looked as though it was going to be another tight affair with the scores level at 21-21.

James McRae and Tom Lawday crossed for Exeter while Yiannis Loizias, Luke Frost and Will Edwards went over for the visitors in a pulsating first period.

After the break, Exeter were clinical and took the game away from their opponents as Lawday and McRae both grabbed their second scores of the afternoon.

Loughborough were awarded a Penalty Try on the hour, but Lawday’s third and a score from close range sealed the victory for Exeter.

After victories of Durham 2nds and Leeds, USW and Swansea met in an all Welsh affair in the Vase semi-final while Nottingham hosted Loughborough 2nds.

In the first last four tie, it was Swansea who prevailed as they beat USW 23-15. Swansea finished seven points clear of USW in South A this term and they have now reached the Vase final for the first time since 2013. They will be up against North A side Nottingham after they eased past Loughborough 27-7 at Highfields.

The final between Swansea and Nottingham will take place next Wednesday. Kick-off is at 1100.

North B - There was one fixture in North B this week and it saw Manchester end a three game losing streak as they beat sixth placed Loughborough 3rds 29-24 in the Midlands. The win for the north-west side means they have ended the season in fifth place after securing five wins this term.

South B – Cardiff Met 2nds ended the season with eight victories to their name after a 38-24 win over bottom of the table Bristol 2nds. Cardiff Met completed the campaign in third place having lost just three of their 12 matches.

Northern 2A – Manchester Met will have to wait yet another week to find out if they have been crowned champions of Northern 2A as Liverpool beat Bangor 26-5 yesterday. The Merseyside club are eight points behind Man Met with two games left to play with their next fixture against Chester scheduled for Monday.

Elsewhere in Northern 2A, third placed Keele beat the aforementioned Chester 38-21 away from home with the Cheshire side still looking for their first victory of the season.

Northern 2B – Sheffield Hallam were crowned champions of Northern 2B last week and completed their season in style yesterday as they beat York 34-24 at home with the visitors having to settle for a third placed finish in this division.

Midlands 1A & 2A – Harper Adams v Beford as well as Warwick v Nottingham Trent 2nds were postponed in Midlands 1A. In Midlands 2A, Warwick 2nds and Harper Adams 2nds was also called off, but there was one fixture taking place. Midlands 2A champions Coventry beat second placed Nottingham 4ths 25-17 to end the campaign undefeated.