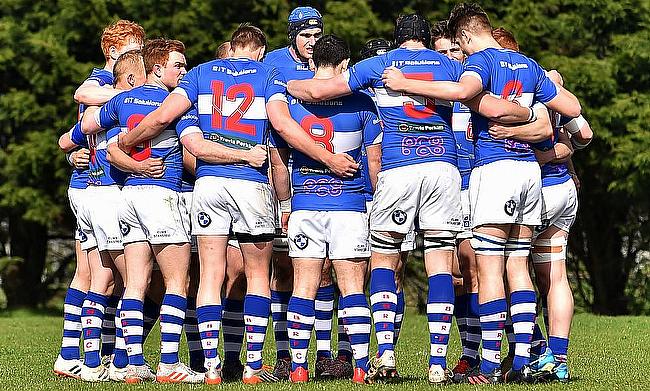 The buzz around the National League season will hopefully continue into Round Five as sides look to build on positive starts and ignite their campaigns.

Last weekend, the National League Rugby Review Show cameras were in Berkshire to witness Rams RFC secure a fourth successive bonus-point win. Seb Reynolds’ side produced a perfect run of results in September and top the charts heading into the second month of the campaign.

After their recent triumph over Leeds Tykes, Reynolds said there were still areas where the National One league leaders can improve, which is probably not what their opponents this weekend - Taunton Titans - want to hear given Rams’ pristine start.

In terms of the Titans, they were left to rue missed opportunities in Round Four as they lost 26-22 to Bishop’s Stortford and Tony Yapp’s men could easily have secured their third win of the campaign if their accuracy had been on point. Instead, the fifth-placed side now welcome the table-toppers to Veritas Park looking to respond after back-to-back defeats.

Rosslyn Park concluded the opening month of the season with four wins from four, so the second-placed side will be delighted with the start that they have made. Last Saturday, Kieran Power's men were dominant in the first-half against Darlington Mowden Park but could not claim a bonus-point in the North East, so there might have been a tinge of disappointment on their journey back down the M1.

https://t.co/pP0E321Rpp This week's try of the week is comes from National 1, where @rosslynpark show off their counter-attacking and outrageous offloading skills resulting in a try for scrum-half Jack Gash #Nat1 pic.twitter.com/mwu2UdSheo

However, now the dust has settled, the overriding feeling should be one of positivity within the Park camp and they will be seeking their fifth successive victory when they host Bishop’s Stortford this weekend. The visitors come into this fixture having returned to winning ways after edging past Taunton last time out and with just one defeat to their name thus far, a successful afternoon against Rosslyn Park would only add to Stortford’s solid start to the term.

National One’s featured game of the week comes from Paton Fields as Caldy and Darlington Mowden Park meet on the Wirral. The hosts head into this Saturday on a high after clinching their first victory of the season against Blackheath last weekend. Their dramatic win was the perfect response to their disappointing result against Birmingham Moseley in Round Three, so Gareth Davies will hope his side can build on their maiden triumph of the campaign.

Whilst Caldy were able to break their duck, Darlington Mowden Park are still trying to get off the mark. Their most recent defeat at the hands of Rosslyn Park was their fourth on the spin, but Garry Law’s side can take some positives from their second-half performance against one of the league’s high-flyers. After a tough September, can October provide better fortunes for the division’s bottom club?

Also across National One this weekend, an unbeaten Cinderford outfit will be looking to continue their excellent start to the campaign when they travel to Tonbridge Juddians whilst Birmingham Moseley (4th) visit Cambridge. Meanwhile, Chinnor meet Blackheath at Kingsey Road and Sale FC host Leeds Tykes in the North West.

The National League Rugby Review Show’s key game of Round Five sees two of National Two North’s title-chasers meet at Clifton Lane. On Saturday afternoon, Rotherham Titans host league leaders Fylde and the Lancashire outfit come into this match in a ruthless mood. Alex Loney and Chris Briers’ charges scored 179 points in September - including 80 against Harrogate last weekend - but this clash with Rotherham will undoubtedly be a test of their credentials.

As for the home side, the Titans (3rd) remain unbeaten after ending the month with a 49-17 win against Blaydon. They recovered from a slow start to notch seven tries and now they sit just two points behind Fylde heading into this weekend. Following their latest win, head coach Steve Salvin described his side as still being ‘fallible’ so he will be hoping Rotherham can show their Midas touch if they are to defeat the table toppers.

With this colossal clash at the summit taking centre stage this weekend, Sedgley Park (4th) will be keeping tabs on that fixture as they are also in the early title conversations. Scott Barrow’s side are unbeaten and with second-placed Stourbridge not in action in Round Five after their match with Loughborough Students was postponed due to Covid concerns, the Tigers could climb the National Two North ladder with another win.

Whilst Sedge have had the license to thrill this season, you could argue Bournville have been National Two North’s great entertainers thus far. The newly-promoted side, who visit Park Lane on Saturday, are the league’s top points scorers after thrashing Wharfedale 66-13 last time out. Following three wins from their opening four matches, Mitch McGahan’s men have had a dream start to their first-ever campaign at this level and they will be hoping the feel-good factor filters into October.

#Fylde make four changes in their starting line-up for the trip to @RotherhamRugby on Sat (14.00). Props Zach Barrow and Matt Ashcroft return whilst in the backrow Marcus Blake and Harlan Corrie start. @Natleague_rugby Review Show will feature the game, available on Sun evening. pic.twitter.com/y6M2k9tVdv

Come Saturday evening, there would have been a shake up in the National Two North standings because four of the top five all face one another this weekend, and sixth-placed Hull have also made a stirring start to the campaign. The Yorkshire outfit won all three of their home fixtures in September and they will be keen to translate that form on to the road when they visit Tynedale.

The hosts in Round Five got off to the perfect start against Stourbridge last time out, but they were quickly outclassed by one of the division’s early frontrunners. In truth, Ben Woods’ side have already played some of National Two North’s title candidates - after also coming up against Fylde and Hull Ionians last month - so Tyne will now be hoping for a more successful run of results as they look to spark their season into life.

Elsewhere in National Two North, Hull Ionians travel to Harrogate for an all-Yorkshire affair and Huddersfield host a Luctonians side who are searching for their first win of the campaign. Also in Round Five, Sheffield Tigers head to Chester and there will be no room for solace at The Avenue as Blaydon and Wharfedale target their maiden victories of the season.

Three wins and one narrow defeat means Worthing Raiders hold all the cards at the top of National Two South after four matches. The Sussex club bounced back from their loss against Canterbury to end last month on a high after they beat Old Albanian 22-13.

The leaders begin October by hosting newly-promoted Rochford Hundred and the visitors to Roundstone Lane will be in good spirits after securing their first win of the season last time out. Danny Cleare’s side stunned Canterbury to clinch a 20-19 victory and given they were well-beaten in their previous three matches, this was the perfect way to conclude September. Could they now upset the odds and kill the momentum of the table toppers in Round Five?

If you haven’t picked up on our weak James Bond puns by now, then we don’t blame you but if a script had been written to shape Clifton’s visit to Henley Hawks last week, the Lavender and Blacks certainly played a starring role. Matt Salter’s men were once again excellent but were denied a fourth win on the bounce by a late penalty on an emotional day at Dry Leas, so the Bristol-based side will be keen to hit back at the first time of asking.

In Round Five, they welcome Hinckley to Station Road and the Hornets'  National Two South mission hasn’t gone according to plan thus far. The Midlands club crashed to a third successive defeat last time out against Redruth and their brutal run of fixtures seemingly continue this weekend. Director of Rugby Scott Hamilton felt there were green shoots of recovery to take from their Round Four defeat, so he will be hoping his side can turn a corner on Saturday and earn their first win of the season.

In National League Rugby’s final featured game of the weekend, the aforementioned Redruth host Old Albanian with both sides looking to build on encouraging starts to the term. The Reds are the only unbeaten team in the division following three wins from three and whilst Nigel Hambly’s side do have a game in hand on those around them, they have only conceded 22 points so far.

As for OA’s, their winning feeling was halted last weekend as they went down to Worthing Raiders but they remain just three points off the top as the first signs of another competitive race for promotion begin to emerge in National Two South. Given James Osborn’s men have won two of their three matches away from Hertfordshire so far, can their solid start on the road continue in Cornwall?

Also in National Two South, Esher will be looking to return to winning ways when they take on Barnes whilst an in-form Guernsey Raiders are back on home soil for the first time after nearly 600 days as they face Leicester Lions. Elsewhere, Dings Crusaders go to Canterbury, Bury St Edmunds are up against Barnstaple and Henley Hawks travel to Westcliff.

For the best reaction to all the weekend's results, subscribe to The National League Rugby Review Show…