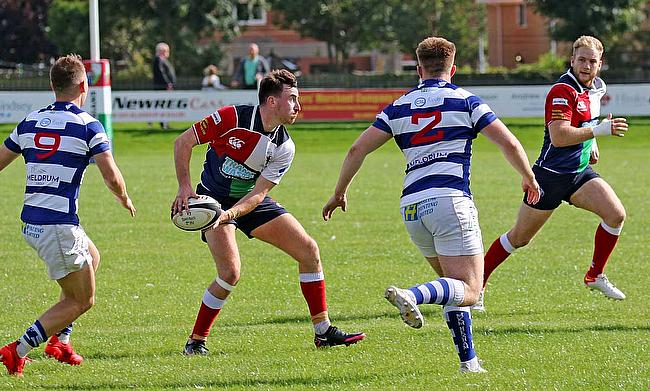 The big games continue in the National Leagues whilst a cluster of clubs will be hoping to get off the mark in Round Three.

Here’s what you can expect from the weekend’s action:

Taunton Titans might not have thought they would be competing in a top-two clash so soon after promotion from National One, but here we are. After away trips to Leeds Tykes and Darlington Mowden Park both yielded impressive victories, Tony Yapp’s side return to Veritas Park for their first home fixture of the season buzzing with confidence.

The Somerset club currently occupy second spot in the table, with Saturday’s opponents Rosslyn Park leading the way. Quite frankly, Kieran Power’s charges have been ruthless and irresistible in their opening two matches and their 60-10 thumping of Leeds Tykes last weekend certainly sent out a strong statement to the rest of the division. Yes, we are still only in September, but an early battle at the summit just adds to an already exciting start to the National One campaign.

Watching closely will be third-placed Rams, who continued their strong beginning to the season with a 24-13 victory against Tonbridge Juddians. Director of Rugby Seb Reynolds paid tribute to the performance of his forward pack last weekend as his side maintained their perfect start to the term.

Watch the best moments from Park’s Round 2 @Natleague_rugby #Nat1 win vs @LeedsTykes plus @Powersk33 thoughts ??

The Berkshire club produced an excellent first-half performance against TJs in Round Two and the same can be said for Plymouth Albion, who they face this weekend. However, the difference was Rams were able to see out the win whilst Albion saw a 19-3 lead slip through their fingers against Bishop’s Stortford. Damian Welch’s side are still searching for their first win and if Plymouth are to get off the mark on Saturday, a consistent 80 minutes might be the key ingredient.

We have already mentioned the three teams who have secured maximum points thus far in National One and Chinnor are the final club that could add themselves to that group in Round Three. Following their opening day win over Sale FC, the Black and Whites fulfilled their bye week last time out so they will be feeling refreshed when they welcome Cinderford to Kingsey Road on Saturday.

Whilst the visitors to Oxfordshire might not have two bonus-point wins to their name, successive victories very much represents a solid start to the season for Paul Morris’ men. Last weekend, an all-action game which saw three penalty tries and a total of five yellow cards concluded with Cinderford edging their way past Caldy (29-21). If the same level of drama is served up in Chinnor, our pick for National One’s Featured Game of the Week on The National League Rugby Review Show should be a cracker!

Also this weekend, Birmingham Moseley will be seeking their third win on the trot when they travel to the aforementioned Caldy whilst Bishop’s Stortford take their unbeaten start to the campaign to Leeds Tykes. Elsewhere, Sale FC will be aiming to build on their first victory of the season when they visit Tonbridge Juddians and Darlington Mowden Park go to Blackheath.

Hull Ionians sitting on top of the pile in National Two North has become an all too familiar sight when the club have found themselves at this level, and the Yorkshire outfit are sticking to the status quo in the early stages of this season. The I’s, led by the superb Lewis Minikin, dismantled Tynedale 50-14 in Round Two to continue their confident start to the campaign.

Their next port of call sees them travel to the Midlands to take on a Loughborough Students side who fell to their first defeat of the term last time out. Rhys Davies’ men lost to Fylde but were very much in the contest for an hour at Woodlands before the Lancashire club took the game away from them. However, there are certainly plus points for the Students to take into Round Three against the current league leaders.

It has been the perfect start to life in National Two North for @BvilleRFC as they made it two wins from two ??

Catch up on all the @Natleague_rugby action by subscribing to The National League Rugby Review Show ?? https://t.co/KlND4YCDY2 pic.twitter.com/b14YXHCS6x

Speaking of Fylde, they feature on The National League Rugby Review Show this weekend and Chris Briers and Alex Loney’s side have got off to a very commanding start to the season. Successive bonus-point wins and 77 points scored in their first two games is an eye-catching beginning to the campaign.

Tom Carleton’s superb try in last week’s win over Loughborough was the pick of the bunch and Fylde will be hoping one of their most dangerous threats is on song again when they visit Huddersfield on Saturday. The Yorkshire club bounced back from their opening day loss to Bournville by producing a strong second-half performance to see off Blaydon so Gareth Lewis’ side now have something to build on going into Round Three.

When Bournville and their supporters hop on the coach to Rotherham Titans this weekend, even the most optimistic member of the ‘Choco family’ might not have envisaged where their club currently find themselves. Mitch McGahan’s men head to Yorkshire on the back of two straight wins thanks to a storming second-half display against Harrogate last time out.

The next stop for the newly-promoted club is a trip to Clifton Lane to face a Rotherham side who were four tiers above Bournville in the English rugby pyramid a mere five years ago. The Titans battled back from 17-3 down to earn a draw against Sedgley Park in Round Two but reading the reports and listening to post-match interviews after the game, you get the sense Steve Salvin’s side can still improve despite a solid start to the term. Can they stretch their unbeaten run to a trio of matches on Saturday?

Elsewhere in National Two North, Stourbridge can also make it three wins on the bounce when they travel to Chester whilst an undefeated Sedgley Park face Wharfedale. Also this weekend, Hull and Sheffield Tigers meet in an all-Yorkshire affair, Blaydon visit Harrogate and Luctonians, who were absent from Round Two due to a Covid-19 outbreak within their squad, are back in action against Tynedale with both sides looking for their first points of the term.

After two rounds this season, Clifton have already shown they can mix up their approach in order to gain the desired result. The early National Two South league leaders brushed Barnstaple aside on the opening day before having to really front up to get past Leicester Lions last time out.

Matt Salter’s men are now aiming to add to their positive start when they host Barnes at Station Road. The visitors from the capital were unable to back up their Round One victory as they fell to a home defeat against a clinical Redruth side last weekend, so the London-based outfit will be hoping to find their cutting edge in Bristol as they aim to return to winning ways.

Esher Director of Rugby Peter Winterbottom feels there is still more to come from his side this season so if we are to believe what the former England international says, then the Eees could be serious title contenders. Last Saturday, the men from Molesey Road certainly had a swagger about them in the opening 40 against Dings Crusaders as they ran out 45-19 winners to secure another five-point haul.

Next up for one of the early pacesetters are Barnstaple who responded in the best way possible to their humbling opening day loss to Clifton. Barum hit back at Pottington Road to clinch a well-deserved 35-17 victory over Westcliff, which has kicked started their return to National Two South. Fellow newly-promoted side Rochford Hundred were beaten by Esher in Round One so the Chiefs will be keen to avoid the same fate on their trip to Surrey.

Make sure you catch all the action from Round 3 by subscribing to The National League Rugby Review Show ?? https://t.co/UnmXIYjmgO#Nat1 #Nat2 pic.twitter.com/vCHtTxI6zZ

And as if by magic, The National League Rugby Review Show has selected one of the standout fixtures of the weekend as Round Three’s Key Game. Worthing Raiders and Canterbury go head-to-head at The Marine Travel Ground on Saturday, but both sides are experiencing contrasting fortunes.

For the Raiders, they celebrated their centenary year by securing a second bonus-point win over Bury St Edmunds in a pulsating contest whilst Canterbury are still searching for their first points of the season following another narrow defeat, this time at the hands of Old Albanian. After coming down from National One, the City Men will want to get off the mark as swiftly as possible and National League Rugby’s cameras will be down in Kent to see whether they can achieve that feat.

The aforementioned Old Albanian will be hunting down their third victory of the season when they travel to the Midlands to face Hinckley whilst elsewhere in Round Three, Guernsey Raiders continue their return to National Two South against Dings Crusaders, Bury St Edmunds host Rochford Hundred and Westcliff take on Leicester Lions with both clubs eager to taste that winning feeling for the first time.

Henley Hawks’ clash with Redruth has been postponed following the tragic loss of David Hyde. The club have set up a GoFundMe page to help support his wife, Katherine and son, Tore. To find out how to donate, please click here.