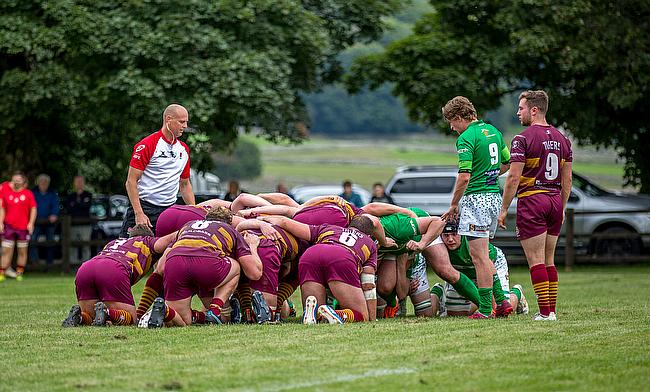 It might only be the end of September, but the National Leagues are delivering some superb rugby and Round Four should provide a cracking conclusion to the first month of the season.

Three wins and three impressive performances; it has been quite the start to the season for Rosslyn Park as National One’s early pacesetters have flown out of the blocks. Kieran Power’s charges have racked up 137 points in their opening three games as their ruthless streak continued against Taunton Titans last time out.

Park’s dominant first-half showing led to a 40-14 victory and they head to Darlington Mowden Park this weekend with confidence oozing through their veins. In contrast, the North East outfit are yet to taste that winning feeling after falling to their third successive loss last Saturday. A second-half fightback from Blackheath denied Garry Law’s side their opening victory of the campaign and things won’t get any easier for DMP in Round Four. Can they upset the odds and end the month on a high?

September’s coverage of The National League Rugby Review Show concludes by visiting Old Bath Road as Rams RFC welcome Leeds Tykes to Berkshire. Seb Reynolds’ side are currently going toe-to-toe with Rosslyn Park at the summit of National One following an eye-catching 26-19 victory away at Plymouth Albion in Round Three.

?? We finish September with these fixtures on The National League Rugby Review Show...

Subscribe to watch the show from 6pm (approx) on Sunday?? https://t.co/UnmXIYjmgO#Nat1 #Nat2 pic.twitter.com/O7m60K0eZ9

Rams’ latest triumph was their third bonus-point win on the spin, but they will be up against a Leeds Tykes outfit who will be keen to stop them in their tracks. Phil Davies’ men clinched their first victory of the campaign last time out as they came from behind to beat Bishop’s Stortford. Having ended one unbeaten record last Saturday, could they do the same this weekend?

Cinderford’s fans have certainly been treated to some edge-of-the-seat rugby throughout September and whilst their close scorelines might have put the Foresters faithful through the wringer, all they will care about is seeing their side with three wins from three next to their name. Last time out, Paul Morris’ men left it late to clinch a dramatic victory over Chinnor and they will be seeking a fourth triumph on the bounce when they host Cambridge on Saturday.

Richie Williams’ side were not in league action last weekend, but they did manage to squeeze in a friendly fixture against the University of Nottingham as the Blood and Sand got some extra minutes under their belt. They now turn their attention back to National One as they search for their first win of the season, and given how they performed in defeat against high-flying Rams RFC on the opening day, that could be a source of encouragement for Cambridge.

Birmingham Moseley will also have their sights set on maintaining their winning start to the season as Adam Balding’s side host Chinnor in a very intriguing match-up at Billesley Common. Elsewhere in Round Four, Taunton Titans travel to Bishop’s Stortford, with both sides looking to hit back from defeats, whilst Blackheath take on Caldy and Sale FC face Plymouth Albion.

It might not have been the prettiest of victories, but Fylde’s recent success against Huddersfield was a win full of grit and determination. In the build up to their Round Four clash with Harrogate, Alex Loney and Chris Briers may well have focused on areas of improvement, but the fact of the matter is the Lancashire outfit sit top of the pile following three consecutive wins.

They end September by hosting a Harrogate side who clinched their opening victory of the campaign last weekend - their first triumph at this level for four years. Their narrow win against Blaydon now gives David Doherty’s side a platform to kick on, but heading to Woodlands will arguably be their toughest test of the season.

Stourbridge have shown their powers of recovery in all three of their National Two North matches thus far, and on each occasion, Neil Mitchell’s men have found a way to win. On Saturday, the Midlands outfit will probably want a stress-free afternoon to provide some respite from their recent nail-biting finishes but the drama they have served up has produced successive wins up to this point.

#Fylde welcome @Harrogate_Rugby to the Woodlands on Sat (ko 15.00). Match preview at: https://t.co/vUYSgmhjcJ

Let's hope for a big crowd to encourage the joint N2N leaders.

The last meeting of the two clubs was in Jan 2011. Here's a brief memory of that day. pic.twitter.com/csCWv7J666

Next on their agenda is the visit of Tynedale and whilst Stour currently occupy second place in the table, their opposition in Round Four were able to get their season up and running last time out.  The North East outfit fought hard to clinch a deserved victory over Luctonians, so can they now build on that triumph to secure back-to-back wins?

National Two North’s Featured Game of the Week comes from Dore Moor as Sheffield Tigers welcome the unbeaten Sedgley Park to Yorkshire. In Round Three, Sedge produced a sublime final 20 minutes to turn the game in their favour against Wharfedale and Scott Barrow’s men are still very much in touch with the early pacesetters in this division.

That 43-26 victory leaves them third in the table, whereas Sheffield Tigers sit in the bottom half following one win from their first three matches. Jamie Broadley’s charges lost 29-0 to Hull last week, but they are back on home soil as they look to enter October in a positive fashion.

Elsewhere in National Two North, Rotherham Titans take their unbeaten start to Blaydon while Hull Ionians will be keen to return to winning ways when they host Huddersfield. Meanwhile, Hull face Chester, Bournville continue their eye-catching beginning to the term against Wharfedale and Loughborough travel to Luctonians, who will be turning Mortimer Park blue on Saturday as they raise money for Prostate Cancer UK.

National Two South leaders Clifton take on Henley Hawks in Round Four and it is set to be a poignant afternoon at Dry Leas. This will be the Hawks’ first match since the tragic passing of David Hyde and both sides will partake in a minute’s applause before the game in memory of the second-row.

With two top teams in the division facing off this weekend, this fixture should be a fitting tribute to David especially given how Clifton have begun the campaign. The Lavender and Blacks have secured three straight victories and they are the highest points scorers across the National Leagues, so Henley will be hoping to channel the emotion of Saturday into a winning performance as they seek to become the first side to halt Matt Salter’s men.

Second-placed Esher produced another dominant display against Barnstaple to secure their third bonus-point victory of the campaign as Peter Winterbottom's side continued their fabulous start. National Two South Player of the Week, Harvey Scott, scored four of the Eees' 10 tries and their ruthlessness could well be on show once again when they head to Midlands this weekend.

Esher travel to Leicester Lions who were also in an unforgiving mood in Round Three. They racked up a half-century of points against Westcliff to spark their season into life and head coach Gareth Collins hopes their first victory of the campaign can be a catalyst for them this term. However, they will have to be firing on all cylinders if the Lions are to end the visitors’ perfect start.

The National League Rugby Review Show’s final featured game of the weekend comes from Devon as two newly-promoted sides clash at Pottington Road. Barnstaple take on Guernsey Raiders in Round Four and the hosts will be keen to dust themselves down and go again after another tough away day last time out.

Their 64-22 loss to Esher would have stung, but Barum know that fixtures against some of the title contenders might not be where they find success this season. Perhaps games like Saturday’s meeting with Guernsey is what the Chiefs might be targeting, but the Raiders will have something to say about that after back-to-back wins. A remarkable revival against Dings Crusaders leaves Jordan Reynolds’ men in an excellent position as September draws to a close, so can they make it three victories on the spin?

Also across National Two South this weekend, it is third against fourth as an in-form Old Albanian host Worthing Raiders whilst Redruth return to action by visiting Hinckley. Elsewhere, Bury St Edmunds go to Dings Crusaders, Canterbury travel to Rochford Hundred and Barnes and Westcliff meet in the capital.

Subscribe to The National League Rugby Review Show for all the reaction and news from our divisions...