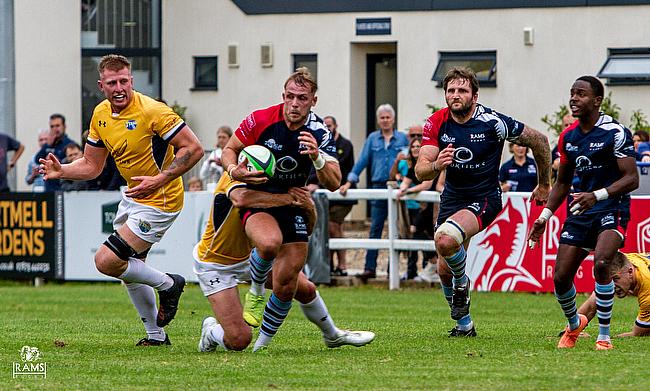 Unbeaten starts the flavour of the weekend across the National Leagues
Park looking ominous, Fylde go top and Clifton dominate once again
Taunton test at the top, I’s aim for three on the spin and exciting Worthing head to Canterbury
Rams maintain perfect start, Bournville come back and Barnstaple shake off heavy loss

As the curtain came down on the first month of the National League season, the eye-catching and thrilling rugby continued.

Rams RFC have moved to the top of National One after securing a comfortable 29-11 win against Leeds Tykes at Old Bath Road.

In front of the National League Rugby cameras, Seb Reynolds’ men led 17-3 at half-time thanks to tries from Tom Vooght, Henry Bird and Oliver Taylor.

A second Charlie Venables penalty doubled Leeds Tykes’ tally after the break, but another score from Vooght was followed by an Oli Cole try to wrap up the win for the Rams.

Tykes scrum-half Connor Lloyd did cap off a solid afternoon for himself with a try three minutes from time, but the Rams concluded the first month of the season with a 100 per cent record.

Rosslyn Park continued their winning start to the campaign as they beat Darlington Mowden Park 28-17 to secure their fourth victory on the spin.

Arthur Ellis, Jared Saunders and Jack Gash all crossed in the first half to give Kieran Power’s side a 25-7 lead at the interval.

Owen Waters then extended Park’s advantage from the tee, but DMP sparked into life to make the scoreline a lot more respectable as Brandon Asher-Wood and Ben Frankland touched down.

However, the hosts were left empty-handed from this contest as Park departed the North East with another win under their belt.

Cinderford’s Michael Austin scored two tries as the Foresters fended off a resurgent Cambridge to seal a 41-26 victory at Dockham Road.

Austin’s tries at the beginning of each half had helped the home side into a 31-7 lead, but the visitors did bring themselves back into the contest.

After dotting down in the first period, the excellent Ben Brownlie and Kieran Frost scored in a five-minute window to reduce the deficit to 12 points.

However, Cinderford regained their composure and tries from Jack Preece and Tim Andrew, to add to first-half efforts from George Boulton and Will Baldwin, was enough for the hosts to clinch a fourth straight triumph.

As for the away side, Brownlie was able to complete his hat-trick as the Blood and Sand left Gloucestershire with a try-bonus point.

Whilst Cambridge are still searching for their first win of the season, the same can’t be said for Caldy who got their campaign up and running with an 18-16 victory over Blackheath; Martin Gerrard’s score two minutes from time snatching the win for the Cheshire outfit.

Elsewhere in National One, fly-half Caolan Ryan notched 17 of Chinnor’s 29 points as the Black and Whites defeated Birmingham Moseley 29-22 at Billesley Common whilst Bishop’s Stortford returned to winning ways as they edged past Taunton Titans with a 26-22 victory.

Meanwhile, Plymouth Albion currently prop up the table after falling to a fourth successive loss as they were beaten 38-27 by Sale FC in a pulsating game at Heywood Road.

National Two North league leaders Fylde maintained their blistering start to the campaign as they thumped Harrogate 80-26 at Woodlands.

The Lancashire outfit recorded their fourth win on the trot in some style, running in 12 tries on Saturday afternoon.

Tane Bentley scored a hat-trick for the home side whilst there were braces from Tom Grimes and Henry Hadfield.

Harrogate did leave the North West with a bonus point despite the heavy scoreline as Matt Landsall, Sam Brady, Sam Parry and Fraser Kitching all crossed for the Yorkshire outfit.

Stourbridge continued to keep pace with Fylde following their 30-5 victory over Tynedale in the Midlands.

Tyne got off to the perfect start with Tom Bramwell capitalising on a Stour yellow card to score early on, but they failed to add to their points total for the rest of the afternoon.

The hosts responded as Afeafe Haisila and Archie Tarbuck both scored to give their side a 10-5 lead before Michael Heaney added three more points from the tee,

After the interval, Stour kept their foot on the gas with Dan Rundle, Arthur Morgan, and Nick Murphy adding second-half scores to wrap up the win.

In one of The National League Rugby Review Show’s featured games, Sedgley Park once again showed their cutting edge to clinch a 32-16 win over Sheffield Tigers at Dore Moor.

Emmanuel Effiom and Rhys Henderson were able to swing the contest in Sedge’s favour in the second half with their respective scores whilst Steve Collins pinged over 10 points to seal the win for the away side.

Sheffield Tigers had led 16-12 at the break after Jamie Broadley’s slick score and 11 points from the boot of Mark Ireland, but Sedge were able to build on tries from Tom Ailes and Sam Lowthion to continue their unbeaten start to the term.

Rotherham Titans are also yet to taste defeat as they recovered from 17-0 down against Blaydon to score seven tries and secure a 49-17 victory in the North East.

Elsewhere in Round Four, Bournville continued their sensational start to life at this level with a 66-13 win over Wharfedale - winger Ollie Dawkins grabbing a hat-trick - whilst Hull made it three home victories in a row as they defeated Chester 31-10 at Chanterlands Avenue.

Worthing Raiders are the new leaders of National Two South as they inflicted a first defeat of the season on Old Albanian.

The Raiders came away from The Woollams with a 22-13 win but did find themselves trailing at the break.

Nico Defeo’s try and the accurate kicking of Dan Watt gave OA’s a 13-10 lead, with Matt McLean and Connor Slevin going over for the visitors.

However, the hosts couldn’t add to the scoreboard after the interval as Will Hobson and Jack Lake dotted down to secure a bonus-point success for Worthing.

If a script was written for Henley Hawks’ clash with Clifton on Saturday, the events at Dry Leas would have fitted the bill perfectly as James Love’s last-gasp penalty sealed a dramatic 28-27 win on an emotional day for the home side.

The Hawks were playing their first match since the tragic loss of second-row David Hyde and ahead of kick-off, Clifton retired their number five shirt for the game and signed the jersey before presenting it to Henley.

There was also a minute’s applause in memory of David and what unfolded on the pitch was a fitting tribute.

Thanks to tries from Sam Lunnon and Reuben Norville, the Hawks had surged into a 17-3 lead, but Clifton roared back either side of half-time.

The view from behind the sticks as James Love slots this beaut of a 40yrd pen to seal a highly emotional 28-27 win. #ForDH5 pic.twitter.com/tHvTqkFqXT

Niall Gibbons, Luke Cozens and Joe Owen all went over to swing the game in the visitors’ favour, but Love’s second penalty of the afternoon reduced the deficit to 27-20.

Another score from Norville on 63 minutes cut the lead to just two points, but Love’s superb late penalty was the final act of a highly entertaining contest in Oxfordshire.

Esher’s winning start to the season came to an end in the Midlands as Leicester Lions secured an excellent 27-21 victory in Round Four.

Despite flying out of the blocks at the beginning of this campaign, the Eees were never in front in this contest as a brace from Alex Wilcockson made sure the Lions bossed the scoreboard in the first half.

After Joseph Vajner had dotted down for Esher, the aforementioned Wilcockson completed his hat-trick on 51 minutes.

The visitors then brought themselves right back into the game during a 10-minute spell as Dan Rowland’s effort and a penalty from Sam Morley made it a two-point game.

However, Oliver Taylor’s try for the Lions proved to be enough to seal the win whilst another Morley penalty earned Esher a losing bonus point.

Elsewhere, TRU would like to send their best wishes to Dings Crusaders prop Liam Appleton who suffered a serious leg injury in the club’s 33-27 win over Bury St Edmunds.

The game took three-and-a-half hours to complete after the Crusaders forward was injured on 18 minutes, but when the fixture resumed two hours later, his side were able to secure their second victory of the campaign.

Guernsey Raiders ended a very positive first month back in National Two South with a 27-17 win against fellow newly-promoted side Barnstaple, whilst Redruth battered Hinckley 41-7 on their return to action.

Also in Round Four, Edward Berridge scored twice to help Barnes to a 46-12 victory against Westcliff and Rochford Hundred secured their maiden triumph in this division following a 20-19 win over Canterbury.

Subscribe to The National League Rugby Review Show for all the reaction and news from our divisions...