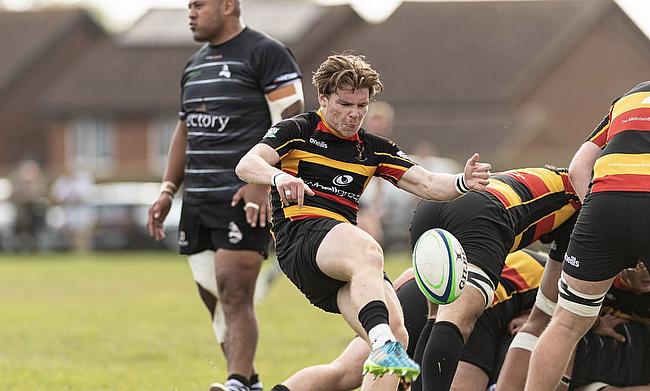 Taunton test at the top, I’s aim for three on the spin and exciting Worthing head to Canterbury
Rams maintain perfect start, Bournville come back and Barnstaple shake off heavy loss
Park aiming to send out another statement, Sedge & Rotherham clash and Clifton look to build

The National Leagues delivered another scintillating weekend of action in Round Three as the divisions begin to take shape.

Rosslyn Park ran in six tries as National One’s leaders beat Taunton Titans 40-14 to maintain their 100 per cent start to the season.

Park stormed ahead when Nick Scott touched down after just seven minutes before the visitors capitalised on a Taunton yellow card to score on two more occasions through Henry Robinson and Ben Howard.

Jared Saunders extended their lead on the stroke of half-time before Lewis Jones’ converted try on 42 minutes made it 35-0 to Park.

Charlie Wright gave Taunton some respite with his score, but it was short-lived as Will Foster added his name to the scoresheet as the visitors continued to be ruthless.

Isaac Dalton’s try four minutes from the end was merely a consolation for the Titans as their dream start to life in National One came to a halt.

Keeping pace with Rosslyn Park are Rams RFC, who claimed their third bonus-point win on the spin with a 26-19 victory away at Plymouth Albion.

Rams began the second period on the front foot as Connor Stapley dotted down and despite Frankie Nowell - the brother of England star Jack - setting up a grandstand finish with his try eight minutes from time, the visitors held on to continue their perfect start to the campaign.

Just going to leave this here...

Top of the table.

Thank you to all our travelling support down to Taunton today.

In the National League Rugby Review Show’s featured game of the week, Cinderford beat Chinnor in an entertaining match at Kingsey Road to secure their third win on the bounce.

Clive Stuart-Smith’s late score underneath the posts sealed the victory for Paul Morris’ side in a close contest in Oxfordshire.

James Bourton scored all 13 of Chinnor’s first-half points, but the Black and Whites were trailing at the break following a George Porter score and a penalty try for Cinderford.

Will Ryan and Stuart-Smith exchanged tries before the hour and another Bourton penalty edged Chinnor in front.

Unconverted tries from Mike Austin (Cinderford) and Nick Smith (Chinnor) kept the hosts ahead, but Stuart-Smith’s second with the clock in the red snatched the victory for the visitors.

Birmingham Moseley remain the only other unbeaten side in National One as they dispatched Caldy 24-0 at Paton Field.

Elsewhere, Leeds Tykes finally got their campaign up and running as they ended Bishop’s Stortford’s unbeaten start in Yorkshire. Phil Davies’ side secured a 33-25 win in a very watchable National One encounter whilst Blackheath also kick-started their season with a 23-14 triumph over Darlington Mowden Park.

Fylde’s strong start to the National Two North season continued in Round Three as a solid first-half display helped them to a 22-15 win away at Huddersfield.

Alex Loney and Chris Briers’ side are now only one of two teams to have won all three of their matches this term.

The Lancashire outfit were in a decent position at the break thanks to Tom Grimes’ brace and a score from Phil Mills.

Liam Stapley’s effort and five points from the boot of Will Milner kept Huddersfield in touch, but the first points of the second period came on 67 minutes as Greg Smith pinged over a penalty.

Jonathan Mason’s score one minute from time meant Gareth Lewis’ side did claim a losing bonus-point at Lockwood Park, but once again, it was another triumph for Fylde.

Stourbridge produced a storming second-half display to clinch their third straight win of the season as they beat Chester 36-27 at Hare Lane.

The visitors were behind at the break as tries from Scott Robson and Harrison Vare, plus 10 points from the boot of Liam Reeve, gave the hosts a 20-19 lead.

Stour had actually scored three tries of their own in the opening period through Jack Lea, Stefan Thorp and Dan Rundle and it was the Midlands side who were on the board first in the second half.

FINAL SCORE UPDATE - FIRST XV
It was a tough day at the office for our First XV against a well drilled and driven Stourbridge side.

Jordan Carey darted over before Matt Moseley crossed the whitewash to put the away side in a comfortable position.

Mike Heaney’s penalty increased Stour’s advantage and despite another score for Vare on 78 minutes, Neil Mitchell’s charges saw out another impressive victory.

Two tries from both Rhys Henderson and Matt Gallagher helped Sedgley Park maintain their unbeaten start with a 43-26 win over Wharfedale.

After Elliot Stockton had notched an opener for Dale, tries from Tom Ailes and Henderson gave Sedge a 12-7 lead at the break.

No.8 Josh Burridge and Gallagher swapped tries shortly after the interval, but the hosts found themselves in the ascendency when Rian Hamilton dotted down twice in quick succession to put Dale 26-19 up.

However, Sedge regathered themselves and produced a pristine final quarter as Gallagher and Henderson were joined by Andy Riley and Kian Stewart on the scoresheet to seal the win.

The three fixtures we have highlighted are just a small snippet of the excellent action we saw in National Two North this weekend.

Richard Hayes’ dramatic late penalty saw Rotherham Titans clinch a 48-46 win over newly-promoted Bournville in a thrilling contest at Clifton Lane. Loughborough Students also snatched victory from the jaws of defeat as Jack Rowntree raced over the try-line to seal a 29-24 win over the previously unbeaten Hull Ionians.

Elsewhere, Hull’s solid start to the term continued with a 29-0 triumph against Sheffield Tigers and both Harrogate and Tynedale recorded their first victories of the season by beating Blaydon (17-12) and Luctonians (18-10), respectively.

Fin Sharp scored a hat-trick as Clifton’s rampant start to the National Two South season continued as they comfortably saw off Barnes at Station Road with a 57-10 victory.

The Lavender and Blacks flew out of the blocks by scoring three tries in the opening 10 minutes, with Sharp’s first sandwiched in between a brace from hooker Regan Herbert.

A Josh Hammett penalty and a try from Ryan Seabright saw Barnes come back into the contest, but that was as good as it got for the away side.

Further scores from Bradley Talbot, Sharp and Luke Cozens saw Clifton lead 40-10 at the break, and Matt Salter’s side continued with a swagger after half-time.

Alex Kilbane and Harry Bate touched down before Sharp fittingly put the icing on the cake with his hat-trick to maintain a flying start to the season for the Bristol club.

Esher were also in a relentless mood in Round Three as they crushed Barnstaple 64-22 at Molesey Road to keep their 100 per cent start to the season intact.

Peter Winterbottom's side are the early pacesetters alongside Clifton and once again, they showed their possible title credentials on Saturday afternoon.

No.8 Harvey Scott scored four of Esher’s 10 tries, as the home side completely dominated the contest from start to finish.

Barnstaple scored tries through Flynn Elworthy (2) and George Snell, but this was another chastening afternoon on the road for the newly-promoted side.

In the National League Rugby Review Show’s key game of the weekend, Canterbury were able to clinch their first victory of the campaign as they beat Worthing Raiders 29-24 in an enthralling match at The Marine Travel Ground.

Sam Sterling opened the scoring with a converted score for Canterbury, but the away side hit back through Nathan Jibulu.

Alex Evans and Jerome Rudder exchanged tries before the break, but Sterling’s second meant the City Men held a nine-point advantage at half-time.

Henry Birch dotted down on 49 minutes to give the Raiders the ideal start to the second period, however a Tom Best score and a Frank Reynolds penalty kept Canterbury in the ascendency.

Cameron Dobinson’s try two minutes from time for Worthing set up a nail-biting finish in Kent, but Matt Corker’s men held on for their first win of the season.

With Worthing’s unbeaten start ended by Canterbury, Old Albanian are the only other side with three victories to their name in National Two South as they battled to a hard-fought 32-26 win away at Hinckley.

Guernsey Raiders built on their opening triumph over Rochford Hundred by coming from behind to beat Dings Crusaders 34-31 in a thriller at Shaftesbury Park.

Elsewhere, Bury St Edmunds were back to winning ways with a 29-3 victory against the aforementioned Rochford Hundred and Leicester Lions got their season up and running by battering Westcliff 50-14 at The Gables.