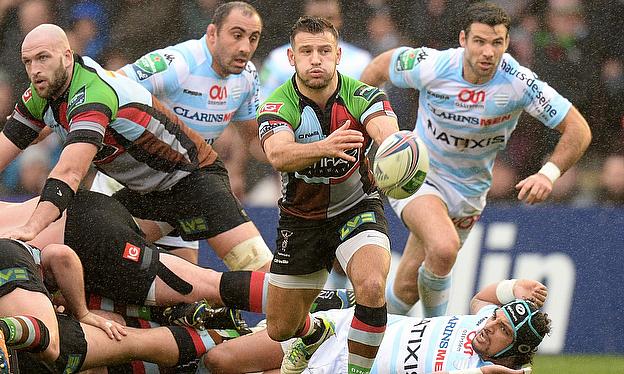 Harlequins continued to snap at the heels of Clermont Auvergne as they kept alive their hopes of reaching the Heineken Cup quarter-finals by grinding Racing Metro into submission.

Twickenham Stoop hosted a poor spectacle and Quins will be disappointed to have finished a match they dominated without going close to posting a try-scoring bonus point as the game ended 17-3.

But a second win in Pool Four leaves them only four points below leaders Clermont with the French giants having to visit London in January.

Nick Evans, instrumental to last weekend's 32-8 victory in Nantes, was equally influential in the home leg of the double-header as Quins established a 14-0 half-time lead.

The 33-year-old kicked three penalties and laid the groundwork for Racing's defeat until a shoulder injury forced his exit at half-time.

Wing Charlie Walker crossed just seconds before the break, but that was the only time Racing's whitewash was breached with Quins guilty at times of trying to play too much rugby in wet conditions.

Racing fielded four British and Irish Lions in Jamie Roberts, Jonathan Sexton, Mike Phillips and Dan Lydiate, each of whom played in the summer's triumphant Test series against Australia.

The presence of the Celtic quartet failed to inspire an expensively assembled team that lacked cohesion, but Wales will at least have been pleased by Roberts' return after three months out following ankle surgery.

Quins began the return leg of the double-header where they had left off at the Stade de la Beaujoire by taking command against the Top 14 club with Evans prominent.

Evans slotted three penalties, missed a fourth and touched down only for the television match official to have spotted an earlier knock-on from full-back Mike Brown.

The slippery former All Black almost wriggled over again in the 23rd minute but was felled by a try-saving tackle from second row Karim Ghezal.

When Racing staged their best attack of the first half, initiated by Sexton and continued by Roberts, pressure from Luke Wallace forced a penalty.

Wallace was a handful at the breakdown with two previous poaches hampering the Parisians' chance of making any impression on the scoreboard.

The only thing missing from Quins' otherwise dominant first half was a try, but that eventually arrived in injury time with Tim Molenaar punching the initial hole in the defence.

Poor defending from Roberts allowed the attack to continue and man of the match Walker hit the line at pace to dash over, with Ghezal falling off the tackle on this occasion.

Evans had departed at the interval, so substitute Ben Botica took over the kicking duties and was on target with his first penalty.

Finally Racing were off the mark as Sexton landed three points, but a poor match continued to deteriorate in the second half as Quins struggled to unlock their opponents' defence.

The Top 14 club were at least making a fight of it and finished with a flourish, but Quins had cantered out of sight long ago.