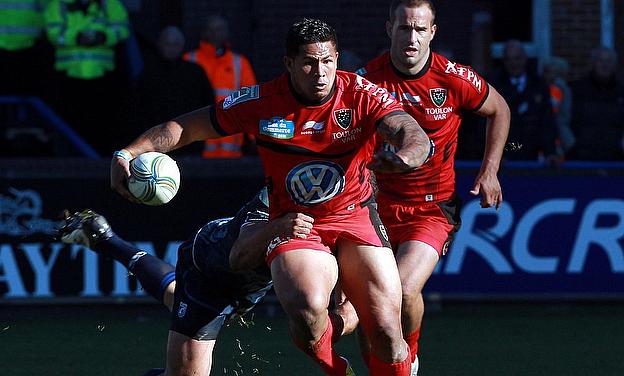 Dave Smith went over for a pair of tries
©Press Association

Heineken Cup champions Toulon regained their place at the top of Pool Two as two tries from wing Dave Smith set them on their way to a bonus point win over Exeter Chiefs.

The Chiefs had got close to capturing their biggest ever scalp in the first of the back-to-back pool matches at Sandy Park last weekend, eventually going down 14-9, and they battled long and hard to stay in the fight in the south of France.

But at a ground where Toulon had won 41 of their last 42 games and had never been beaten before in the Heineken Cup, the visitors were still within sight at half-time.

The Chiefs stayed within five points of the champions until two tries in the space of five minutes changed things.

Toulon started strongly and Smith crossed for the first of his two tries in the 12th minute, converting an overlap on the left for an effort which went unconverted.

However, the Chiefs showed they were again in no mood to be overawed as they stole a home line-out and turned it into a try.

They spread the ball wide to Tom James on the left and he cut inside past opposite number Alexis Palisson. The Wales wing then found back row man Don Armand on his inside, who weaved his way past Seb Tillous-Borde to cross for a try at the posts, which Henry Slade converted to give the Chiefs the lead.

To add insult to injury, Palisson followed Chris Masoe to the sideline with a game-ending injury before the end of a bruising first quarter.

Matt Giteau's boot was off target in the early stages, but shortly after missing with a second shot he cut the Chiefs' defence to shreds as he set up a second score for Smith.

While most of the Chiefs fans thought the pass was forward for the try, the TMO gave Irish referee John Lacey the authority to award the score.

Giteau added the conversion and then stretched the home lead with a penalty - but the visitors hit back on the stroke of half-time with a Slade penalty to cut the gap to five points at the break.

A second Giteau penalty gave the champions the perfect start to the second half and had Delon Armitage not lost the ball as he drove over the line the lead would have been further extended - h owever, the England flanker fluffed his lines as he went over the line.

Slade knocked over a penalty at the other end after Exeter recovered their poise and moving into the final quarter there were once again only five points between the two teams.

Then came the Toulon onslaught which secured the victory and also earned them the bonus point they needed to open up a two-point gap over Cardiff Blues at the top of the pool.

Replacement prop Xavier Chiocci barreled his way over for a try that owed everything to Drew Mitchell's inside raid off the right hand of recent replacement Jonny Wilkinson.

Giteau added the extras and then converted the bonus point try scored by Wilkinson at the foot of the right hand upright. That score took the champions 19 points clear and made victory safe.

However, the Chiefs did not give up and a brilliant run by Luke Arscott almost ended in a try - Mitchell's arm just preventing him from getting the ball down.

But Exeter held onto their position and worked Aussie flanker Ben White over for a try which Slade converted to give them a boost at the end.

Qualification for the knockout stages now looks beyond the Chiefs, who are third place in the pool - e ight points behind Toulon and six behind the Blues.