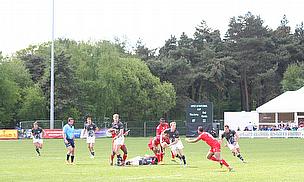 The Reds extended their winning run to 6 games in 6 taking them to the top of the Super 15's league. Meanwhile the Bulls were unable to turn around their current misfortunes, although put up a valiant fight in what was a fast and entertaining clash in Brisbane.

Both teams started off testing one and others backlines and both were guilty for giving away early penalties at the start of the game, in what was a relatively damp Suncorp stadium. Morne Steyn slotted over a beautiful penalty kick 4 minutes in to take the Bulls up by 3 points to nil after the Reds were caught offside in the midfield.

The Reds did not hesitate to search for a reply and after 2 minutes of prolonged pressure by the Reds forwards on the blues 5 meters Rob Davies provided a decoy run for Quade Cooper, who contributed with a neat dummy back inside to run between a despairing Matifield And Bakkies Botha and place the ball coolly between the posts, also adding the two points himself with an easy conversion. An excellent reply by the Reds who were now up 7 points to 3.

Too many mistakes early on for the Bulls hindered and limited their first half chances.

The Reds were looking to run the ball when possible, and the game began to open up during the middle stages of the first half. The Bulls began to find themselves on the front foot with strong running by Wynand Oliver. However, a turnover resulted in Cooper flicking the ball back inside behind his back on his own 5 meter, as he continues to dazzle the viewers with his flair.

When the ball came loose 25 minutes in Luke Morahan placed a kick behind the Bulls defensive line and the ball bounced kindly into his arms, he looked clear but determined Basson tracked back well to make the tackle on the Reds fullback.

Steyn replied straight away from a penalty around 41 meters out. 7-6 to the Reds.

The Reds were mixing it up well bumping it up through the forwards and the presence of Robinson in midfield was proving hard for the bulls to deal with often getting sucked in at the ruck area and leaving gaps for clinical backline of the Reds. Cooper added to his scoring with a neat drop goal from just outside the 22 on the 35 minute mark.

Quaig Cooper made a break to the Bulls 10 in some neat stepping to avoid 3 tackles passing back inside to Ioane when Genia spread it wide, Faingaa took a quality catch on his knees and offloads in one hand to Radike Samo who steps inside and backs his pace to take it under the posts after 39 minutes had been played.

The bulls capitalise on some lack set piece defence by the Reds, and the restart saw Basson catch Steyn's restart and run in unchallenged under the posts 30 seconds before half time. The Reds were up 17 points to 13 at halftime.

A scrummage to the Reds 10 metres in from touch was spread wide to Luke Morahan, who at only 21 years of age, dummies the pass and finds a gap and dives over in the corner. Cooper misses the conversion, 22 “ 13 to the Reds 45 minutes played.

Steyn makes the most of the penalty that was given away by the Reds for holding on as he slots over a penalty 45 meters out. 22-16 to the Reds 50 minutes gone.

Kirchner took a risk by running it back across his own try line on 55 minutes and attempted to evade Ben Lucas but the fresh legs tracked him down and Kirchsner was brought down resulting in a 5 meter scrum. You don't see many tries from set pieces these days but the Reds have clearly been practising them in training, another well worked back move saw Morahan cross over for his second. 27-16 to the Reds.

The Bulls looked reply straight from the restart but replacement lock Wallace-Harrison intercepted and kicked away, Digby Ioane chased and had the legs to nudge it on and collecting nicely to dive over to score a 60+ meter counterattacking try for the Reds. The celebration is equally as impressive as the try and Iowane does some sort of party trick which surely will be on Plays of the Week! 65 minutes 32-16 to the Reds.

The Bulls, as they had been doing all night, replied straight away with some quick ball and strong running by the forwards and found themselves on the Reds 5 meter mark. A short ball from scrumhalf Hougaard to Danie Roussow, the replacement second row, powered over to just the right of the posts. There was no stopping him, from that distance and Steyn converted. 32 -23 to the Reds 67 minutes played.

The Reds looked to be patient for the first time of the night, and took it up through the forward. In the first time of asking captain James Horwill picked up and planted the ball over the Bulls try line. Cooper converts. 39 -23 to the Reds with 75 mins played.

The Bulls managed a late consolation try and Basson, who had looked threatening all night, crossed over for his second and his 5th of the season, a neat chip over the helpless Morahan as he over for the try. Steyn converted to take the final score to 39 -30 for the Reds in a thrilling encounter.