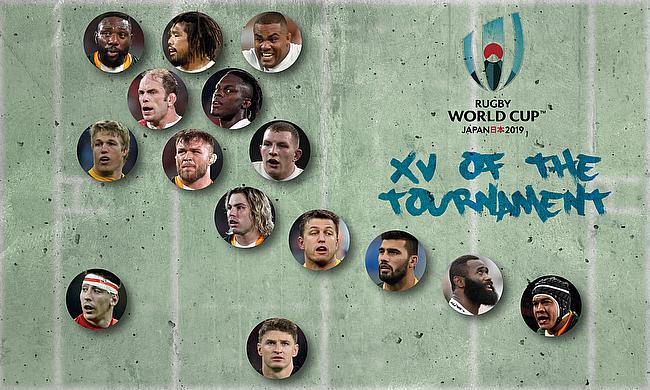 As the dust begins to settle on South Africa’s third Rugby World Cup title victory, Talking Rugby Union and Pure VPN have put together their XV of the tournament.

1. Tendai Mtawarira (South Africa) - At the age of 34, Mtawarira proved that he still has what it takes to be a top class performer on the international stage. Playing solidly throughout the tournament, the loosehead’s best performance was no doubt in the final where he demolished England’s scrum.

2. Shota Horie (Japan) - When South Africa knocked Japan out of their home World Cup, it also represented the last time that rugby fans in the west see Shota Horie play. The 33 year old hooker was magnificent for Jamie Joseph’s side, playing virtually every minute. Energetic and not too bad at throwing the ball in the lineout, Horie outclassed each of his opposite numbers.

3. Kyle Sinckler (England) - Removed from the final just two minutes in due to a head injury, Kyle Sinckler established himself as one of the world’s leading tightheads in Japan. With soft hands and an aggressive nature, the Harlequins man scrummaged well and was effective in the loose in the five games he played a major part in helping England to the final.

4. Alun Wyn Jones (Wales) - Aged 34, this is likely to be Jones’ last appearance at a World Cup as a player. Captaining his side, the lock once more wowed in Japan. Carrying to good effect, what was most noticeable about the Osprey’s man was his leadership. Commanding the attention of his teammates when speaking, Jones will no doubt carry on as Wales captain for the near future.

5. Maro Itoje (England) - Handed the keys to England’s lineout midway through the tournament, Maro Itoje looked head and shoulders above the player he was in 2016 making his England debut. Collecting several turnovers against New Zealand in particular, Itoje will be a mainstay in this England side for years to come.

6. Pieter-Steph du Toit (South Africa) - At his second World Cup, du Toit was easily South Africa’s biggest weapon throughout this tournament. Imperious at the breakdown and brutal in defence, the openside’s performances also earned him World Men’s Player of the year quite deservedly.

7. Sam Underhill (England) - At his first World Cup, Underhill and his flank partner Tom Curry have endeared themselves to the rugby world with their performances against Australia and New Zealand. A threat over the ball and titanic in defence, Underhill scarily can still improve his game and will no doubt be thinking about 2023 already.

8. Duane Vermeulen (South Africa) - Coaxed out of international retirement last year, Vermeulen received the man of the match award for his efforts in the final. Doing the ugly things well, Vermeulen’s efforts were a huge contributing factor to South Africa’s World Cup win.

9. Faf De Klerk (South Africa) - Sale Sharks number nine was yet another South African to have had an extremely impressive tournament. Kicking extremely well and operating particularly well alongside his halfback partner Handre Pollard, de Klerk was a joy to watch at times doing everything extremely well.

10. Handre Pollard (South Africa) - Still only 25 it is already getting to the point were Pollard has won everything in the game. On his way to Montpellier now, the flyhalf’s kicking is what really caught the eye in Japan. Consistent whether it was off the tee or from hand, the playmaker pulled the strings well too.

11. Josh Adams (Wales) - Finishing as the tournament’s leading try scorer with seven tries, Adams’ rise to stardom has been meteoric. Cast away from Welsh rugby aged 20, the wing found a home in Worcester that nurtured him into a world class talent. One of the most consistent players to break the gainline in Japan, Adams earnt each of his tries for Warren Gatland’s team.

12. Damian De Allende (South Africa) - Making 235 meters this tournament, De Allende really came to the fore as a world class centre in Japan. Extremely powerful and adept in attack the 27 year old put his nation onto his back at time to drag them to the final. His reward, the Webb Ellis Cup. (HM Farrell)

13. Semi Radradra (Fiji) - Rugby league convert Radradra did not enjoy a good start to the tournament in Japan, losing to Australia and Uruguay early on, the centre sprung into life against Georgia, playing a pivotal part in the Fijians 45-10 win. Carrying for a staggering 400 meters, you should really keep an eye out for this man.

14. Cheslin Kolbe (South Africa) - Despite only pulling on the green of the Springboks four times at this tournament, Kolbe as he had done all last season with Toulouse, caught the eye. Scoring three tries, including one that put the final to bed, the wing showed that size wasn’t everything and the finer skills in rugby are still there.

15. Beauden Barrett (New Zealand) - Only kicking one penalty in Japan, the majority of Beauden Barrett’s work was done in attack for the All Blacks. Moved to fullback ahead of the tournament, the back scored three tries of his own, whilst setting up several of his friends up too. Falling short of the final this tournament, the Blues man was still a joy to watch.

To find out more about PureVPN and how you can watch the Rugby World Cup Final 2019 from wherever you are, take a look at this simple guide: https://www.purevpn.com/stream-sports/watch-rugby-world-cup-live