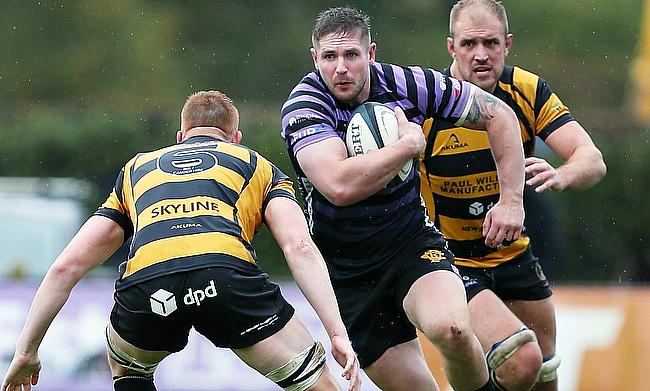 The weather conditions which greeted Round Five in the National Leagues were atrocious, but the wind and the rain didn't dampen the spirits across the three divisions.

Rosslyn Park edged out Bishop's Stortford 14-13 at The Rock to move to the summit of National One.

Stortford's George Cullen missed two penalties in the final 20 minutes which could have secured the victory for the visitors, but it was Park who were able to clinch their fifth win on the bounce.

After 24 minutes, it was 6-3 to the hosts with Owen Waters collecting the points for Kieran Power's men and Park scored the only try of the first period as Hugo Ellis dotted down from close range.

Waters landed a superb penalty at the beginning of the second half to keep the home side in control, but Stortford surged back into the game as Aiden Burnett's converted try was swiftly followed by a Cullen penalty.

However, the Stortford fly-half could not add to his tally in the final quarter as Park held on for another victory.

Cinderford are now the only other side in National One to pick up five wins from five after they beat Tonbridge Juddians 21-12 in awful weather conditions at The Slade.

The hosts were ahead at half-time, with Tom White knocking over nine points from the tee whilst a penalty try kept Cinderford in touch.

White increased his and TJs' tally after the break with another penalty, but it was the boot of Liam Hemming which turned the tide in the visitors' favour. He landed three penalties to put his side in front before Cinderford rubber-stamped the victory when Will Baldwin finished off the best move of the match to cross late on.

Follow the link below to read the match report from Saturdays game vs @Rams_RFC https://t.co/xilT16icjS pic.twitter.com/iWsQCFGj3Y

Taunton ended Rams RFC's 100 per cent start to the season after Titans full-back Gary Kingdom scored a last-gasp penalty to snatch an 18-17 win.

The hosts had trailed 17-3 at the start of the second period but turned the game on its head at Veritas Park.

Converted scores from Ellis Jones put the Rams 15-3 up at the break after Kingdom had slotted a penalty on 19 minutes.

Andrew Humberstone's penalty extended the lead for the away side, but Taunton came roaring back thanks to tries from Francisco Diaz Dart and Sam Prior.

Kingdom converted the latter of the two scores to tie the game and with the clock deep in the red, the National League stalwart showed his class once again to seal a dramatic win for Taunton.

Down at the wrong end of National One, Darlington Mowden Park remain winless after suffering a 27-22 defeat against Caldy, with winger Ben Jones kicking 17 points for the Wirral outfit whilst Leeds Tykes also find themselves in the bottom three after losing 21-17 away at Sale FC.

The Tykes had led 17-5 but saw their advantage fade away and the Yorkshire outfit also had Tom Williams sent off five minutes from time.

Elsewhere in the third tier, the 14-men of Chinnor held off a late Blackheath revival to secure a 34-28 win whilst Cambridge hooker Ben Brownlie scored his second hat-trick of the season as the Blood and Sand beat Birmingham Moseley 32-7.

Rotherham Titans are the new National Two North leaders after a storming second-half display helped them to a 28-13 win over title rivals Fylde.

His opposite number, Greg Smith, pinged over three points to keep the Lancashire side ahead, but Callum Bustin's converted score and another penalty from West gave the hosts the lead.

Just after the hour, Smith cut the deficit to three points, but Rotherham were able to tip the game in their favour as tries from Richard Stout and Bustin were enough to maintain the Titans' unbeaten start to the season.

With Fylde tasting defeat for the first time this term, Sedgley Park have moved up to second in the standings following a 20-6 win over Bournville.

Mitch McGahan opened the scoring from the tee for Bournville, but the afternoon's first try came on 35 minutes as Jacob Tansey crossed the whitewash for Sedge.

The visitors hit back before the break as Max Craven landed a penalty, but that was as good as it got for the Midlands club at Park Lane.

Huge congratulations to @piggycollins who runs out at 10 today for @sedgleytigers for the 200th time ?????????? #tigers #200caps #rugby pic.twitter.com/E1wHev6Hat

On his 200th appearance for Sedge, Steve Collins knocked over a penalty before Andy Riley and Rhys Henderson weighed in with tries to push the Tigers further ahead.

The hosts didn't make things easy for themselves, though, as Oli Glasse, Bob Birtwell and Henderson were all yellow-carded in the final 10 minutes but Sedge were able to see the game out.

Hull Ionians are up to third in National Two North after beating Harrogate 36-13 at Rudding Lane.

There was a first-half try for Callam Sanderson for the I's, but they did trail 13-8 shortly after the interval as Jacob Percival's converted score added to two Sam Fox penalties.

However, the away side surged clear in the final 30 minutes as Joe Makin, George Mewburn and Josh Britton all touched down, with fly-half Ben Smith kicking 13 second-half points.

Elsewhere in the division, Hull made it four wins from five as they beat Tynedale 17-11 away from home whilst tries from Ben Murphy and Robert Aikman secured Luctonians' first win of the campaign as they defeated Huddersfield 12-10.

There were also maiden victories for Chester and Wharfedale, who beat Sheffield Tigers (35-24) and Blaydon (23-8), respectively.

Worthing Raiders took advantage of Rochford Hundred's ill-discipline to seal a 17-0 win, keeping the Sussex side at the top of National Two South.

Yellow-cards shown to Ricki Gould and Damien Brambley proved costly for Rochford Hundred as Jonathan Whittall touched down for Worthing whilst Matt McLean landed a penalty at the start of the second period.

The score remained 10-0 up until the visitors had a third player sent to the sin-bin, as Ashton Bevans-Royston became the latest Rochford Hundred name to go into referee Matthew Sharpe's book.

And the Raiders capitalised on the extra man once again as Nathan Jibulu crossed two minutes from time to keep his side at the summit of the division.

Clifton bounced back from their Round Four defeat against Henley Hawks by beating out Hinckley at Station Road.

The Lavender and Blacks produced their usual fast start as they were awarded a penalty try before Andrew Simmers' score put them further ahead.

Adam Johnson's try on 32 minutes kept Hinckley to within seven points of their hosts, but in testing weather conditions, both sides could only exchange a pair of penalties in the second half as Clifton saw out the win whilst Hinckley left Bristol with a losing bonus-point.

Well, now we have all calmed down after yesterday’s exciting game! We now look forward to welcoming 2nd place Clifton to The Rec next Saturday! Another tough encounter!! pic.twitter.com/kQP3YkqIxE

Redruth remain the only unbeaten side in National Two South after Dean Bonds' late try sealed a pulsating 22-21 victory against Old Albanian.

Fraser Honey held his nerve to slot the resulting conversion as the Reds preserved their winning start to the season in dramatic fashion.

OA's were 14-12 up at the interval thanks to a brace from Elliott McPhun, whilst Redruth's tries came via Steele Barker and Kyle Bradley.

The visitors kept themselves ahead through an Alessandro Ricci score, but the hosts regathered themselves and turned the game around in the final quarter.

Honey landed a penalty and five minutes from time, Bonds came up with the goods to secure a fourth straight win for Nigel Hambly's charges.

Round Five saw Guernsey Raiders host their first league match for nearly 600 days and the Footes Lane faithful were treated to another victory. Anthony Armstrong and Charlie Currie both scored tries as Jordan Reynolds' side beat Leicester Lions 17-5 to stretch their winning run to four games.

Elsewhere, Barnes produced a superb second-half fightback as they came from 17 points down to draw 17-17 with Esher at Molesey Road whilst Dings Crusaders made it two wins on the spin as they beat Canterbury 17-0 at The Marine Travel Ground.

For the best reaction to all the weekend’s results, subscribe to The National League Rugby Review Show…