The rise of Sam James 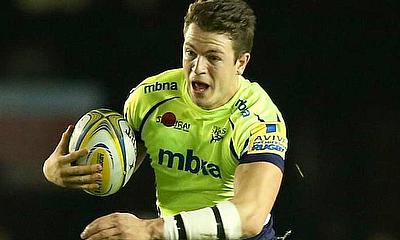 It’s still early days, but Sale Sharks centre Sam James is beginning to look like the next prodigious talent to come out of the North-West and the club’s academy.

It wouldn’t be that surprising if you hadn’t heard of James up until his recent try-scoring exploits for Sale, as the player hasn’t enjoyed the same fanfare as many other emerging English talents over the last few years.

James wasn’t a part of the 2013 or 2014 Junior World Championship-winning sides, initially being stymied by Henry Slade and Ollie Devoto in 2013, the latter of whom he shares many physical traits and attributes with, and then by Billy Burns in 2014.

Then a fly-half, James has now reinvented himself into a very effective and skilful centre, much as Devoto has done with Bath. With Danny Cipriani entrenched as Sale’s starting fly-half, the decision has been a smart one by James and the Sale coaching staff. The Sale back line is built around Cipriani and as talented a prospect as James may be, there was unlikely to be anything but a role as Cipriani’s deputy for the foreseeable future down the fly-half road.

Now, utilising all the guile and skill he accrued as a fly-half, James is taking the first steps towards revolutionising the Sale back line and helping take some of the weight and responsibility of running the line off of Cipriani’s shoulders.

Critical for James in realising that goal, is the fact he is a player who combines good fundamental skills with a willingness to play heads-up rugby, and at no time was that more apparent than during his first Sale try against Northampton in Round 3 of this Aviva Premiership season.

As you can see below, Sale have a potential three-on-two, with one of the two Northampton defenders a tight five forward. Tom Arscott actually ships his pass to Josh Beaumont slightly too early, which allows Courtney Lawes to drift across instead of having to commit to a tackle on Arscott.

Beaumont does well to straighten the line, running directly at the space between Lawes and Ken Pisi. Lawes is able to make the tackle, but it causes just enough hesitation in Pisi (look at his eye line) to give James the space on the outside to turn on the afterburners and slip past the Samoan. The pass from Beaumont is also worthy of note.

After ghosting around the outside of Pisi, James is confronted by the last line of defence, Stephen Myler. Instead of trying to beat his man for pace or looking to break the tackle, James recognises the abundance of clean air behind Myler and that there is no covering scrum-half or full-back at home. He drops a neat little kick over and behind the defender.

The ball does take a nice bounce up as James arrives, but ultimately it is the precision of his kick and the awareness of players’ positions which allows him to take the ball under little-to-no pressure from the defence. It is then a simple run in for the try. 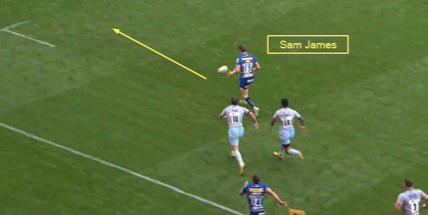 Combined with his skill and understanding of the game, James is also a bit of a lump. At 6 foot 4 inches and weighing in at close to 15 stone, defences certainly have to respect the power that James can generate, seemingly sitting in that midfield sweet spot of being not so big as to lose speed, but certainly big enough to really test the strength of defenders’ inside shoulders.

It’s been running these cutbacks against inside shoulders where the young man has also had success. His stint playing for the Border Bulldogs in the U21 Currie Cup back in 2012 seems to have paid off, as the lines he runs wouldn’t look out of place among Springbok centres playing on the firm grounds of the Highveld.

With Sale close to the try line against Harlequins this past week, Cipriani and James run the switch, bringing James back against the grain of the Quins defence. Both the fly-half and the centre can see that the Quins defence has them matched on the outside and instead choose to run inside against the less mobile forwards.

James is able to then step off of his left foot, shifting the point of contact enough to allow him to break the outstretched arm tackle from the first Quins defender.

Two forwards meet James just short of the line, with one tackling him low around the legs and the other higher, in an attempt to prevent him from falling over the try line. 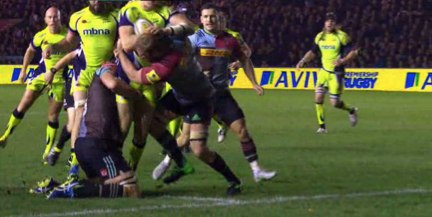 The momentum that James takes into the contact is too much for the pair and he crashes over the try line. Having kept his arms high going into the contact, he is free to dot the ball down without too much difficulty.

This is what Sale ask of Sam Tuitupou and Jonny Leota week in, week out and are tasks they both excel in, particularly off of the late, elegant passes from Cipriani on the gain line. The fact that James is also capable of doing this has certainly eased his transition into the first XV.

Once James is more comfortable in that XV, it will be interesting to see how he affects Cipriani’s game. The fly-half is one of the most dangerous runners with ball in hand at his position, but with a centre pairing of Tuitupou and Leota resembling the hammer more than the knife, he often has to be the playmaker at two points in the back line, regularly looping around to receive the ball after the centres and distributing once more to the wings or full-back. Occasionally Mike Haley will join the line and act as a second playmaker, but with James at 13, it’s less likely to be required and can free up Haley to work alongside a wing and try to create two-on-ones out wide.

With some of that responsibility off of Cipriani’s shoulders, it should free him up to run at defenders more and cause defensive lines another type of headache. Cipriani has touched the ball 169 times through the opening four rounds of the Premiership season, but has only run with the ball 13 times. This means that Cipriani is only running with the ball 7.7% of the time he has possession and while still very effective, it’s under-utilising one of his greatest strengths.

With New Zealand rugby and the All Blacks so in vogue right now, James has to ability to take on the Conrad Smith role in Sale’s back line. Working outside of a powerful carrier at 12 (Tuitupou or Leota) that will draw men as well as punch holes, James can be the link between the midfield and the wide men and add more variety to an already effective back line.

A powerful carrier with soft hands, an intelligent kicking game and great rugby awareness, James is just starting out on what should be a long and successful career. As mentioned earlier, it’s early days and he still has a lot to work on, but he is already showing the kind of promise which could see him add to the bevvy of options England have for the 13 jersey in the near future.