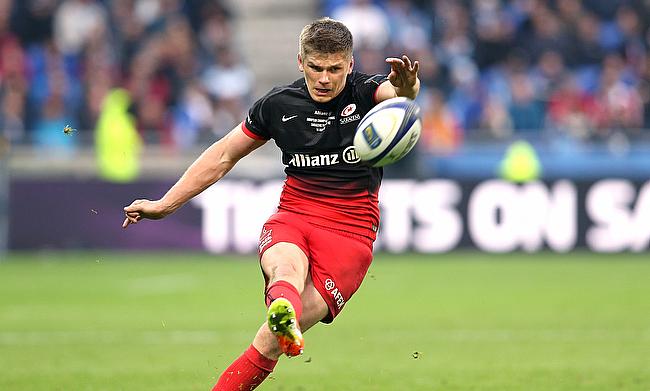 England international Owen Farrell has penned a new five-year contract with Aviva Premiership club Saracens ahead of the 2017/18 season.

The 25-year-old made his professional rugby debut with the Allianz Park outfit in 2008 and has made 152 appearances for them since then. He has been an integral part of the club as they registered three Aviva Premiership titles and back to back European Champions Cup triumph.

Farrell, who was named as one of the vice-captains during England's Six Nations tournament earlier this year believes he can propel his career to a different level with Saracens in the coming seasons.

"It's an opportunity to hopefully grow with this group again for the next few years, to get better and improve on what we've already done," Farrell said.

Farrell is a product of Saracens Academy, which has also developed players like Maro Itoje, Jamie George and Mako Vunipola. All the four players were part of the recent British and Irish Lions tour of New Zealand and Farrell wants the players to challenge themselves in achieving greater heights.

"We've known each other for such a long time now. We're all best mates," Farrell said.

"To come through with them and be able to spend day in and day out with them, to share what we are doing, is the most important thing.

"This team's got a long way to go still. To see how far we can take it is exciting."

Saracens rugby director Mark McCall is delighted with the news of Farrell remaining at Allianz Park until 2022 and is confident of him having a bright future.

"Owen has developed into one of the leading players in world rugby since he graduated from the Saracens academy," McCall said.

"He is one of our own, so for him to commit his long-term future to the club is huge news - we're delighted that he'll be extending his stay.

"He continues to set the standards as a player both for Saracens and on the international scene.

"The whole club is looking forward to seeing him excel in a Saracens shirt at Allianz Park over the coming years."