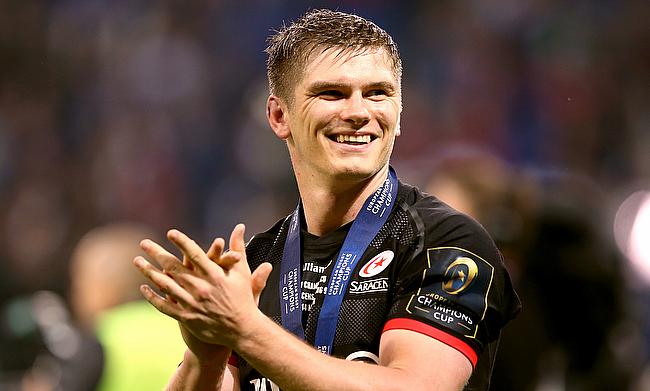 The star fly-half is yet to make an appearance in the 2016/17 Aviva Premiership after suffering a back injury prior to the start of the season and in the absence of the 25-year-old, Alex Lozowski stepped-up for the Allianz Park outfit as they top the table after winning five out of the six games.

Revealing Farrell was with the squad during the recent clash against Wasps, McCall hopes to see the former England Under-20 in action soon.

"Owen was with the team for Wasps," said McCall, who revealed that Alex Goode could also be back from a knee injury.

"He warmed up with them and place kicked for the first time before the game. If everything goes to plan, then hopefully he'll be available for this weekend.

"He's an influential member of the squad and it's good to have him around the team.

"I think he could definitely come straight into the team, six weeks isn't so long. We'll asses that in training.

"Alex Lozowski has put his case forward so it's a big shout for us, but Owen is a world-class fly-half.

"For us to have won five of our first six league games without the likes of Owen, Duncan Taylor and Chris Ashton is a good achievement."

Jamie George led Saracens' charge on Sunday with a double try as McCall's men handed Wasps' their first defeat of the season, completing a 30-14 victory which also took them to the top of the table.

Wasps were trailing by just two points until the last 15 minutes when George took the game away from them by scoring two tries in a span of five minutes. Giving credit to the way Wasps played, rugby director Dai Young admitted that they were beaten by a better team.

"We lost to the better team. We weren't allowed to play. You have to give Saracens a lot of credit, they really strangled us and didn't allow us to play," Wasps director of rugby Dai Young said.

"We've made a really good start to the season, but we've come to the home of the double champions and it was a little too much for us.

"It's not all doom and gloom because it's the first game we've lost, but if you're going to lose to anyone it should be the double winners.

"We're disappointed because we didn't look like we fired enough shots, but that's because of how good Saracens were defensively."