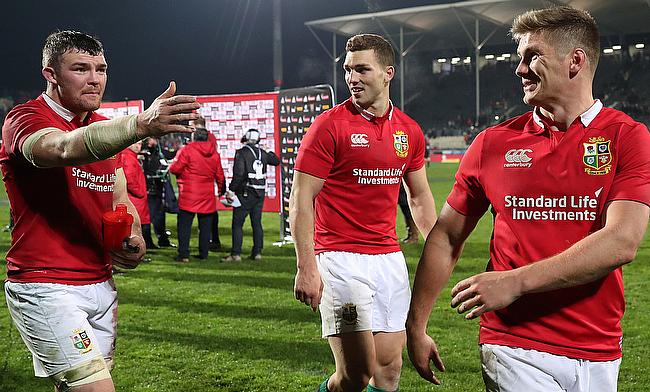 Owen Farrell with four penalties helped the British and Irish Lions to over-power Super Rugby's unbeaten Crusaders 3-12 in a grueling affair at AMI Stadium in Christchurch on Saturday.

The win today has helped Warren Gatland's men to push the tour right back on track after suffering 22-16 defeat against the Blues three days before.

In a try-less 80 minutes encounter full of physical prowess displayed by both the sides, it was Farrell's consistency in scoring the penalties which made the difference for the Lions.

The Crusaders were penalized on the 12th minute on their 10-meter line for being off their feet, as Farrell took the opportunity to open Lions' account on the scoreboard.

Three minutes after the first penalty, another opportunity walked up to Farrell after Crusaders prop Joe Moody was penalized in the scrum. Farrell doubled the Lions’ lead by splitting the posts once again.

The home side finally got a scoring opportunity on the 24th minute with a penalty after Bryn Hall and Matt Todd combined well down the left to get around the Lions defence. Richie Mo'unga made no mistake with the kick to finally open Crusaders account on the scoreboard.

The Lions earned another penalty on the 30th minute, this time well under the posts to allow Farrell to kick his third three-pointer of the match to restore the six points lead for his side.

On 35th minute the Crusaders almost scored a try with a driving maul before the TMO decided to not award them the try following inconclusive replays from various angles.

The Lions were looking promising to score a try on the concluding minute of the first-half after a great kick from Farrell, right on the five-meter line, however, the Crusaders defence managed to turn it over as the hooter went off.

Right from the word go, the Lions were much better compared to their previous performance with Conor Murray and Farrell bringing exactly what was hoped of them with George Kruis and Jamie George improving the lineout.

Mo’unga kicked-off the second-half for the Crusaders as they trailed by six points.

On the 57th minute the Lions almost managed to score a try after a great run from CJ Stander allowed Anthony Watson to get across the line, however, the TMO noticed a knock-on from Liam Williams thereby disallowing the try and awarding a scrum to the Crusaders.

Another chance went down begging on the 60th minute after Watson streaked clear down the left with Sexton as the Irishman’s pass back inside was fumbled by Stander.

A penalty opportunity for Farrell right in front of the posts on the 70th minute extended the lead for the visitors beyond more than a score for the hosts.

The Crusaders were unable to create any further scoring opportunities as the scoreline remained 3-12 at the full-time whistle.

Despite being unable to score a try on the scoreboard, it was a hugely magnificent win for the Lions, who have instilled new life into their tour. A win built on defence where they managed to suffocate the Crusaders for a better part of the game.