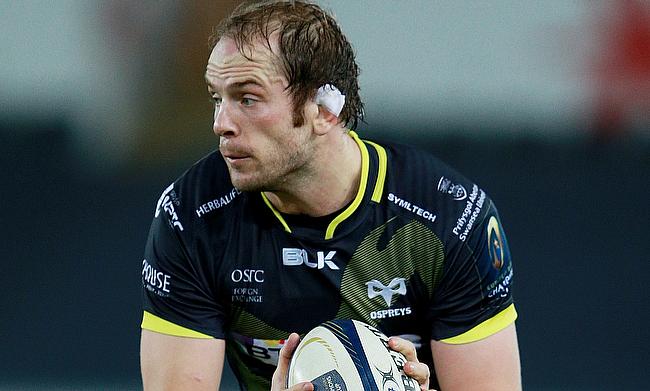 The Ospreys claimed their 12th win in 15 games over the Scarlets, winning an entertaining Guinness PRO12 derby 27-26 in Llanelli – re-vitalising their play-off hopes.

The hosts had gone into the game as league leaders, with their rivals eighth in the table - but it was the Ospreys who came out on top, notwithstanding a dramatic finish which saw Steve Shingler miss a chance to win the game for the hosts with a penalty he skewed wide.

The visitors were not ahead until the 59th minute but deserved their win after a battling forward effort, inspired by Alun Wyn Jones.

For the Scarlets, John Barclay and Aled Thomas scored tries - with Thomas supplying the rest of the points.

The Scarlets started the stronger, helped by uncharacteristic indiscipline from the visitors, who gave away needless penalties.

The first try for the hosts came on 10 minutes when a powerful attack stretched the Ospreys, allowing Hadleigh Parkes to send Barclay in behind the posts.

Biggar kept the Ospreys in the hunt with his boot - and when Dirksen blasted through Davies' attempted tackle from close range - Biggar converted, the Ospreys were level at 13-13.

Scarlets then regained the initiative through a Davies touchdown, only to lose Jake Ball to a yellow card after a no-arms clear-out.

Ospreys took advantage when the outstanding Alun Wyn Jones crashed over on the stroke of half-time, with Biggar's conversion squaring matters.

But indiscipline continued to blight the visitors - they gave away a couple more penalties early in the second period, which Thomas kicked to put his side 26-20 in front.

Then came the defining passage of play. After Justin Tipuric halted a Scarlets attack, the ball was spread wide where tight-head prop Dmitri Arhip sped clear of the cover for Eli Walker to touch down.

Shingler could have won it with a penalty shot from around 35 metres - but in windy conditions he could not find the target.