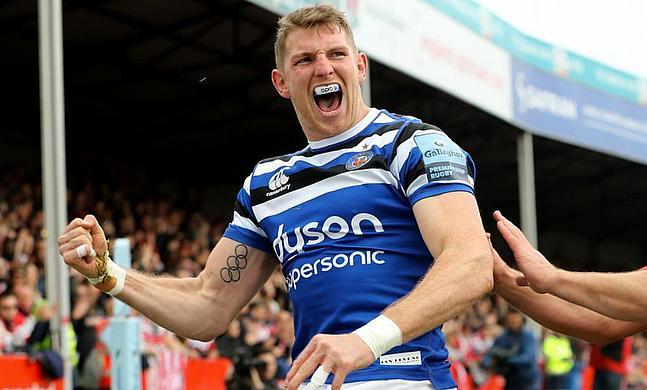 The versatile back, who switched from Sevens to the longer format of the game last summer, will start for England on Friday night against Italy as Eddie Jones’ side conclude their World Cup preparations in Newcastle.

McConnochie was in line to start for England in both warm-up matches against Wales last month, but niggling injuries have delayed his debut.

His remarkable rise has been well documented as an impressive maiden campaign with Bath earned him a surprise call-up to Jones’ 31-man World Cup squad and Watson, who won an Olympic silver medal with McConnochie at the Rio Olympics in 2016, is delighted to see his former team-mate heading to Japan.

“He is a quality bloke, to start off with,” Watson told TRU. “He is a great guy and along with it, he works so hard and it is great to see. I was there when he first started Sevens and he has just got better and better.

?? | Find out from Bath Rugby's Olympic medallist Ruaridh McConnochie on what it takes to make it to the top ?? pic.twitter.com/le3KcMSII0

“He ended up being one of the, if not the best player in the team and now the exact same thing has happened with XVs. He has taken to it so well. I think he really started playing around Christmas time and now he has got into the England squad.

“One thing that Sevens definitely does is obviously make you feel comfortable with the ball in hand which Ruaridh has shown. I think it is just the technical side of XVs which you have to get used to, but if there is anyone who is going to be working hard in training and trying to get better at rugby or at their position, Ruaridh is going to be your guy.

“I have no doubt that in Bath he has knuckled down and sat down with coaches to understand his role and it has shown.”

Watson would also have been pleased to see younger brother Anthony named at full-back for Friday’s clash against Italy at St James’ Park.

After suffering a serious Achilles injury, Watson’s World Cup hopes were in doubt but the Bath man recovered from his ‘nightmare’ setback to feature in both warm-up matches against Wales.

“It is amazing to see,” added Watson. “He has not had it easy to be fair; 13 months out is a long time. As a mate and a brother, it is impressive to see to be honest. He has been out for that long so to come back straight into an international game and play as well as he has done, fair play to him. He is an impressive guy.”

England and Bath back Anthony Watson says he feels in the shape of his life following his injury nightmare ?? https://t.co/qwnFiQr5z7 pic.twitter.com/EUj5IKA5FH

Similarly to brothers Anthony and Callum (who is preparing for a season in National One with Chinnor), Watson has also had his own recent injury problems.

Following his move to current club Wasps from Newcastle, Watson’s first year-and-a-half at the Ricoh Arena was plagued by injuries and at one stage, his future in the Midlands was in the balance.

However, a flurry of strong performances towards the end of last season, combined with a new contract, means Watson is ready to hit the ground running in the Gallagher Premiership this term.

“It has been a tough year and half for me just coming in and out of injuries, but I was quite happy to have a good run of games last year and I felt a lot better,” said Watson,

“Like I have said before with my feet and Achilles, when they are sore and I realise I can’t sprint or sidestep, I am in trouble so it is nice not have that anymore!

“More importantly for me, having this pre-season under my belt is key because I don’t know when the last time I went through a whole pre-season was. I am feeling pretty good now so hopefully I can carry on from playing last season and see how I get on.

Wasps finished in eighth place last season, but only five points off the top four following one of the most competitive Premiership campaigns in recent times.

Dai Young has once again brought some exciting talent to the club this summer with World Cup winner Malaki Fekitoa a standout signing whilst the Director of Rugby has also added some young talent to his squad.

Wasps begin the new term in the Premiership Cup against Saracens in just over two weeks time whilst their domestic season kicks-off on October 20th when they host newly-promoted London Irish.

Watson added: “Some of the players we have signed are young as well as some proven internationals which is awesome for us. As a team, considering how long the Premiership is, it is important to have a big squad. I’d like to think we have got that with our strength in depth this season.

“We are going to be going out after a long pre-season, with a new squad, but with pretty much the same ambitions to challenge. Hopefully this team gels well and we will see how we start off.

“With the World Cup and stuff, there will be a couple of complications but we are not missing too many boys for that which probably helps us a bit and we have got some quality players so hopefully we will go well.”