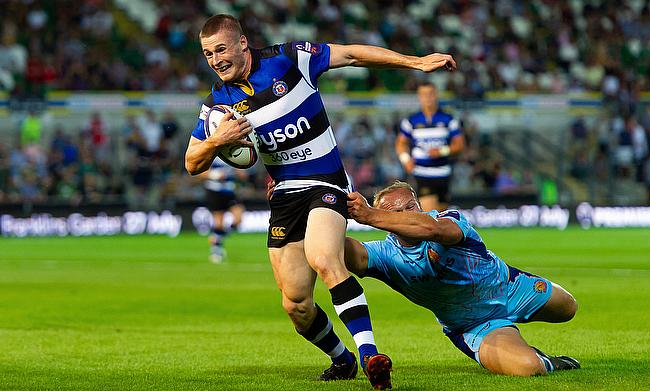 How St Mary's University and Old Elthamians are paving the way for the future
Leitch: 'I have been given loads of support and that has given me the opportunity to play for my country'
Exeter dominate Loughborough as they continue to close in on domestic title
'It is out of our control. All we have to do is focus on ourselves'

The race for top spot in BUCS Super Rugby took another twist this week as three of the leading candidates for the domestic crown failed to win.

The University of Exeter had the chance to all but clinch the title on Wednesday, but they were left stunned by Durham University in the ‘Varsity Match’ at Sandy Park.

The reason why Exeter could have put the champagne on ice was because rivals Hartpury University lost to Loughborough University while Cardiff Met had to settle for a draw as they let a 19-point lead slip against Leeds Beckett University.

However, on Friday night, the University of Bath grasped the opportunity to move into the top two as they snatched a late victory against Northumbria University at Kingston Park.

So, after another fascinating round of action, Exeter are nine points clear of second placed Bath while Hartpury and Durham make up the top four as the season reaches its climax.

Below is a round-up from an intriguing week in BUCS Super Rugby plus, we bring you the latest from across some of the other university leagues and cups.

Durham University stunned the University of Exeter as the BUCS Super Rugby leaders fell to a late defeat at Sandy Park.

After moving closer to retaining the domestic title in recent weeks, Exeter were 21-5 up at half-time following scores from Rory McMeikan, Joe Salkeld and Sal M’boge.

However, after beginning the first period with a try, Durham started the second 40 by dotting down on a couple of occasions to cut Exeter’s lead to two points.

Congratulations to @DURFC and good luck for the rest of the season.
Massive response needed next week now.#BUCSSuperRugby #EXEDUR

Ralph Marchant scored almost instantly to give Exeter the bonus-point, but Keith Fleming’s side were left shell-shocked as Durham responded.

The visitors scored on the hour and their fifth try with just three minutes remaining concluded the fightback as Alex Keay’s men completed the double against the table toppers.

The defeat for Exeter now leaves them nine points clear at the summit, but if they were to secure a victory over Bath next Wednesday, they would be crowned league champions for the second successive year.

The University of Bath scored two late tries to move up to second in the BUCS Super Rugby standings.

Scores from Ethan Hutt and Alex Nisbett, as well as a penalty from Will Partington, helped Bath into a 20-19 lead at half-time.

George Wacokecoke and James Elliot crossed for the home side and for a large portion of the second period, Northumbria were in control.

Tom Galbraith went over before a sensational individual score from Wacokecoke made it 36-20, however, Bath rustled up a remarkable fightback.

A try, plus another kick from Partington, reduced the deficit to six points and the visitors ramped up the pressure on the Northumbria line.

Ed Bloodworth was sin-binned for the hosts in the closing stages and Bath took full advantage as they ran in two late scores to snatch the victory.

Hartpury University’s hopes of claiming the BUCS Super Rugby league title are now extremely slim as they fell to a defeat against Loughborough University.

A try, plus a penalty from James Forrester, gave Hartpury an 8-7 interval advantage.

Jamie Wrigley scored Loughborough’s try, but a strong period of possession at the beginning of the second-half allowed Hartpury to stretch their advantage.

However, Max Hill cut a brilliant line to dart over for the hosts on 56 minutes and Loughborough were able to hold firm for the rest of the contest to secure only their fourth win of the campaign.

The result for Loughborough leaves them one point off the play-off places while Hartpury trail league leaders Exeter by 12 points, with three games remaining in their season.

Cardiff Met’s BUCS Super Rugby title chances are now over as Leeds Beckett produced a sensational comeback to force a draw in Yorkshire.

The away side looked in control as tries from Andrew Nurse (2), George Gladding and Luke Northmore helped them lead 22-3.

However, a penalty try plus scores by Dan Grant-Adamson, John Okafor and Johnny Keh saw Beckett snatch a draw to stretch their unbeaten run to six matches.

As for Met, they can no longer win the domestic crown and Danny Milton’s side will now be focused on securing a home quarter-final in the play-offs.

Nottingham Trent University’s aspirations of avoiding the relegation place in BUCS Super Rugby suffered a setback as they lost narrowly to an in-form Cardiff University.

Trent rumbled over for the only score of the first half and they led 7-3 at half-time as the hosts responded from the tee.

However, Cardiff pressure was rewarded with Freddie Barns’ try and that proved to be enough for Alun Wyn Davies side as they clinched their third win from their last four matches.

In terms of Trent, they are now 10 points shy of ninth-placed Loughborough, with three matches in their season left to play.

With Hartpury unable to challenge for promotion to BUCS Super Rugby due to their first XV competing in the league, it means Swansea will now have the chance to earn a place in the top tier when the play-offs come around next month.

Hartpury did bounce back from their only defeat of the season as they hammered Bath 2nds 55-12 on Wednesday while the University of Bristol concluded their term with a thrilling 32-21 victory over Exeter 2nds.

With the top two sides in North B not in league action due to cup commitments, Leeds Beckett 2nds strengthened their grip on third place following a 43-31 win over the University of Stirling while the University of Manchester beat Durham 3rds 19-16.

In the only game in Scottish 1A this week, the University of St Andrews kept their slim title hopes alive after beating winless Aberdeen 2nds 24-17. Scott Lawson’s side are now six points off the top with two matches remaining, but they have played a game more than league leaders the University of Aberdeen 1XV.

Northern 2A and 3A

In Northern 2A, there was only one scheduled fixture for this week and table toppers Keele University were handed a walkover result against UCLAN. The outcome for Keele leaves them six points clear of nearest challengers Sheffield Hallam University, but the men from the Steel City do have a game in hand.

Liverpool John Moores University were unable to secure the title in Northern 3A on Wednesday as their match with Manchester Met 2nds was called off. LJM require just two more points to claim the league crown while elsewhere in this division, Bangor University beat Liverpool 3rds 38-12.

There was also only one fixture in Midlands 2A this week and Nottingham 3rds consolidated second spot after a 39-24 win over city rivals Nottingham Trent 3rds.

North B outfit the University of Glasgow progressed to the semi-finals of the BUCS Trophy after beating title rivals the University of Sheffield 31-19. They will be joined in the last four by South B’s Hartpury 3rds and Exeter 3rds. Hartpury won 39-36 away at Cardiff 2nds while Exeter were handed a walkover result against St Mary’s University.

The lowest ranked side left in the competition, Manchester Met University, advanced into the semi-finals as Rob Jones’ side produced an excellent performance to defeat the University of Aberdeen 48-0.

In the last four, Exeter will take on Glasgow while MMU go to Hartpury 3rds on March 6th.

The Northern Conference Cup final will be an all Northern 2B affair when Northumbria 2nds face the University of York. The North-East side beat Leeds 2nds 33-10 in the semi-finals while York defeated the University Chester 24-13 away from home.

The final will be played in two weeks’ time

As for the Midlands Conference Cup, holders De Montfort University are through to the final as the Midlands 2B side won 27-19 against Oxford Brookes 2nds. De Montfort will face Loughborough 4ths at Nottingham Trent on March 6th after they beat Birmingham 2nds 42-17.