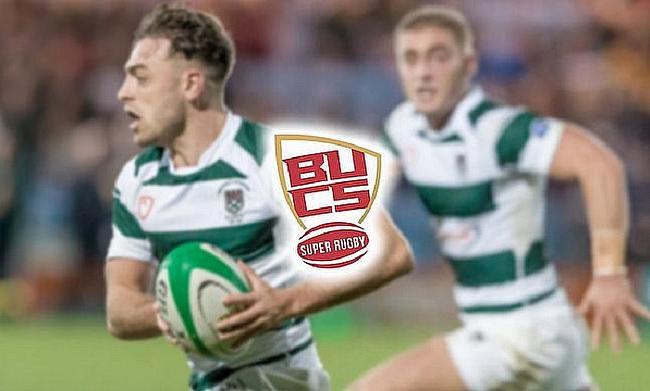 'It is out of our control. All we have to do is focus on ourselves'
Exeter thrash rivals Hartpury to move closer to BUCS Super Rugby title
'Hunger' of the players can drive MMU on - Jones
Simon Linsell: 'Put it this way, I am neutral these days!'

The University of Exeter are a step closer to retaining their BUCS Super Rugby league title after a dominant win over Loughborough University.

Keith Fleming’s side claimed a bonus-point victory at Topsham which leaves them 11 points clear of their nearest challengers Hartpury, with three fixtures left to play.

The aforementioned Hartpury bounced back from their loss against Exeter as they beat Cardiff Met University in a thrilling game on Wednesday night while the University of Bath are up to third place as a clinical second-half display helped them defeat Cardiff University.

Below is a full round-up of this week’s BUCS Super Rugby action plus, we reflect on title wins and promotion battles from across some of the other top University leagues.

The University of Exeter edged closer to the BUCS Super Rugby domestic title after an impressive bonus-point win over Loughborough University.

Joe Elderkin scored the opening try following strong phase play by the Green and Whites, but no further points were added in a disjointed first period.

FULL-TIME EXETER 31-5 @LboroRugby
After a disappointing first 40, Exeter rally in the second half with some strong carries and great scores to secure a bonus point win.

After the break, Matt Blee and Olly White both touched down as Exeter took control, but Loughborough were able to make it 17-5 with their first try of the afternoon.

However, Ralph Marchant and Charlie Davies nipped in to wrap up the bonus-point victory for Exeter who are now 11 points clear at the summit, with three league matches left to play.

After a humbling defeat against the University of Exeter last week, the hosts flew out of the blocks as Harry Holland and Max Clementson went over while Scotland U20 international Nathan Chamberlain added a penalty.

This was a repeat of last year’s BUCS Super Rugby Championship final and just like at Twickenham, Cardiff Met fought back to take the lead following tries from George Gladding, Chris Lewis and Eduardo Balocco.

Russell Bennett landed a penalty as Met scored 22 unanswered points, but the home side mustered up a response in the second half.

Two penalties from Chamberlain plus tries via Robbie Smith, Ervin Muric and Jack Johnson ultimately sealed the win for Hartpury, while Met claimed a losing bonus-point thanks to a late try.

The win for Hartpury moves them up to second in the league standings, but they remain 11 points behind leaders Exeter with a game in hand , while Cardiff Met have dropped to fourth.

Man of the Match Nathan Chamberlain: “I think we just needed to stay calm. Last week, it got a bit hectic and it was that composure we needed. We just stayed calm and played in the right areas.

“That [Twickenham] is the main aim. We want to be back at Twickenham so hopefully that can happen. We just want to play our normal rugby and that starts from now. We have bounced back after that loss to Exeter and we’re raring to go.”

The University of Bath produced a scintillating second-half performance to earn a convincing victory over Cardiff University.

Owen Williams’ try gave the visitors an early lead, but two Will Partington penalties and a score from Hugo Stiles put Bath in front.

Cardiff were able to reduce Bath’s lead to a single point as James Davies darted over, but the Welsh side were blown away by their hosts after half-time.

Williams did grab his second and a consolation for Cardiff in the closing stages, but importantly, Alun Wyn Davies’ side remain in the play-off positions with three games to go.

University of Bath captain Tom Doughty speaking to Team Bath: “I am immensely proud of the boys. We owed it to ourselves and all watching tonight to get a result after losing to Cardiff a couple of weeks ago.

“We said before the game that we didn’t just want to win, we wanted to make a statement and we did that. The game opened up a bit in the second half and we trusted our ball skills.”

Chester Duff and Kieran Davies went over for the hosts as they held a comfortable lead at the break, with Connor Lloyd and Davies also landing penalties.

Northumbria did strike before half-time and they were able to score first after the interval to make it 24-10.

However, Duff and Johan Visser both touched down to keep the home side in the ascendency while a Penalty Try and a further score wrapped up the win.

Northumbria did manage a third try in Yorkshire, but it was merely a consolation for Darren Fearn’s side.

Nottingham Trent University remain at the foot of the BUCS Super Rugby table after losing to an impressive Durham University.

The hosts pulled clear in the first half as Paddy McDuell, Jacob Collin, Fred Davies and Fitz Harding all went over to help Durham to a 24-3 lead at the interval.

FULL TIME: 48-3 to Durham. Thanks to all those who came down tonight to Hollow Drift #bleedpalatinate @TeamDurham

Myles Rawstron-Rudd crossed for Durham and the home side added another score before being awarded a penalty try in a one-sided second half.

Luke Chadwick put the icing on the cake for Durham late on as Alex Keay’s side waltzed to victory.

Durham University secured the Premier North title after a superb 46-5 win away at second-placed Northumbria University. Durham have won all nine of their domestic games this term and they have clinched the title with one match remaining.

The University of Exeter took a massive stride towards the Premier South title as they beat rivals Hartpury 31-12. The current BUCS champions secured their eighth win in a row and they require just three more points to seal the Premier South crown because mathematically, Hartpury can still catch them.

Second-placed Cardiff Met cannot win Premier South this term, despite beating the University of Bristol 50-12. The Archers are 13 points behind Exeter, with just one game in their season remaining. Elsewhere, Swansea University beat Oxford University 27-5.

Champions Newcastle University won their final league game of the season as they beat Durham 2nds 24-10. Newcastle lost on just one occasion during the domestic campaign and they will head into the BUCS Super Rugby play-offs with confidence behind them.

Hartpury 2nds have won the South A title after defeating rivals the University of South Wales 51-45. Hartpury 2nds cannot challenge for a place in BUCS Super Rugby due to their 1st XV being in the top tier so it will be between USW and Swansea University for a play-off place.

USW have now played all of their 14 domestic matches while the Swansea University are now five points behind their Welsh rivals after a convincing win against the University of Bristol. Crucially, Swansea have a game in hand to come against Hartpury 2nds on Sunday, but they must pick up a bonus-point win to claim second spot.

Elsewhere in South A, UWE ended a 13-match losing streak to complete the season as the division’s bottom club beat Exeter 2nds.

The University of Sheffield took another step towards the North B title after beating Yorkshire rivals Leeds Beckett 2nds 45-36. Sheffield are now seven points clear of second-placed the University of Glasgow who weren’t in action this week.

St Mary’s University maintained their 100 per cent record this season following a commanding 31-15 win over the University of Portsmouth. The league leaders are two points clear with three matches remaining in their season while second-placed Exeter 3rds continued to keep the pressure on after beating Cardiff Met 3rds 40-10. Elsewhere, Cardiff 2nds clinched a narrow, but enthralling 44-43 win over Reading University.

Heriot-Watt University were able to close the gap at the top of Scottish 1A to a single point after defeating the University of St Andrews 38-26 away from home. The Edinburgh side have one game left in their season while league leaders, the University of Aberdeen, have three matches remaining.

Meanwhile in this division, the University of Dundee breezed to a 38-7 win against bottom of the table Aberdeen 2nds.

Manchester Met University are arguably now in control of the title race in Northern 1A after beating rivals Newcastle 2nds 49-7. Rob Jones’ side are now one point behind second placed Newcastle as MMU aim for back-to-back promotions.

MMU also have games in hand over league leaders the University of Liverpool who beat Durham 4ths 46-7 on Wednesday. Liverpool are three points clear at the summit having played one fixture more than MMU so the title race is set to go the distance. Elsewhere, Newcastle 3rds sealed a 19-14 win against the University of Hull.

Sheffield Hallam are now only one point behind Northern 2A leaders Keele University after beating the Staffordshire outfit 21-19. Both teams have played the same number of matches with just three games to go in the season.

Meanwhile, Liverpool 2nds beat Manchester 2nds 34-20 away from home and Lancaster University got the better of UCLAN.

Northumbria 2nds missed the chance to take another step towards the Northern 2B title as they lost their first league game of the season against Leeds Beckett 3rds. The Yorkshire side won 19-17 meaning Northumbria have a 10-point lead at the top with one game in their season remaining.

Second-placed the University of York thrashed Leeds Beckett 4ths 79-0 to keep the title race alive and with York having two games in hand over Northumbria, the race for top spot is well and truly on. Elsewhere, Leeds 3rds hammered Sheffield 2nds 53-0.

Liverpool John Moores University are closing in on the Northern 3A title as they hammered city rivals Liverpool 3rds 44-0. LJM haven’t sealed the championship just yet as Manchester Met 2nds cruised to a 62-10 victory over Edge Hill University.

80’ Champagne rugby as Ollie Green still can’t stop running, laying the platform for freshers Harrison and Rob to combine for Mr Cusick to cross in the corner. Gallimore can’t convert, so the game ends 44-0

MMU are nine points behind LJM having played the same number of fixtures, but second-placed the University of Chester can no longer win the Northern 3A crown after losing 41-31 away at Bangor University. Chester sit eight points behind Liverpool John Moores, with only one game remaining in their season.

York St John University thrashed Newcastle 4ths 71-12 to edge closer to the Northern 3B title. The table toppers, who have one match remaining, are 12 points clear of second-placed the University of Huddersfield who beat Sheffield Hallam 2nds 10-7.

Field have three games in hand so mathematically, they can still win the league. Elsewhere, Leeds 3rds’ hopes of title glory were ended as they lost 19-12 to York 2nds.

Harper Adams University went to the summit of Midlands 1A after beating title rivals the University of Warwick 28-10. Harper Adams have gone top on ‘Points Difference’ and they have played a game less than second-placed Warwick. Meanwhile, Oxford Brookes University comfortably beat Nottingham Trent 2nds 33-0.

In Midlands 2A, the University of East Anglia have won the league after a ninth straight victory. They beat Warwick 2nds 32-12 on their travels to clinch the title with one game to spare.

The reason why East Anglia have been crowned champions was also because second-placed Nottingham 3rds lost 18-14 to Coventry University at Coventrians RFC while elsewhere, Birmingham 3rds won 26-10 against Nottingham Trent 3rds.