'It is out of our control. All we have to do is focus on ourselves' 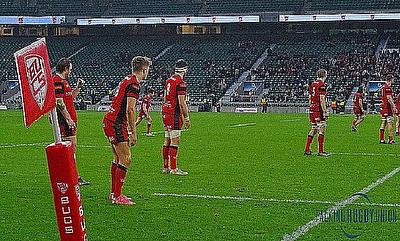 Hartpury missed out on the league crown last year, but were able to claim the big prize at Twickenham
©TRU

Exeter thrash rivals Hartpury to move closer to BUCS Super Rugby title
'Hunger' of the players can drive MMU on - Jones
Simon Linsell: 'Put it this way, I am neutral these days!'
University of Exeter battle to victory to increase lead

Will Crane admits the BUCS Super Rugby domestic title is now out of Hartpury’s hands, but declared: “All we have to do is focus on ourselves and whatever happens, happens.”

Cardiff Met visit the Gillmans Ground on Wednesday and the Hartpury captain expects his side to produce a response after a humbling defeat against rivals the University of Exeter.

Their 45-21 loss to Exeter last week was a significant blow to their league aspirations as Hartpury now sit 11 points off the top, with a game in hand.

And Crane insists Hartpury must concentrate on themselves in their remaining domestic matches.

“The lads were gutted after last week,” Crane said. “It was a massive game we were targeting because of where we were in the league.

“We were third with a game in hand so we thought if we were to win that game, we would put ourselves right into the mix with Exeter to push on and go for the title.

“The lads hadn’t played for about six weeks and I think we just had too many unforced errors in the midfield. Exeter were really good and stuck to their game plan well. They were physical and took us apart in the set-piece.

“It [the title] is a little bit out of our control now, certainly with Exeter having four home games to finish the season. All we have to do is focus on ourselves and whatever happens, happens.

“We want to right a few wrongs this week and get back to winning ways so we can put ourselves in the best possible position to finish as high as we can. It’s about just focusing on us. Hopefully the rest will fall into place.”

Crane revealed the long-term goal for Hartpury is to make a return to Twickenham.

Since BUCS Super Rugby was introduced in 2016/17, Hartpury have won both Championship titles, but Crane stressed he wasn't looking too far ahead with five league games left to play.

“There is some belief there [to reach Twickenham] as I imagine there is in every squad,” he said.

“That is the big prize at the end of the season, but we’re focusing on these next five games first. Hopefully, we improve every week and see where we are come the play-offs.

“We want to get those performances right and get everything ironed out to make sure we are playing to the best of our ability as a team.

“If that opportunity comes to play at Twickenham, I think everyone in the squad will be over the moon to be there again. There is a lot of rugby to be played between now and then, but certainly, we are looking forward to the challenge.”

Hartpury have seen former captains Seb Negri and Tom Pashley both lift silverware at England HQ over the last two campaigns and this season, Crane has been skippering the side.

Unfortunately for the second-year Sports Businesses Management student, he has been sidelined since the beginning of December after suffering a hamstring injury against Exeter, but Crane has enjoyed his extra responsibility this term and is looking forward to returning to action.

“I got injured earlier in the season where the hamstring came off the bone,” Crane said.

"It means I haven’t been able to play as much as I want, but it has been a great honour to captain the lads. It is certainly a role I am very much enjoying.”

Crane will be an avid spectator on Wednesday evening when Cardiff Met arrive in Gloucestershire to face Sean Lynn’s men.

Last week, the Welsh side also had their title ambitions dented as they were beaten 23-7 at home against the University of Bath meaning the Archers are 10 points behind Exeter having played the same number of matches.

They have also lost three games on the spin and this is the first time the two teams have met since Hartpury beat Cardiff Met 27-24 in last year’s final at Twickenham, but Crane is fully aware of the threat Danny Milton’s side will pose.

He added: “It will be the first time that we have played Cardiff Met since Twickenham so there will be that bit of edge in the air.

“We have done our analysis of them over the past week and we know they are a very good side. It is a game we are not taking lightly at all and I am sure it will be the same for them. At Hartpury, there is very much a winning culture and all the lads are really looking for to it.”

Also in BUCS Super Rugby this week, Exeter can take another step towards the league title when they host a Loughborough University side who are fighting for the play-offs while third-placed Northumbria University travel to an in-form Leeds Beckett University.

Elsewhere, the University of Bath host a buoyant Cardiff University and bottom of the table Nottingham Trent University go to Durham University.