Northern Hemisphere: Do we need a re-structure? 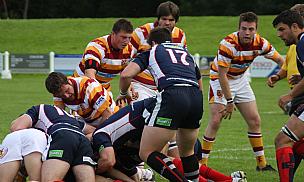 Is it time to move the Six Nations to later in the year?

If you spend any time reading online rugby forums, there is a chance that at some point you will have seen a debate regarding whether the Northern Hemisphere season needs restructuring. Whether you are an international fan, disgruntled at the tri-nations' sides being better prepared for the autumn internationals, or a club supporter, fed up of losing star players for large chunks of the season, there is a valid argument for a restructuring of the season.

Let's start by looking at the Southern Hemisphere season. The Super Rugby season starts in February and extends into July or August. This is followed directly afterwards by the Tri-Nations, or as it will now be known the Rugby Championship with the season ending with a tour to Europe. Barring a couple of internationals against touring nations, the Super Rugby season in uninterrupted. Neither is the preparation of the national sides, who by the end of the season have spent over 3 months playing and training together. It is a streamlined system that allows the best preparation for both clubs and international sides.

Compare that to the fragmented season in the Northern Hemisphere, where the domestic season begins in September. The month of November is disrupted by the Autumn Internationals; the same is true for February and March during the Six Nations. Sides with a high number of international players often suffer during this period and see there league position slip. By April the domestic season is all but halted by the knock-out stages of various competitions. Those who have not reached knock-out stages find themselves going weeks without games. The season is then rounded off by a third bout of internationals as the home nations go on tour in the Southern Hemisphere.

As can be seen the Northern Hemisphere season hampers the progress of the national sides and of the clubs sides. So is there a way that the season could be streamlined to better suit all parties? It may be controversial but there is a way.

The domestic leagues start in September and run uninterrupted until the Autumn Internationals. The only games played during the international window are development games such as the LV cup. The domestic leagues resume in December before coming to an end in February. The focus then switches to the European competitions, such as Heineken and Amlin cups, with the pool stages and subsequent knock-out stages taking place over a 9 week period.

With the domestic season over in early April, international sides could then gather in preparation for a condensed Six Nations, taking place over 5 weeks in April and May. This would allow international sides to stay together following the tournament for a June tour to the Southern Hemisphere.

Moving the Six Nations to the end of the domestic season would be controversial. You are changing over a 100 years of rugby history, upsetting fans, sponsors and broadcasters alike. Yet from a rugby perspective it would make sense. Clubs would no longer lose their top players for large chunks of the season. Players would be able to build from domestic to European competition and then international more easily. As for the international sides, it would allow a more compact season, giving all sides additional time together and prepare for strenuous tours to the Southern Hemisphere.

The other benefit is that every player would have a longer off-season. Those who do not feature in international sides would have an extended off-season from April until September. International players could return from action and be slowly introduced into the domestic season. There would be no need to rush back for the early rounds of the Heineken Cup. Nor would the season be disrupted by a World Cup; there would be no need to move Heineken Cup games and the domestic leagues could continue albeit without the top international players.

This will, of course, never become reality. There would be too much opposition from the many parties involved with the game; broadcasters, sponsors, players, supporters; all of whom would need to work together to achieve the goal. However, as far as I can tell the benefits of a re-structure are clear.