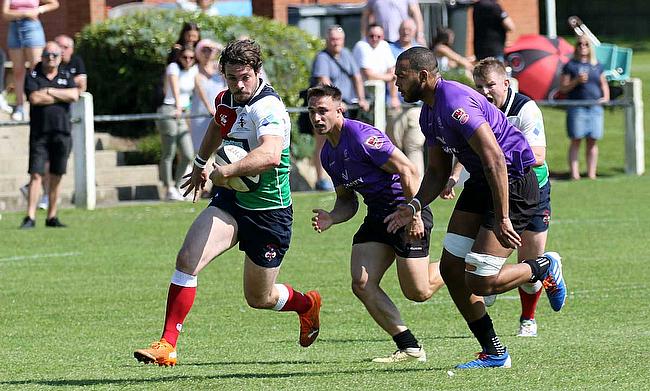 Despite suffering a defeat to Loughborough, Hull Ionians are level on points with the top two in National Two North
©Brian Norman / Hull Ionians

Park take top spot, Titans are singing in the rain and Bonds gives Reds a license to thrill
Rams roar into October, title credentials in spotlight at Rotherham and Redruth out to maintain winning start
Rams continue strong start, Fylde produce stunning display and Henley seal highly emotional
Unbeaten starts the flavour of the weekend across the National Leagues

There are top of the table clashes across National One, National Two North and National Two South in Round Six, so who can show they can go the distance this season?

If any of you have watched BT Sport's promos over the last month, the latest instalment of Tyson Fury vs Deontay Wilder should be firmly imprinted in your minds. The blockbuster clash takes place in Las Vegas in the early hours of Sunday morning, but let’s be honest, the heavyweight bout between Rosslyn Park and Rams RFC is top of the billing this weekend.

Last Saturday, Park - who currently lead the way in National One - made it five victories on the spin, but they had to dig deep in order to keep their winning start intact. A 14-13 triumph against Bishop’s Stortford could easily have gone against Kieran Power’s side if the visitors hadn’t missed two penalties, but the current table-toppers were able to see the game out.

Rams RFC (3rd) would have also liked to welcome Park to Old Bath Road with an unbeaten record to their name, but Seb Reynolds’ charges saw a 17-3 lead slip away from them in Round Five against Taunton Titans. A late Gary Kingdom penalty completed a marvellous comeback and condemned the Berkshire club to their first defeat of the season.

In 2019/20, the Rams beat Rosslyn Park 27-20 in this corresponding fixture when both looked like title contenders. Nearly 24 months on, the duo are at it again, but who can deliver a knockout blow in front of the National League Rugby cameras?

?? Captain Hugo Ellis leading from the front with Park's try against @BSRUGBY.

With Rams and Rosslyn Park going toe-to-toe in Round Six, second-placed Cinderford are yet to chuck in the towel on their perfect beginning to the term. The Foresters head into this weekend’s meeting with Plymouth Albion with a record of 5-0 after extending their unbeaten start against Tonbridge Juddians last time out.

When the first bell rings on Saturday afternoon, Plymouth Albion will start bottom of the pile in National One following four successive defeats in September. Damian Welch’s side fulfilled their bye-week during the last round of fixtures and maybe that has allowed Albion to go back to their corner and regather themselves after a tough opening month. Have they got it in them to floor Cinderford at Dockham Road?

Despite sitting in the bottom three alongside Plymouth, the gloves have certainly been off for Darlington Mowden Park in this campaign. Yes, they are winless in five matches but DMP have picked up four bonus points in defeat, including in their 27-22 loss to Caldy last weekend.

Of course, head coach Garry Law would rather his side stop the rot as soon as possible, but when they enter the ring against Bishop’s Stortford on Saturday, he will know his players won’t lack grit and determination. In terms of the away side, Tom Coleman’s men were mightily close to beating Rosslyn Park in Round Five but came up agonisingly short in testing weather conditions in the capital. Now it is a trip north for Stortford, so can they come out on top in this contest?

Also in National One this weekend, Chinnor and Caldy will be hoping to put in another winning display when they meet on the Wirral whilst Taunton Titans also spar with Sale FC in the North West. Elsewhere, Birmingham Moseley face-off with Tonbridge Juddians and Blackheath and Cambridge collide at Well Hall.

If you thought title race chatter in National Two North was going to fade away after five rounds of action, then think again. League leaders Rotherham Titans certainly showed signs they could go the distance this season after defeating rivals Fylde last time out, with Martin Jenkinson’s men maintaining their unbeaten start to the campaign.

The big occasions keep coming thick and fast for the Yorkshire outfit and on Saturday, they take the 47-mile trip to third-placed Hull Ionians who are currently level on points with the table toppers. After being on the end of a Loughborough Students sucker punch in Round Four, the I’s hit back immediately as they produced a ‘committed’ and ‘disciplined’ display to seal a bonus-point win over Harrogate. It’s another all-Yorkshire affair in National Two North, but what will be the outcome?

Sedgley Park enter this weekend sandwiched between the aforementioned Rotherham and Hull Ionians following their excellent start to the season. Scott Barrow’s charges are yet to be knocked down this term and they extended their unbeaten run with a 20-6 win over Bournville in Round Five.

Once again, they are showing all the signs of meeting the required weight to launch a title bid and Sedge now head to Blaydon in Round Six keen to continue their momentum.

Onlookers may see this as a mismatch at Crowtrees given Keith Laughlin’s side are the only team in the division without a win to their name, but they did put in an encouraging second-half display against Wharfedale last Saturday. However, the North East outfit know they will have to be at their very best this weekend or it could be another brutal afternoon.

We head back to Yorkshire for National Two North’s featured game of the week as Hull continue to keep pace with the early frontrunners in the division. Gary Pearce’s side have put together a combination of four wins from five matches which leaves them just one point off the top as they prepare to welcome Loughborough to Chanterlands Avenue.

Despite sitting in eighth place, the Students may also believe they are part of the ‘title chasing’ landscape in this league after stringing together successive wins against Luctonians, and perhaps more impressively, Hull Ionians at the end of September. The Midlands club weren’t in action last week as their fixture with Stourbridge was postponed due to Covid concerns, and now with a game in hand, they will be eager to reignite their campaign against their next opponent.

Elsewhere in National Two North this weekend, Fylde will be looking to bounce back from last Saturday’s defeat against Rotherham Titans when they host Wharfedale and Stourbridge return to action against Huddersfield as they go in search of their fifth straight victory. Meanwhile, Bournville visit Sheffield Tigers and Chester face Tynedale at Hare Lane. Harrogate v Luctonians has been postponed due to positive Covid cases in the Yorkshire side's camp.

Since hitting the canvas against Canterbury in Round Three, Worthing Raiders have dusted themselves off and remain the league leaders in National Two South. The Sussex club produced another professional display, especially in the second period, to see off Rochford Hundred last time out and they head into this weekend with a one-point advantage over their title rivals.

The Raiders will be aiming to make it a hat-trick of wins and the same applies to their hosts, Dings Crusaders. The Bristol outfit have fought their way past Bury St Edmunds and Canterbury over the last couple of weeks and find themselves sitting in the top six. While this might be the most challenging hurdle the Crusaders have faced this term, their recent results will give them confidence that they can overcome the pacesetters.

We began this weekend’s preview with a heavyweight clash and the boxing theme continues into National Two South as Clifton (2nd) and Redruth (3rd) meet in Cornwall. This fixture is tailor-made to be an early season classic with the former arriving at the Recreation Ground on the back of their fourth win of the campaign against Hinckley.

What a cracker of a game we have tomorrow at The Rec, 3rd vs 2nd in N2S, let’s all get down and support the lads and get the place pumping for this big clash!!

The Lavender and Blacks have now scored over 200 points this season, but Redruth might be their most dangerous opponents to date as the hosts head into this mouth-watering battle having won all four of their matches thus far. The Reds are back on home soil after getting past Old Albanian in thrilling fashion last time out, so this title-race bout has all the ingredients for one of these sides to send out a massive statement to the rest of the division.

National Two South’s featured game of the weekend comes at the wrong end of the table as Hinckley host Westcliff at Leicester Road. Neither team has tasted that feeling this season, but the Hornets come into Round Six with a bit more optimism after they displayed some battling qualities in defeat against high-flying Clifton last Saturday.

In terms of Westcliff, their clash with Henley Hawks was a foregone conclusion shortly after half-time as they slipped to their fifth straight defeat, so with both sides on the ropes at the moment, a victory for either could provide them with the springboard they are looking for.

Fourth-placed Guernsey Raiders will be keen to continue their very impressive run of form this weekend when they travel to Barnes whilst Esher will want to put a couple of disappointing results behind them as they take on Henley at Molesey Road. Elsewhere, Old Albanian host Rochford Hundred, Bury St Edmunds go to Leicester Lions and Canterbury face Barnstaple.