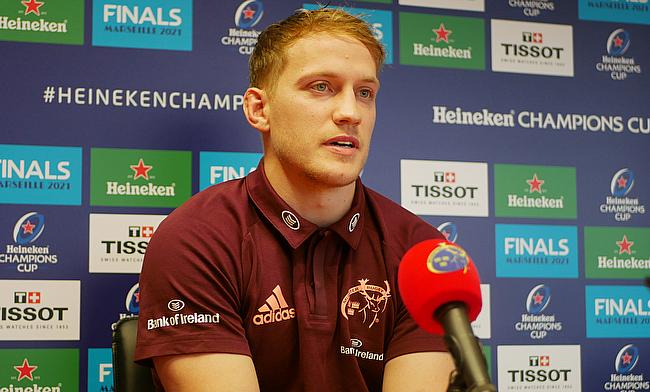 Mike Haley smiles when he is asked to confirm a particular Heineken Champions Cup stat.

The full-back has started in all but one of Munster’s European clashes since he joined the club in 2018: “I didn’t know that, so it is nice if it is true!”

The numerical facts don’t stop there either. After adjusting to his new surroundings in his debut season, followed by a 2019/20 campaign where he experienced injuries, the 26-year-old has hit the ground running this term and he is proving to be a vital component for head coach Johann van Graan.

Haley has gained the most metres for Munster so far this year (232) and he has successfully completed the highest number of offloads (6) at a club which heads into their continental campaign in scintillating form.

The men in red have won all seven of their Guinness Pro14 fixtures and it is clear Haley has been instrumental in Munster’s faultless start.

With no more #GuinnessPRO14 action until after Christmas, it's the perfect time to take stock of what has been an action-packed season so far ??

Where things stand ahead of the European break ?? https://t.co/NFsS9bEsCN pic.twitter.com/2ohSR8Zzi8

The Irish outfit will now be aiming to carry their momentum into the Heineken Champions Cup and given the condensed nature of this year's competition, adopting a winning habit could prove to be crucial. For Munster, their latest European adventure begins on Sunday against Harlequins.

“We are targeting this as a massive game,” said Haley. “It is the first game in Europe and we need to get off on a strong foot. I think the first couple of days of this week was about blending everyone back into the swing of things since the internationals left and they are obviously feeding back into it now and adding their presence which is great.

“We are putting pressure on ourselves to have a great performance this weekend to kick start this campaign.”

As Haley alludes to, Munster’s stars have returned after their Autumn Nations Cup duties with Ireland but in their absence, van Graan’s side have dropped just three points in the Pro14.

The club’s performance levels have not wavered during this period and Haley believes the depth and the competition for places within the squad is helping Munster stay on top of their game.

“Personally, I don’t think it is much of a surprise,” Haley said. “I think being in training every single day, you see the young lads fill in here and there when they get their opportunity. It was like ‘those lads [internationals] are gone, we need everyone here to step up’ and it was a massive challenge which we all embraced.

“It’s a good brand to be playing at the minute. When you are winning it is good fun. For me, I think I am probably just enjoying each game instead of worrying about anything else.”

The bonus of also having World Cup winner Damian de Allende around the squad during the internationals has added an exciting blend to Munster’s options and Haley was quick to point out the benefits which the Springbok is bringing to the team.

“He is a good lad to have around,” Haley added. "He is a joker, a very easy and relaxed guy and then he shows on the pitch how world-class he is.

“Overall, I think it is a credit to Munster in terms of the squad they have developed and brought together now. There is no real position where you’d be like ‘he’s a dead cert to be starting’.

“Everyone is on each other’s heels and hounding each other and that shows in games because if you don’t play your best, somebody else will. Damian has come in and he has raised the standards as well and he has brought his own views of how we can change things and everyone has taken that on board and it has been great.”

Haley is clearly soaking up the knowledge of his coaches and colleagues wherever possible and since the former Sale Shark arrived at Thomond Park, he has continued to improve as a player.

The full-back praised outgoing Sale Director of Rugby Steve Diamond for his development during his time in Manchester, but Haley feels the battle he has faced to try and nail down the 15 shirt at Munster has only spurred him on to get better.

“I owe him [Diamond] a lot of credit because he gave me a chance when I was a 17/18 years-old and that thankfully has got me here,” Haley continued.

“I think the competition has always been there [at Munster]. When I turned up, there was Andrew Conway who was fighting for it and there was Darren Sweetnam who can play full-back as well. Shane Daly has also been an unbelievable player for Munster so you need that depth. That is what drives the best teams to be the best. That needs to be on my mind that if I don’t play well, someone is going to take my spot and that is what makes you perform at your best.”

Here is your Munster side for #MUNvHAR as Gavin Coombes & @Doogz start on their European debuts.

Haley will make his sixth start of the season on Sunday when the two-time European champions take on Harlequins.

Paul Gustard’s side arrive in Ireland in good spirits after recovering from their chastening opening day defeat against Exeter Chiefs as they have beaten both Northampton Saints and Gloucester, respectively, in the last two weeks.

Integral to Quins’ quick revival has been fly-half Marcus Smith and whilst the young number 10 will look to dictate proceedings at Thomond Park, Haley insisted the visitors have a number of threats which Munster need to be wary of.

He added: “We have definitely looked at Marcus, but they have got very good players in that backline and they have got an exciting pack. Obviously, there will be a couple of old faces coming back to Thomond with Jerry [Flannery] and Jack Stafford so there will be some interest there, but they are a quality side so we will be looking at all their aspects of play and making sure we know what they are about.”

Munster faced English opposition in last year’s Champions Cup pool stages when they came up against Saracens, however, the boys in red failed to progress to the knockout rounds of the competition.

But given their start to this season, optimism around Munster's European chances is quite rightly growing and Haley hopes his side can make a statement on the continent in 2020/21.

“I think it [the importance of Europe to Munster] is something which has just been built into the bones here, especially by the fans. The fans have made it this special and that has been brought on by all the players and we understand it is the responsibility of us. It is driven by an expectation of their past glories. This is the competition we want to be the best at so for whatever reason it is, when this week comes around, you can just feel the intensity rises.

“We understand everything that comes with European rugby and Munster but come Sunday, we will be focused on the job at hand.”