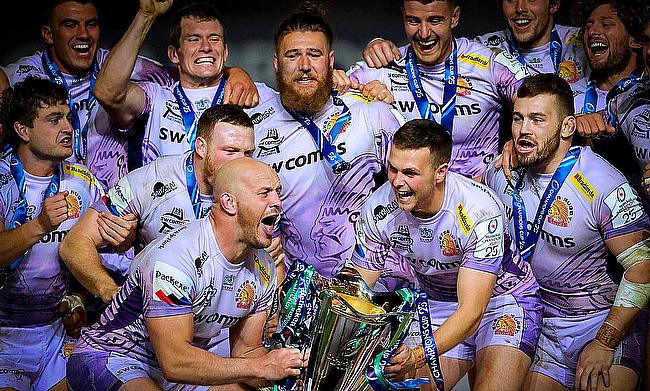 It will have only been seven weeks since Exeter Chiefs lifted the Champions Cup by the time the new European season begins.

Starting this Friday night in the East Midlands as a struggling Northampton Saints play host to Bordeaux, this year’s competition will feature a new format.

With four more clubs than usual, the overall European campaign will take place between December and January, with four rounds of pool matches before the knockout stages begin.

This will even involve a two-legged quarter-final and eight sides will drop out of the Champions Cup to the Challenge Cup for a round of 16 before the competition progresses to the quarter-finals, semi-finals and then the final.

There has also been a change as to how the pools are structured, with 12 teams across two groups, with sides playing teams based on a tier system that was determined by where they finished in their domestic leagues last season.

Confusing, right? Let's try and guide you through it...

Exeter Chiefs start the protection of their first European crown on Sunday. Having only lost Jonny Hill, Henry Slade and Luke Cowan-Dickie to England duty, Rob Baxter’s team have picked up from where they left off in the Premiership.

The champions have dispatched Harlequins, Bath and Leicester Tigers to secure three straight wins but the Chiefs now turn their attentions to Europe’s biggest prize and an opening pool fixture against Glasgow Warriors.

Both sides met in the same stage of the competition last season with the 31-31 draw at Scotstoun proving to be one of the standout fixtures, with former Glasgow man Stuart Hogg striking the bar with a long-range penalty late on.

The Chiefs will also take on Toulouse, who they beat in last season’s semi-finals, and Sam Simmonds says Exeter’s motivations have stayed the same.

“We’ve spoken about it already,” Simmonds said. “Last year was great. It is tougher to back it up, but we don’t want to be the team that is happy with competing and winning things for one year, we want to go back-to-back, we want to be putting our hands up again and kind of relish that feeling that we were the dominant team last year.

“Not much has changed in our squad, and not many new players have come in, and we haven’t lost any boys, so we’ll be as strong as we were last year.”

Exeter’s opponents in the second round are the side that still reign as Top 14 champions. Because of the league choosing to cancel its season in March, there was no name added to the Bouclier de Brennus’ winners list.

Such is the success of Toulouse, they have found themselves regularly without their biggest stars with the likes of Antoine Dupont and Romain Ntamack representing their country. It had an obvious knock-on effect as the club were lying in seventh place when the 2019/20 league season was cut short.

Added to this, an extremely tight schedule means that Head Coach Ugo Mola believes his side may not be as sharp as he'd like them to be.

“We’re going to take account of the fact that the schedule is currently quite packed and fluid, with these international competitions that have been added,” Mola said.

“So that delays our preparation for a European competition which remains one of Stade Toulousain’s objectives. So, I would rather say that we’re not in the best condition or we’ve not prepared in the best conditions, preparing with these timescales, but we need to deal with it, that’s how it is."

Leo Cullen’s Leinster would have been disappointed with their 2019/20 efforts in this competition. Off the boil against Saracens in September, the side have had exactly the kind of start to the season you would expect from them.

Barely putting a foot wrong in the Pro14, the Irish province will play Montpellier and Northampton Saints in Pool A, starting their new campaign in the south of France on Saturday evening.

“During the Guinness PRO14 we will normally chop and change our group for obvious reasons,” Cullen said. “We have international guys moving between the Irish camp and Leinster so there’s always challenges with that.

“For European games, you’ll have a full deck to pick from. We know there is very little margin for error within your pool.

“We’ve experienced that in the past where, if you lose your first game, it becomes a real challenge to try and get out of your pool. The fact that there’s only four pool games, that becomes even more of a challenge this year.”

Cullen will have the likes of Garry Ringrose, Johnny Sexton, Cian Healy, James Ryan, Hugo Keenan and more to choose from, with Munster also eagerly awaiting the return of their Irish stars.

Having lost fewer players to Andy Farrell’s squad, Munster have been dominant domestically and head into the European season on a seven-game winning run.

Showing impressive depth, along with some handy acquisitions, the two-time competition winners will have optimism going into this new campaign.

“I think we’re all ready to take that next step up,” De Allende said. “With getting the Irish guys back, I think when they come back into the squad, I think they’ll appreciate it a lot more because there has been a lot of hard work put in.

“And obviously, coming back from the international squad, you want guys to obviously stand out and take responsibility, but I think when they come back, they’ll actually just get a nice feeling and I know they will add a lot more to our squad than what we have already.”

A first ever European title for @BristolBears after an incredible display against @RCTofficiel ??

Alongside Munster in Pool B, Bristol Bears are the second team in the Champions Cup in possession of a European crown. Winning the Challenge Cup just a few weekends ago, Pat Lam’s side continue to take steps in the right direction.

It wasn’t long ago that they were in the Championship, battling it out against the likes of Nottingham and Bedford, but fast-forward to the present day and the club will be up against Clermont Auvergne and Connacht over the course of the next two weekends.

Finishing third overall in last year’s Premiership season, the Bristol story is already a fairytale, with Lam believing that their place in the Champions Cup is confirmation that the hard work being done on and off the field can take the Bears to the very top of club rugby.

“I think it’s good recognition for the work that everyone’s done and it gives everyone an understanding that if you do the work and we work together and we grow on and off the field, you’ll get the rewards,” Lam said. “It’s only a moment of inspiration. We talk about our visions and inspiring our community to bring rugby success.

“That [Challenge Cup] trophy gave huge inspiration to Bristolians and people in our community all around the world, but as they keep saying to the players when we came back, it’s just a moment. It’s now in the history books, which we can enjoy, but now it’s all about getting more and more of those moments, whether that’s trophies, whether that’s visiting kids, old people’s homes, hospitals.

“That’s the club we want to be and what we are, but now we want more and it certainly helps guys understand the process. To get that trophy, it took hard work, and if we want more, it requires more hard work.”

Elsewhere in the competition, last year’s Premiership finalists Wasps face Dragons and Montpellier in their pool fixtures whilst Bath take on Scarlets and La Rochelle.

Meanwhile, Sale Sharks come up against three-time Champions Cup winners Toulon and Edinburgh and in Pool B, Gloucester will meet Lyon and Ulster.