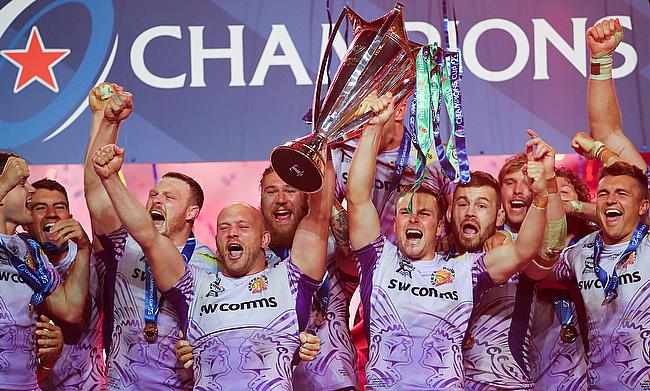 After the Gallagher Premiership and Heineken Champions Cup double last season, Exeter Chiefs have started the defence of their domestic title with a swagger.

Two comprehensive victories against Harlequins and Bath, backed up by a solid performance at Leicester Tigers, leaves Rob Baxter’s men sitting on top of the tree with maximum points.

Exeter’s second Premiership crown always felt within reach - despite having their hearts broken by Saracens in three previous finals – but last year’s European success really highlighted the rise of the Chiefs.

Having only progressed to the knockout stages of the Champions Cup on one occasion before the 2019/20 campaign, Exeter went all the way last season as they clinched their first European trophy and they are more than capable of repeating that feat this year.

Someone who was able to lift the Champions Cup twice during his career was Lawrence Dallaglio, and the former Wasps captain feels Exeter are showing no signs of taking their foot off the pedal.

Exeter's start to the season points to potentially more success for the Chiefs and after three straight wins in the Premiership, the focus quickly shifts to the return of the Heineken Champions Cup.

Speaking exclusively to TRU, Dallaglio said: “They are the holders, so it is probably as good a place to start as any! They only won the trophy a matter of a few weeks ago and winning is a habit and Exeter are in the groove of winning.

“They certainly don’t look like, in the small amount of time they had off, that they’ve lost any of that kind of hunger and enthusiasm. They are a very cohesive bunch, and they have got an excellent understanding of how they want to play the game. They are obviously a group of very technically gifted coaches and players, but there is something old school about Exeter which I like as well, and they won’t settle for what they achieved last year. What has changed not to suggest they are the favourites?”

On route to their European triumph, Exeter didn’t lose a single match, and their ‘winning habit’ may well be vital in this season’s adapted format of the competition.

In terms of pool fixtures, teams will only play four matches at this stage of the tournament meaning the significance of hitting the ground running could shape a club’s route to the quarter-finals.

Exeter were drawn into Pool B and will face Glasgow Warriors and Toulouse over the course and whilst the Chiefs dispatched the French outfit in last year’s semi-finals, Dallaglio feels the threats from the Top 14 clubs should not be dismissed.

He added: “If you look at the people who joined them [Exeter] in the semi-finals [Toulouse and Racing 92], I would put them up there as probably having the ability to win it and then you probably add Leinster into the mix.

“The French sides will come again. I can see Toulouse being very strong again. You have only got to look at the recent uplift in French rugby to see that it is not a temporary thing. The likes of [Antoine] Dupont, [Romain] Ntamack and a number of players are going to be driving that Toulouse side for a while so I can see them being challenging.

“Exeter dispatched them quite comfortably at Sandy Park, but you can argue if that game was in France, the result might well have been the same the other way so it will be interesting in the pool stages.

“Racing are always a little bit of a curious egg. They look, on paper, like a side that should have won it a couple of times already and they came close against Exeter last year, but they seem to do something that stops them. It is now about whether they have got the discipline to go all the way again so I can’t see beyond those guys and Leinster really.”

Latest #LooseHeadz podcast in association with @TalkRugbyUnion is available now. It was a pleasure to talk to @BenjaminKayser

As Dallaglio alludes to, the growing optimism around French rugby could see one of the Top 14 clubs clinch Europe’s biggest prize for the first since 2015 and on the international stage, France’s improvements have certainly been noticeable.

Following their exit from the World Cup last year, Les Bleus have been rejuvenated under Fabien Galthié and his new-look coaching staff. Moreover, the current depth in the French squad is something which cannot be ignored, as England found out last weekend.

Eddie Jones’ side were less than convincing against a weakened France outfit despite clinching the Autumn Nations Cup in extra-time, and the performance from the Six Nations champions left people questioning whether England can adapt their style of play when difficult situations arise.

Jones labelled the critics as “disrespectful” following England’s eighth consecutive win, and Dalliago can see both sides of the coin.

“In one way, Eddie shares the frustration of everyone else,” Dallaglio added. "He was talking about the state of rugby at the moment and the fact that it is sometimes easier to play without the ball. Look, the talent and places for competition in the team is key and exciting, but right now, he has come up with a gameplan which revolves around trying to take the risk of turning the ball over out of the game.

“He obviously found the comments last week very disparaging because England have just delivered a trophy, but I think the problem England have is we have all seen what they are capable of.

"The performances that Eddie has got out of this side, particularly thinking back to a couple of games against Ireland, and the quarters and semis of last year’s World Cup, they are the clear highlights. When you see rugby on one level, and you see what England have served up recently, it is fair to say they haven’t come close to recapturing their form.

“Ultimately, they are still winning. They are smiling, but it is hard to please everyone all the time. England, more often than not, have gone out there and played to their strengths and dominated physically up front and bashed and smashed their way to success. Still, when they are unable to do that, I think the challenge for this group is to work out a way of playing maybe when you’re not physically winning the battle or you’re only getting parity.

“It does feel like England get themselves down in some dead ends during games, and they are then not sure how they can get out of them until they get back into the changing room. I have been their myself, but I’d love to see the players taking on a bit more responsibility about how they play the game. The fact that England won and won the trophy, I am pretty happy with, and the depth we have is exciting too, but I would like to think what we have seen this autumn is part of a much bigger plan which will see England reach their potential."