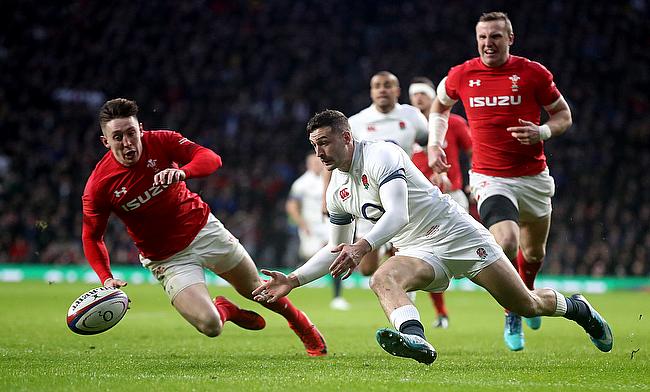 Jonny May goes in for the opening try
©Adam Davy/PA

England have earned their second victory as they continue their quest for the third consecutive Six Nations championship with a hard-fought 12-6 victory over Wales at the Twickenham Stadium on Saturday.

A brace of tries from Jonny May in the opening 20 minutes of the game set the tone in a brutal yet impressive contest between the two sides under wind and rain.

Fly-half Rhys Patchell got the proceedings started off for the visitors with a kick down the right but switching the other way. Josh Navidi forced Anthony Watson into a mistake which resulted in a spill. A tackle by Dylan Hartley without using his arms put Wales into a scrum just outside the England 22. However, Gareth Anscombe's rubber kick down the flank was gathered by George Ford as the game got off to a lively start.

On the third minute, Joseph managed to beat Patchell to a high kick followed by Owen Farrell's diagonal kick towards the left, into acres as May gathered the ball to tear 40 yards to the line! May had nothing but grass ahead of him as he timed his slide to perfection. The Conversion went wide right from Farrell.

After a dozens of phases on the 20th minute, following lots of quick ball at the ruck, England finally cracked the Wales defence open wide on the left, as a looping pass gather by Joe Launchbury was flicked inside to May, who touched down for his second! No mistake on the conversion this time from Farrell as England took a decent 12-0 lead in the contest.

The Wales decided to kick the three-pointer with their penalty as Patchell opened their account on the 24th minute.

A huge scuffle broke-down on the 33rd minute with Farrell and Aaron Shingler get involved with each other on the floor which ended-up both teams brawling in the old-school style.

The score at half-time remained 12-3 as both teams failed to make any addition to their tally in the remaining time.

The second-half witnessed less scoring with both teams committing many unforced errors and lack of penetration.

On the 76th minute, the game suddenly came alive after Anscombe scored a penalty following a high tackle from Ben Te'o, to bring Wales just a converted try away from the win.

However, in the dying moments, England managed to held-up Navidi as the ball was lost forward. Farrell booted it to touch as England clinged on for a hard-fought victory.

Mike Brown was awarded the man of the match award as Wales departed with a losing bonus point from the brutal contest.