Perkins out to impress Saracens 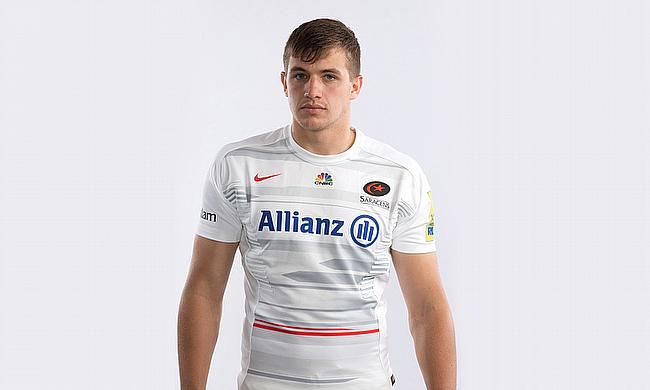 George Perkins talks exclusively to Talking Rugby Union on all things Saracens, England U20s and his current time on loan at Bedford Blues

At 19 years old, George Perkins has already had a taste of lifting silverware.

After being involved with both athletics and rugby when at school, Perkins opted to go down the rugby route and now finds himself part of a championship and LV=Cup winning team at Saracens.

Earlier in the year, Perkins represented his country at U20 level playing a huge hand in England winning the Six Nations and was also part of the side that narrowly missed out on their third consecutive Junior World Cup title in the summer.

Perkins has been involved with Saracens for five years now and even though he is currently playing for the English champions, the versatile back remains realistic about his short term goals.

“It was a fantastic season for the club last year and I think that helped me progress, “he told TRU.

“We have a lot of good players at the club and internationals too so to win the Aviva Premiership and LV=Cup was great. Working with these players helped me a lot and it has set me up nicely for this season.”

And this season, Perkins is out on loan at Championship side, the Bedford Blues.

Perkins’ first real taste of men rugby came during his time at the Old Albanian in National One last season, but he firmly believes that this experience with Bedford will only help enhance his game.

He said: “I think the whole idea of me being at Bedford is to get game time and obviously show Saracens what I can do.

“The Championship is a very good standard. I played against Bristol and London Welsh and its clear this is not very far off Premiership standard and it’s great for me to be there in helping me go forward.

“I’m still involved with the U20s with England, but for Saracans, I know there is a few A League games coming up and I’d like to be involved at a club level for them.

“The main thing is what I can do at Bedford. I want to get as much game time there and hopefully I can take that experience and my time with England into next season for Saracens.”

Considering Perkins has played for Saracens already in his career and represented England from U17 level, it isn’t a surprise to see him take such a mature mentality despite being sent out on loan.

Nothing seems to faze him. It is all about working hard and being the best he can be.

When Perkins’ has trained with Saracens, he hasn’t been in bad company either. The likes of Chris Ashton, Owen Farrell, Alex Goode, Ben Ransom and Dave Strettle (who joined Harlequins this summer) have been present and Perkins revealed how helpful these players have been during his development at the club.

He added: “Its huge that I am part of a squad with those guys. Training with them day in, day out and watching what they can do is great and working with them will only improve me as a player.

“I’ve learnt a lot from them. They are very happy to give me little pointers and tips about what I can do better and I go through some of my games with them to see what I can improve on too.”

Saracens began the defence of their Aviva Premiership title on Saturday with a thumping 41-3 win over Sale Sharks to see them take the early lead at the top of the table.

The Premiership season started later due to the Rugby World Cup. Added to that, the current champions were fairly quiet, in terms of recruitment, with just three new arrivals coming into the club which shows that Director of Rugby Mark McCall is keen for consistency within his squad.

And Perkins feels that McCall’s methods not only help the team as a whole, but really give the youngsters a chance to show what they are capable of.

Perkins said: “It was a long pre-season, but its been really good for me personally and Im feeling good about this season.

“In terms of the team it is the same. We’ve had good start to the year and it’s all about carrying that into the season and maintaining the level we know we can achieve.

He [Mark McCall] is a great coach. He is willing to talk to us whenever how we play and our game, but he’s put a lot of faith in the youngsters.

“He plays us in pre-season games and selects us for LV Cup matches and I was fortunate enough to play two of the games last year.

“We have a great pool of talent a Sarries with the likes of Maro Itoje, Hayden Thompson-Stringer, Nathan Earle and Nick Tompkins breaking through so it’s a good club to be a part of at the minute.

Perkins will also be targeting another season with England this year as they look to retain the U20 Six Nations title this as well as going one better in the Junior World Cup which is held in England next summer.

“With England, its a new year every year. We will put last year behind us,” he said.

“Personally, it was disappointing to lose in the World Cup final last year, but if I can make that right this season , that would be fantastic.

“It’s brilliant to be around the coaches and squad in this set-up and I have progressed through the year groups too. I’m now looking forward to this season and hopeful we can put in a good performance at the 6 Nations and go one better in the World Cup in June.”