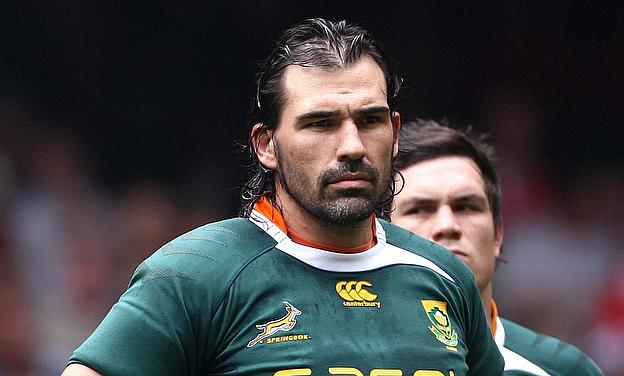 Victor Matfield has been chosen to lead the Springboks
©PA

South Africa Prepare for Wales Test
South Africa Team Selection - Brawn Or Pace?
Boks teach England a harsh lesson in Jo'burg
Who should follow up Peter de Villiers?
Springbok youngsters to look out for in the future

Victor Matfield will captain South Africa in their Test matches against Wales and Scotland this month.

Matfield, 37, retired from playing after the 2011 World Cup, but returned to action earlier this year after signing a deal with the Pretoria-based Bulls.

The towering lock will take over as skipper from centre Jean de Villiers, who is sidelined for eight weeks because of a knee injury.

Matfield, who has won 110 caps, will take the helm for Saturday's appointment with a World XV in Cape Town.

"Victor's appointment as interim captain is something I thought long and hard about, and it wasn't an easy decision to make," Springboks coach Heyneke Meyer told www.sarugby.net.

" It's only a short-term appointment as Jean will take over as captain again once he's recovered from his injury.

"Victor was a logical option. He knows the pressure associated with being Springbok captain, as he's been there before, and he has vast captaincy experience at all levels of the game."

South Africa face Wales in Durban on June 14, then Nelspruit seven days later, while they meet Scotland in Port Elizabeth on June 28.