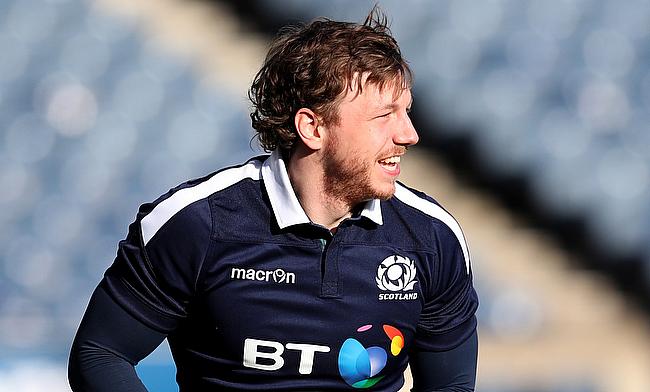 Finn Russell kicked a 68th minute penalty goal as Scotland edged out Australia 15-13 in a closely fought encounter at Murrayfield Stadium on Sunday.

Australia had a chance to open their account in the fourth minute when they won a penalty goal but James O'Connor kicked it wide from a 30m distance.

The 12th minute saw Scotland suffer an injury blow when George Turner left the field with a head injury and was replaced by debutant Ewan Ashman.

The Dark Blues were the first to open their account as Hamish Watson forced his way over following a line out from a five-metre distance near the try line and Russell kicked the conversion to make it 7-0.

Australia had a try ruled out when Michael Hooper dived under the posts but a consultation with TMO adjudged Allan Alaalatoa had a foul play in the build up and was sent to sin-bin in the 37th minute.

As Matt Fagerson was penalised for going off the feet in a ruck, James O'Connor kicked a penalty goal at the stroke of half-time as the teams went into the break with a 7-3 scoreline.

Australia were the quickest to get off the block in the second half with Rob Leota touching down after collecting an offload from Nic White and O'Connor improved it making the scoreline 7-10.

The home side seized the lead back in the 59th minute with Ashman on his debut crossed over after he was sent by Pierre Schoeman but Russell's conversion went wide of the post taking the tally to 12-10.

O'Connor once again put Australia into lead with O'Connor's penalty goal in the 65th minute after Watson infringed but three minutes later Russell slotted a 40m kick to seal a thrilling win.