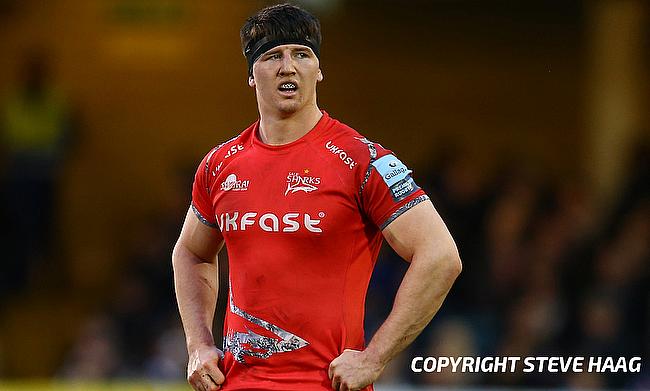 Akker van der Merwe scored a double as Sale Sharks overcame Newcastle Falcons 35-27 in the latest round of the Gallagher Premiership at AJ Bell Stadium on Friday.

This is 10th win for Sale Sharks in 22 games as they keep their play-off hope alive with 61 points while Newcastle are at 11th position.

Newcastle were the first to open their account as George McGuigan touched down in the corner at the back of a driving maul but Joel Hodgson missed out on the conversion. As Sale kicked a penalty into the 22 for a line out, van der Merwe crossed over in the right corner to get Sale off the mark in the 17th minute and Rob du Preez's conversion made it 7-5.

Newcastle pressed forward with Adam Radwan and Alex Tait building pressure with Hodgson diving over the line and also followed with the conversion but once again Sale bounced back with van der Merwe's second coming in the 36th minute. Nevertheless, it was Newcastle, who finished the opening half in front with Hodgson landing a penalty goal to make it 14-15.

Sale were the quickest to get off the block in the second half as Rob du Preez aided in Ben Curry touching down and the try was awarded after consulting with a TMO before Mateo Carreras dotted down in the 14th minute for the visitors making it 21-20.

With Simon Hammersley crossing the whitewash in the 53rd minute, Sale looked comfortable but Rohan Janse van Rensburg was sin-binned shortly reducing the hosts to 14 players temporarily which the Falcons couldn't capitalise. Instead, Ewan Ashman went over for Sale making it 35-20 which proved enough despite a late touchdown from Matias Orlando in the added minutes.