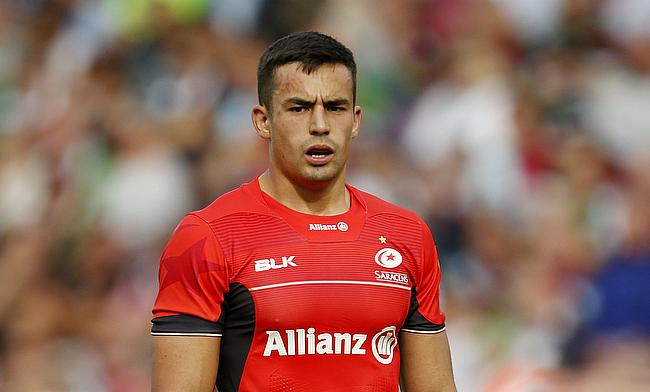 Alex Lozowski contributed with 20 points as Saracens went on to trounce Northampton Saints 30-6 in the latest round of the Gallagher Premiership at cinch Stadium at Franklin's Gardens on Sunday.

Saracens have maintained their second position in the table with their 8th victory in 11 games while Northampton Saints are at sixth position with 30 points.

A scrum penalty provided an early opportunity for Saracens which Lozowski kicked to perfection in the fifth minute to get Saracens off the mark but two minutes later Northampton went on to level the scores with Dan Biggar slotting a three-pointer of his own.

Lozowski missed a chance in the 22nd minute but made amends with another three-pointer two minutes later to put the visitors into a three-point lead. Northampton were then camped on the Sarries line for another spell as we headed towards half time, but another incredible period of defence eventually ended with a penalty, as the bench erupted in celebration.

The scores were levelled at the end of the opening half as Biggar with responding to a scrum infringement from Saracens kicked from the tee as the teams headed into the break with a 6-6 scoreline.

Saracens started the second half briskly as Alex Goode’s 50:22 took them in to the red zone, and then he offloaded to Lozowski, who went over the line and he also followed with the conversion to make it 6-13.

Another infringement from Northampton provided Lozowski another opportunity which he slotted to perfection as Saracens increased their lead to 10 points heading into the final quarter. Any chance of a Northampton comeback was put off with Conor Carey sin-binned for bringing down a maul illegally.

With the numerical advantage on their side, Saracens capitalised on the opportunity as Tom Woolstencroft and Maro Itoje scored further tries as Mark McCall's went on to complete a 24-point victory.