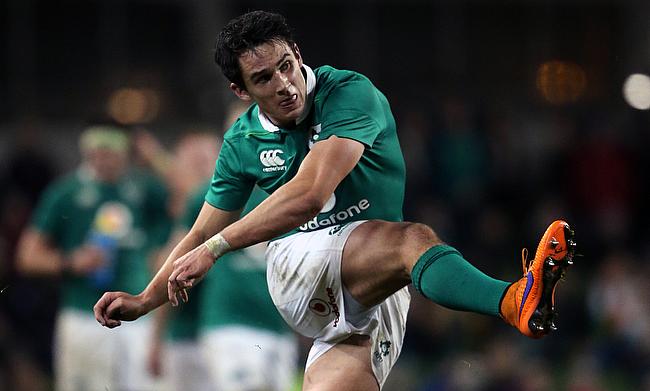 Ireland continued their impressive run against New Zealand as they sealed a 29-20 win at Aviva Stadium on Saturday.

The result means Ireland now have won three out of their last five games against the All Blacks having failed to beat them in the first 28 matches between the two sides. This is also their second consecutive victory over New Zealand at Aviva Stadium played in front of 51,000 spectators.

The game was initially under doubt after an unnamed player was tested positive for Covid-19 but later it was deemed as a false result providing major relief to both the teams.

The All Blacks looked threatening early on when Beauden Barrett's cross-field kick sent Jordie Barrett forward but a combination of Garry Ringrose and Andrew Conway stopped them from scoring. The 13th minute saw New Zealand down to 14 players temporarily after Codie Taylor was sin-binned for a head with a shoulder tackle on Johnny Sexton.

Ireland immediately made use of the numerical advantage with Hugo Keenan releasing James Lowe as he dived over the line in the corner but the conversion went wide as they started with a 5-0 lead. The end of the first quarter saw Jordie with a swift penalty kick help New Zealand reduce the arrears.

Sexton received treatment for a leg injury and as Taylor returned from sin-bin as he grabbed a pass from Dalton Papalii to dot down in the 32nd minute and Jordie improved it making it 5-10 at the end of the opening half.

The home side levelled the scores early in the second half with Ronan Kelleher powered from close range in the 43rd minute but Sexton's conversion struck the posts. Nevertheless, the Ireland captain made amends when Caelan Doris breached the All Blacks defence to crossover in the 52nd minute making. Sexton also followed with his maiden penalty goal in the 56th minute making it 20-10 much to the delight of the home crowd.

The All Blacks did not relent under pressure as Reiko Ioane provided a backpass to Will Jordan to dot down at the start of the final quarter and Jordie kicked a conversion. The gap between the sides remained at three as Carbery, who replaced Sexton as exchanged a penalty goal with Jordie making it 23-20 with 10 minutes left in the game.

New Zealand came close as Akira Ioane touched down but was ruled out following a forward pass. Nevertheless, Ireland ensured there was no slip up this time with two more penalties from Carbery as they sealed a 29-20 victory.