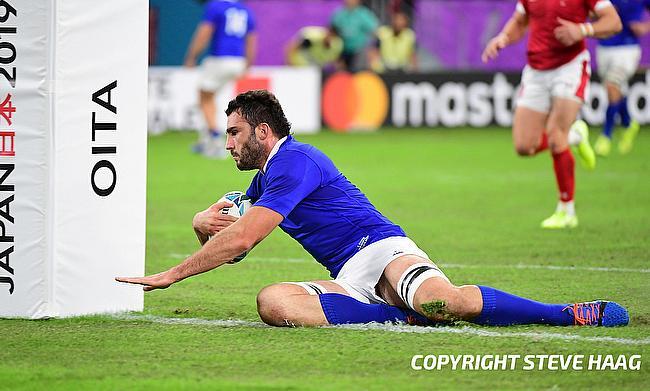 France made a stunning comeback scoring two tries in the final five minutes as they denied Wales the Grand Slam with a 32-30 win in the latest round of Six Nations in Paris.

The first half saw both the teams levelled at 17-17 but Wales had the game in control by the end of the third quarter as they had a 10-point lead and to make things worse for the home side they lost Paul Willemse to red-card in the 68th minute but despite the setback skipper Charles Ollivon and Brice Dulin crossed over in the closing stage to pull out a thrilling two-point win.

Wales managed to get a losing bonus point that took their tally to 20 which means with a superior point difference they are in good position to win the title unless France gets a big win over Scotland in the final game of the tournament to be played on 26th March.

France piled on early pressure on Wales and eventually got the breakthrough when Romain Taofifenua dived from close range and Matthieu Jalibert kicked the conversion to make it 7-0.

Wales responded strongly in the 12th minute as Liam Williams set the foundation for an attacking scrum and Louis Rees-Zammit sent scrum-half Gareth Davies clear only to be stopped by Charles Ollivon. It was Dan Biggar, who eventually went over after coming in from an angle. The fly-half also kicked the conversion to level the scores 7-7.

France seized the lead once again in the 14th minute with this time Jalibert gathered a kick from Brice Dulin to put Antoine Dupont over with the fly-half also kicking the conversion to make it 14-7 but an exciting first quarter came to an end after Josh Navidi burrowed over following a relentless attack from Wales as the scores were levelled at 14-14.

France also suffered a couple of injury blows inside the 30 minutes with Taofifenua and Jalibert replaced by Swan Rebbadj and Romain Ntamack respectively. An infringement from France at breakdown allowed Wales to take the lead for the first time in the game with Biggar slotting a penalty goal in the 25th minute but Ntamack with a three-pointer of his own in the 34th minute ensured the teams were unseparated with a 17-17 scoreline at the end of the opening half.

Wales were the quickest to get off the block in the second half with Biggar kicking a penalty and minutes later flanker Justin Tipuric created an opportunity for Josh Adams to dot down. Biggar kicked the extras as Wales increased their lead to 17-27.

Ntamack brought the gap down to seven points with a three-pointer after Justin Tipuric was penalised for a no-arms tackle but their momentum took a beating as they lost Haouas to yellow-card for collapsing the maul in the 59th minute and Biggar with a penalty kick restored the 10-point lead for Wales.

Just as France looked to return to full strength, they suffered another setback with this time Willemse sent-off in the 68th minute for a foul play on Wyn Jones. Just as Wayne Pivac's men looked in control, they lost Taulupe Faletau and Williams to sin-bin in the 72nd and 74th minutes allowing France to have a one-man advantage which they made to full use as Ollivon dotted down and Ntamack's conversion brought the gap down to three points.

The decisive moment came in the added minutes when replacement lock Cory Hill conceded a penalty goal and Dulin went over allowing France to get away with a two-point victory.