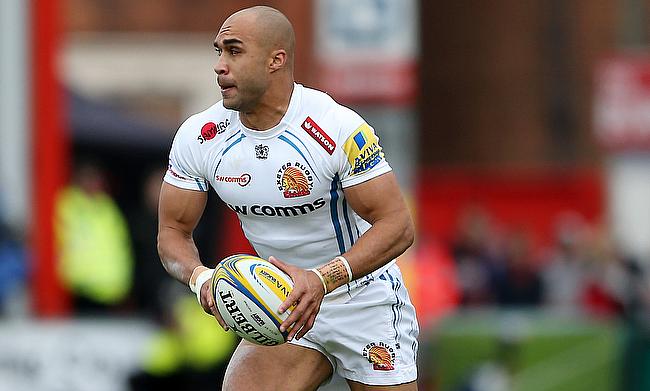 Olly Woodburn was one of Exeter's try-scorer
©PA

Exeter Chiefs survived a opening attack from Lyon as they progressed to the quarter-finals of the Heineken Champions Cup with a 47-25 win at Sandy Park.

The French side were dominating in the opening 10 minutes as they scored back to back tries in a span of three minutes. Rory Arnold set up the opening break allowing scrum half Baptiste Couilloud to go over in the 5th minute and Xavier Mignot followed the suit in the 8th minute after collecting a pass from Charles Ngatai.

Jonathan Wisniewski kicked both the conversions as Lyon raced to a 0-14 lead. The response from the home side came in the 15th minute when Jonny Hill dotted down but Joe Simmonds missed out on the conversion.

Wisniewski with his maiden penalty kick in the 18th minute increased Lyon's lead to 5-17 but the French side's momentum got hampered as they lost prop Vivien Devisme to yellow card in the 26th minute and Exeter seized the opportunity as Hill scored his second and Tom O'Flaherty dived in the corner. Simmonds slotted the extras on both the occasions to take them to a 19-17 lead.

Wisniewski with his second three-pointer in the 35th minute put Lyon back in front but it was short lived as Ollie Devoto scored Exeter's fourth before the break as the opening half ended with a 26-20 scoreline.

Rob Baxter's men maintained the momentum into the second half with Jonny Gray looking instrumental working through Exeter line and eventually Dave Ewers crossed over. Any chance of a comeback from the French side was put off after Xavier Chiocci was sin-binned for collapsing a scrum that also resulted in a penalty try for the hosts as the scoreline became 40-20.

A crossfield kick from Stu Townsend allowed Exeter to complete their seventh try through Olly Woodburn before they lost Jannes Kirsten to sin-bin providing Lyon an opportunity to score a consolation try through Dylan Cretin.