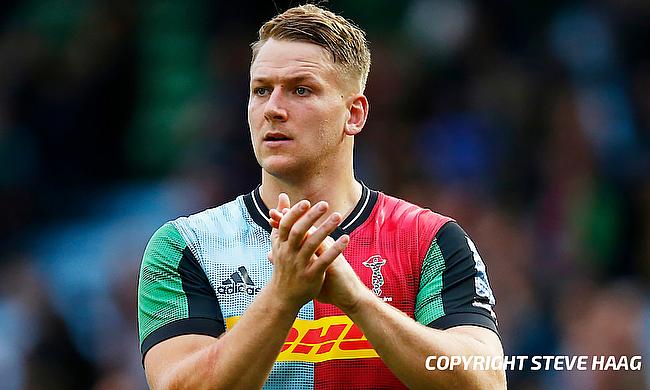 Harlequins managed to survive a late try from Martin Laveau as they sealed a thrilling 20-18 win over Castres in the Heineken Champions Cup clash at Stade Pierre Fabre on Sunday.

The result also brought an end to Castres' winning streak at home as they are yet to lose a game at the venue this year. Their last defeat at Stade Pierre Fabre in an European competition came way back in 2015 with the Quins also being the opponent that time.

Castres suffered an early setback with Teariki Ben-Nicholas leaving the field in the 15th minute but they were the first to get off the block with winger Filipo Nakosi breaching the defence of the visitors and sent an inside pass to Josaia Raisuqe, who went over the line but Benjamin Urdapilleta missed out on the conversion.

The half-hour mark saw Quins get into the lead for the first time in the game with Louis Lynagh diving in the corner at the back of a maul and Marcus Smith kicked the conversion to make it 5-7 but it was short lived as Urdapilleta kicked back to back penalties in the 36th and 38th minutes.

Smith had an opportunity to reduce the arrears before the break but his penalty kick drifted wide as the opening half ended with a 11-7 lead in favour of the hosts.

The England fly-half made amends for his mistake as his penalty goal early in the second half reduced the arrears to one point and they soon went into the lead as Hugh Tizard teed up Dombrandt to cruise under the posts and Smith followed with the conversion making it 11-17.

Another Smith penalty on 73 minutes looked to have sealed it for Quins, but Castres managed to gain possession from the restart and after a couple of phases, Martin Laveau sneaked over the whitewash and Urdapilleta converted to set up a nervy finish.

Nevertheless, the Quins managed to held firm as they maintained their two-point lead in the closing stage to start their European campaign with a win.