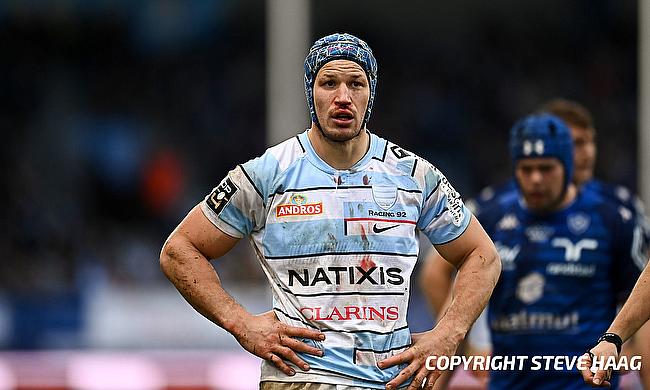 Wenceslas Lauret scored a hat-trick as Racing 92 kick-started their Heineken Champions Cup campaign with a 45-14 victory at cinch Stadium at Franklin's Gardens on Friday.

Maxime Machenaud started the proceedings early with back to back penalties in the 2nd and 4th minutes and shortly Finn Russell and Kurtley Beale created the space for the opening try from Lauret in the 7th minute. Machenaud followed with the conversion as they raced to a 0-13 lead.

Russell was once again instrumental in setting up the second try with this time Juan Imhoff touching down in the 22nd minute. Machenaud kicked a penalty and a conversion on either side as the French side scored 23 unanswered points inside the opening 25 minutes.

The response from Chris Boyd's men came in the 28th minute when a perfect kick from Matt Proctor allowed Courtnall Skosan to score and Dan Biggar followed with the conversion to reduce the gap down to 16 points. Nevertheless, at the stroke of half-time, Russell sent a long pass to Beale, who allowed Imhoff to score his second.

Machenaud missed out on a rare conversion as Racing 92 completed the opening half with a 7-28 lead.

The French side extended their momentum into the second half with an offload from Russell allowed Lauret to dot down but this Machenaud was spot on with the conversion making the scoreline 7-35.

Northampton with a 47th minute touchdown from Fraser Dingwall reduced the arrears down to 21 points, Machenaud with his fourth penalty kick in the 58th minute ensured took Racing's tally to 38 points by the end of the third quarter.

As Laurent went on to complete a hat-trick in the 63rd minute, the game was pretty much sealed for Racing 92. The Saints had a try ruled out but it not make any difference as Racing completed a convincing win.