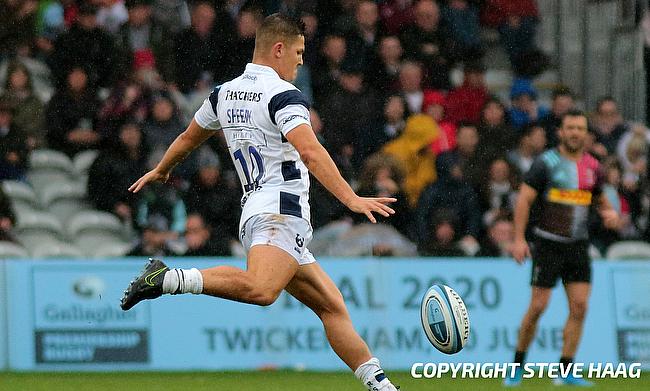 Toby Fricker scored a double as Bristol Bears recorded a 27-5 win over Worcester Warriors at Ashton Gate in the latest round of the Gallagher Premiership on Saturday.

The win is Bristol's third this season as they move to the 11th place in the table with 14 points while Worcester are at 12th position with 12 points.

Bristol took the lead in just the fourth minute with Callum Sheedy kicking a penalty goal and Warriors had a try from Noah Heward disallowed after Jamie Shillcock's pass in the build up was adjudged forward.

Fin Smith was provided with an opportunity to level the scores but his long-range penalty kick went wide. The home side went into the ascendancy as they scored back to back tries at the end of the opening half.

First it was Fricker, who scored in the corner after turning down a penalty advantage in the 36th minute and three minutes later Sam Jeffries raced down in the blindside to dot down but the conversions drifted wide as Bristol ended the opening half with a 13-0 lead.

The Warriors finally showed some resilience as they got their first points in the 49th minute as Heward Noah with his spectacular effort dived over the line but Pat Lam's side claimed their third try in the 51st minute when Tom Whiteley raced 30m to crossover and this time Sheedy kicked the conversion making it 20-5.

The crucial bonus point came for Bristol in the 74th minute when they worked on the right flank and eventually sent Fricker over for his second try and Sheedy improved to complete a 27-5 win.