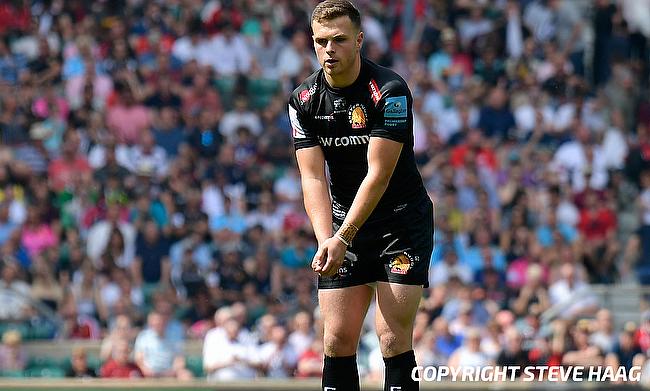 Joe Simmonds kicked a conversion and a penalty
©PA

Exeter Chiefs managed to overcome Bristol Bears with a 20-12 margin in the 17th round of the Gallagher Premiership face-off at Ashton Gate on Friday.

Bristol continue to remain at the top of the table with 66 points but the defending champions Exeter have narrowed down the gap over them to eight points.

While Bristol missed out Semi Radradra and Callum Sheedy due to injuries, Exeter saw England international Jack Nowell make his first start of the season after recovering from injury.

Exeter had an injury scare early in the third minute when Sam Simmonds went down but he continued playing with a strapped ankle. A combination of Andy Uren and Charles Piutau pushed Bristol's attack as they went deep inside into Exeter territory before the scrum-half went over in the 13th minute. Max Malins missed the conversion as Bristol had a 5-0 lead.

The response from Exeter came in the 26th minute with Sam Skinner dived from close range to level the scores but the conversion from Joe Simmonds went wide.

Exeter further extended the lead in the 32nd minute when Joe Simmonds' kick found his brother Sam, who in turn sent Tom O'Flaherty over the line. Joe kicked the conversion and also followed with a penalty goal as the opening half ended with a 5-12 scoreline.

The visitors were the quickest to get off the block in the second half when Jacques Vermeulen powered his way over in the 55th minute extending the lead to 5-20 before Luke Morahan with his try in the 78th minute provided some consolation to Pat Lam's side.

Bristol will lock horns with Bath Rugby next in the 18th round at Recreation Ground while Exeter Chiefs will host Worcester Warriors at Sandy Park with both the games scheduled on 8th May.