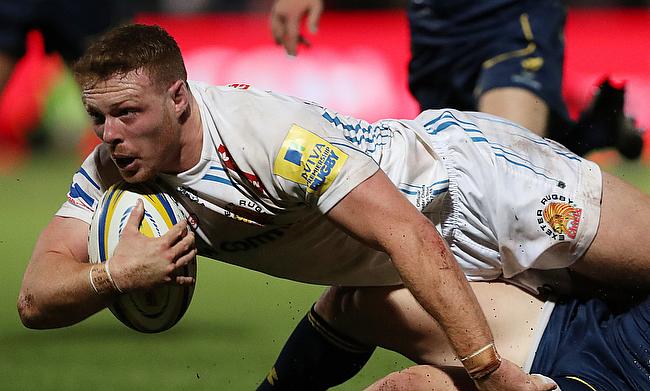 Exeter Chiefs managed to end their losing streak as they edged out Bath Rugby 23-16 in the latest round of the Gallagher Premiership at Recreation Ground.

This is fifth win for Exeter in nine games as they climbed to the fifth place with 24 points while Bath are languishing at the bottom after losing all their eight matches.

Bath started the proceedings very early as pressure at scrum allowed them to earn a penalty goal which Orlando Bailey kicked to perfection to make it 3-0. The response from Exeter came immediately in the 8th minute Henry Slade kicked a three-pointer of his own to level the scores.

At the end of the first quarter, Bath extended their lead further as Josh McNally marshalled the throw from Tom Dunn and eventually Miles Reid forced his way over at the back of a rolling maul and Bailey's conversion made it 10-3.

Slade helped Exeter reduce the arrears with his second penalty goal in the 28th minute but missed another chance in the 38th minute as the teams went into the break with a 10-6 scoreline.

Exeter had a perfect start to the second half as Josh Iosefa-Scott dived in the corner and Slade improved ensuring they went into the lead for the first time with a 10-13 scoreline but the scores were levelled in the 48th minute with Bailey slotting a three-pointer after the Chiefs were kept under high sustained pressure.

With Slade missing his second penalty chance, the scores continued to remain level as the game entered the final quarter. Bailey's kick from the tee provided Bath the much-needed lead in the 64th minute but it was Simmonds brothers, who sealed the game for the Exeter in the final five minutes.

First it was Sam Simmonds, who dived over at the back of a scrum and Joe followed with a conversion and a penalty goal to help Rob Baxter's men end a three-game losing streak.