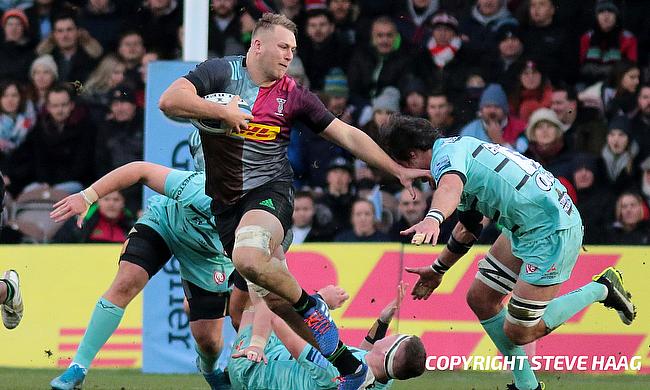 Harlequins managed to hold off a second half fightback from Bath Rugby as they sealed a 28-15 win in the 8th round of the Gallagher Premiership at Recreation Ground.

The Quins had a 21-3 lead at the end of the opening half and were greatly aided by Bath's back to back yellow cards to Semesa Rokoduguni and Josh Matavesi as they registered their fourth win from eight games to move to fourth place. Bath are positioned at 10th place after losing their sixth game in eight matches.

An early infringement from Harlequins saw Rhys Priestland get Bath off the mark with a fourth minute penalty goal. However, the Quins levelled the scores two minutes later after Bath forwards were penalised for off side and Marcus Smith slotted a penalty kick.

The visitors soon seized the lead after Louis Lynagh made an inside pass to Mike Brown, who found Danny Care as he sent Alex Dombrandt over the line in the eighth minute and Smith improved it making the scoreline 3-10.

Smith looked impressive as he kicked another penalty goal in the 18th minute following an infringement from Miles Reid after the Harlequins fly-half was forced to leave the field following a fierce tackle with Joe Cokanasiga.

James Lang, who came off the bench in the 22nd minute immediately made his presence felt with a penalty kick to take the scoreline 3-16 and it became 3-21 shortly after Aaron Morris dotted down the visitor's second try.

Bath were the quickest to get off the block in the second half when Tom Dunn powered over the line at the back of a line out maul and Priestland's conversion made the scoreline 10-21.

However, any chance of a Bath comeback was put off when Rokoduguni was yellow-carded for a deliberate knock on and immediately Danny Care brushed away an tackle from Josh Bayliss to dot down and Lang improved to make it 10-28.

In the 53rd minute, Bath were punished again with this time Matavesi yellow-carded leaving down to 13 men temporarily. Even though Bath did well not to concede any more point, Harlequins' dominance proved enough despite a late try from Tom de Glanville in the end.