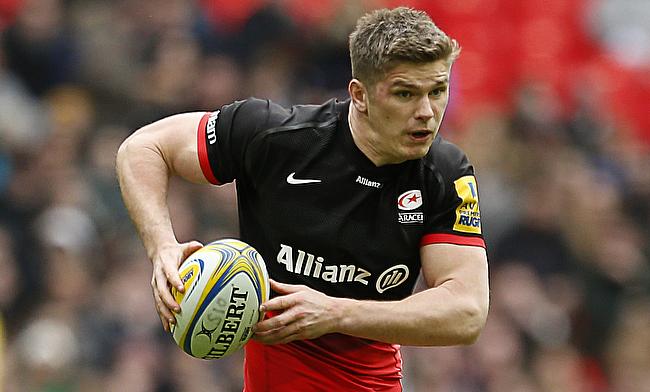 The 25-year-old, who has been an integral part of England's success under head coach Eddie Jones, suffered the injury prior to the start of the Aviva Premiership season and is yet to play a game for Saracens in the 2016/17 edition.

With England already missing the services of James Hasklell, Jack Clifford, Mako Vunipola, Sam Jones and Anthony Watson, Farrell's inclusion will be vital for England as they head into the autumn internationals.

Despite, sounding positive on Farrell's rehabilitation, McCall said they are yet to ascertain on the return date of the star fly-half.

"Owen trained on Thursday and trained as part of the opposition. That's a good, encouraging sign," Saracens director of rugby Mark McCall said.

"The scan he had last week came back positively, so that's good. It's really a case of when can Owen do all the things he needs to play. Once he can, he'll play.

"He hasn't placed kicked, but he's kicking out of hands. I'm not sure if he'll be fit for the Toulon match, but his ability to go straight back in would be a consideration.

"I'm nervous about saying too much about it because he's just done a 45 minute training session and looked pretty good, but it's how he feels over the next 24 hours that's the important thing."

However, Alex Goode is certain to miss Saracens' upcoming clash against Wasps with a knee injury.

"It's not bad, it's not an unstable knee, it's just badly swollen. Every time he plays it swells up again, so we need to settle it down with Toulon in mind," McCall said.