England wait on fitness of Owen Farrell and Dylan Hartley 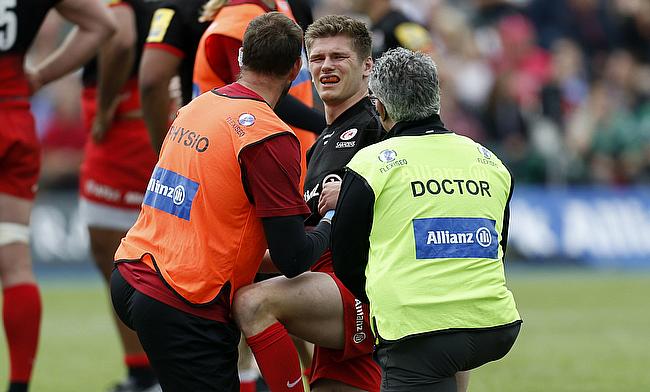 Owen Farrell is an injury concern for Saracens and England
©PA

England are facing growing concern over the fitness of Owen Farrell and Dylan Hartley as they begin preparations for their autumn campaign.

Two of the squad's most influential figures are suffering from back problems and due to the uncertainty shrouding their injuries, neither has been set a definitive date for their return.

Farrell is causing the greater worry as the pre-season niggle that was expected to sideline him for the opening round or two of the Aviva Premiership is drifting into a second month, with no immediate end in sight.

The Saracens playmaker will undergo a scan on Thursday to rule out anything more sinister than the initial prognosis, but his difficulty kicking comes as England begin the build-up to their Twickenham fixtures against South Africa, Fiji, Argentina and Australia.

A 32-man squad will gather in Brighton on Sunday for a three-day training camp, when Farrell would have begun turning his attention to filling the inside centre berth against the Springboks on November 12.

"It's a back injury but it's not one where the physios are able to tell you he will be back by this or that point," Saracens director of rugby Mark McCall said.

"It depends entirely on how he feels and on what he can do. And he just can't do enough things to get him on to the pitch to play.

"Last week he took more or less a full part in training but there were a couple of things he tried to do but couldn't. Until he can do those things, he can't play.

"He might be able to play next week but he might not. Straight-line stuff he can do but kicking... he struggles to kick properly.

"An operation doesn't appear to be an option, it's just time he needs. We don't think there' a worst case, we think it's a matter of weeks."

England will hope to face South Africa with a player who was instrumental in their Grand Slam success and 3-0 series whitewash of Australia, not least because of his metronomic goalkicking.

Also causing anxiety is the fitness of Hartley, the captain for all nine Tests since Eddie Jones took charge in December.

The Northampton hooker has not played since September 11 and while he is improving, director of rugby Jim Mallinder is reluctant to choose in a match for his comeback.

"Dylan has started running again this week. We are hoping he'll return in the next couple of weeks. I don't want to set a date. We're hopeful for a couple of weeks," Mallinder said.

"It's a spasm in his back. We don't want to push it too hard, push too much load through it, in terms of scrum or weights.

"I think it was probably a bit sore before the game when he came off against Bristol. We took him off at half-time.

"We're hopeful that once he gets back he's back properly. You could push him and he could probably play this weekend.

"What we don't want is to play him for 40 minutes and for him then to be out for another two weeks.

"We want to get it sorted properly so that hopefully it won't be affecting him for the rest of the season."

Jones has expanded his backroom staff by appointing World Cup winner Richard Hill in the role of team manager.