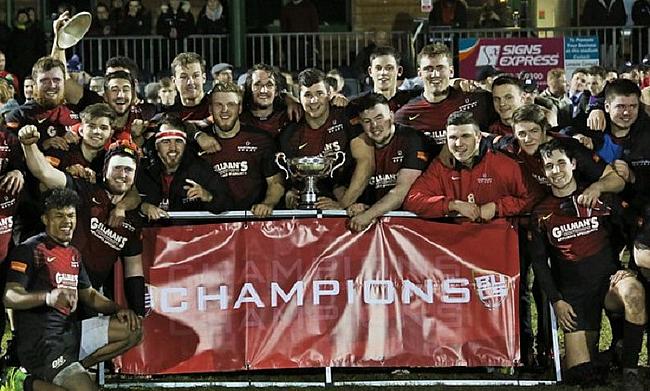 College beat the Midlands side 17-12 to continue their journey to Twickenham and John Barnes’ men will now be considered favourites for the league and cup double after 12 wins from 14 matches this term.

Hartpury’s last appearance at the home of English rugby came three years ago and they will take some stopping to deny them a chance of gracing the hallow turf once again.  After this defeat, Loughborough will have to wait to see if they have a home quarter-final as third placed Exeter still have a game in hand which could see them snatch second place off last season’s runners-up.

The Green and Whites claimed the bragging rights in the South-West derby against Bath, who themselves must now take part in a play-off against a side in North A or South A after they failed to sneak into the top four of BUCS Super Rugby.

The other side joining Hartpury, Loughborough and Exeter in the last eight automatically are Durham after they beat Cardiff Met yesterday.

Elsewhere across BUCS this week, Nottingham Trent were crowned champions of North A and will take part in the play-offs to try and reach the BUCS Championship and  they will be joined by either Leeds or Newcastle. In South A, the league title is yet to be decided but Bristol and Cardiff will take part in the play-offs against the bottom four in BUCS Super Rugby for a place in the quarter-finals.

There was also BUCS Trophy action yesterday as some of our featured sides progressed into the last eight of the top university cup competition.

Hartpury College’s sensational season continued as they were crowned the inaugural winners of BUCS Super Rugby after they beat Loughborough.

College’s 1st XV are currently top of National One and on course for the league championship, but their first piece of silverware was confirmed last night as they university side clinched the BUCS title and a place in knock-out phase of the competition.

In a pulsating match, John Barnes’ side led 10-6 at the break through a try from England U20 international Harry Randall.

Loughborough, who finished runners-up at Twickenham last year, responded via a third penalty from Owen Waters.

However, the hosts scored the decisive try thereafter as Scotland’s Alex Craig dived over while Sam Leeming added the conversion to secure the title for Hartpury.

Hartpury College Director of Rugby John Barnes told TRU: “It's a great achievement to win the first super league title. The competition this season has been a level above with the new format. Week to week the challenges are immense and to come out of the 14 game league season on top is a terrific effort from the squad, coaches and support staff.”

“For the league to go to the last Wednesday of the competition is brilliant. To beat such a strong sporting institution as Loughborough on our home ground to win the league is a superb achievement from all involved.

“Finishing in the top two confirms you have a home quarter-final in March. We have a few weeks off now before then. We are fully aware how tough it will be to win the Championship but we now have to focus on trying to do the inaugural double of league and cup successes!”

Two tries apiece from Jack Owlet and Simon Linsall helped Exeter stay on course to finish second in the table after they beat Bath in the South-West derby at Sandy Park.

Owlet and Linsall both went over in the second-half after a tight first period which ended 13-12 to the hosts.

A score from Mat Eliet and eight points from the boot of Ted Landray nudged the Green and Whites ahead, but Bath were still very much in this contest at the break thanks to  tries from George Frampton and Will Britton.

Owlet extended Exeter’s lead after the interval, but Bath kept on the heels of their rivals as Scott Russell dotted down.

However, the current BUCS champions were rampant in the remainder of the half as Owlet completed his brace while Linsall grabbed a double and Chris Swash also touched down to help Exeter win comfortably.

Durham have secured their place in the quarter-finals of the BUCS Championship after a narrow victory in Wales over Cardiff Met.

The visitors knew a victory knew a win would secure them a place in the top four of BUCS Super Rugby while Cardiff Met were looking to head into the play-offs on a high.

Hooker Jack Beazer touched down early in the first-half and Nathan Holmes crossed in the second-period for the north-east side while Charlie Norman slotted seven points.

Last Friday, Northumbria picked up their third win of the season as they beat Leeds Beckett 27-10 at Kingston Park. The hosts now have one game left to play in the domestic campaign against Exeter next week while winless Leeds Becektt have completed this term losing all 14 of their matches.

Nottingham Trent were crowned North A champions yesterday as they sealed a 53-5 win over Bishop Burton. Trent have won nine of their 13 matches this term and now await their play-off opponents.

In addition to this, third placed Durham 2nds beat Birmingham 18-17 yesterday, but the same rule applies to the north-east side as their 1st XV are already in the competition. Leeds can mathematically finish second as they have a game in hand against Newcastle next Wednesday, but it is between them and their opposition next week for that all important play-off place.

Newcastle were beaten 42-12 by Nottingham yesterday, but the north-east side have two games in hand and they are seven points behind Loughborough as things stand. Two victories for them would see them book their place in the play-offs.

Bristol took a huge step towards the South A title yesterday as they beat Hartpury 2nds 28-3 at home to tighten their grip on top spot. Bristol are now four points clear of Cardiff with a game in hand and they have also booked their place in the post season play-offs after their 10th win of the campaign.

Second placed Cardiff are also in the end of season play-offs as a 26-7 win over USW means they have secured a top two finish, but they can still win the South A championship. Cardiff take on Exeter 2nds on Sunday before a crunch match at home to Bristol next Wednesday which will decide the destination of the South A crown.

In Northern 2A, Manchester Met took a huge step towards the league title as they narrowly beat rivals Liverpool 19-17. Man Met are eight points clear of Liverpool with a game to play, but the Merseysiders still have three matches left of the season so the race for the league championship is far from over. Elsewhere, third placed Keele beat UCLAN 10-6 while Bangor secured their third win of the season thanks to a 21-14 victory over Chester.

Sheffield Hallam have edged closer to the Northern 2B title as they beat Newcastle 3rds 34-19. Hallam are 13 points clear of third placed York who are now the only team who can catch the Steel City side.

This is because second placed Leeds Beckett 3rds only have one game left to play and they are currently seven points behind Hallam despite victory yesterday over Northumbria 2nds while York kept their title chances alive with a 27-19 win over Leeds 2nds. York have three games left to play this term including against Sheffield Hallam next month, so they know they cannot afford to drop more points between now and then.

In Midlands 2A, Coventry are top of the pile after a 36-0 win over Harper Adams 2nds. Their lead is only three points though after Nottingham 4ths beat Warwick 12-3 away from home and Notts have played the same amount of games (7) as the league leaders. The other result in Midlands 2A this week saw Birmingham 3rds beat Nottingham Trent 3rds 22-10.

The BUCS Trophy returned for the last 16 this week and the top two in North B clashed as Durham 3rds hosted Edinburgh. The league leaders Edinburgh have lost just once all season and carried that form into this cup tie as they beat Durham 20-9 in the north-east.

A fellow North B side also progressed to the last eight as St Andrews beat Leeds Beckett 2nds 31-29 in a thriller, but there wasn’t joy for Manchester who lost 38-12 at home to Glasgow. South B table toppers Exeter 3rds are also through to the quarter-finals after a 32-5 win over Plymouth.

Sheffield are currently second in Northern 1A, but they have been knocked out of the BUCS Trophy as they were beaten 24-21 by the newly crowned Midlands 1A champions Leicester. Competing alongside Leicester this season have been Harper Adams University and they too are into the quarter-finals after an 11-7 win away at Reading.